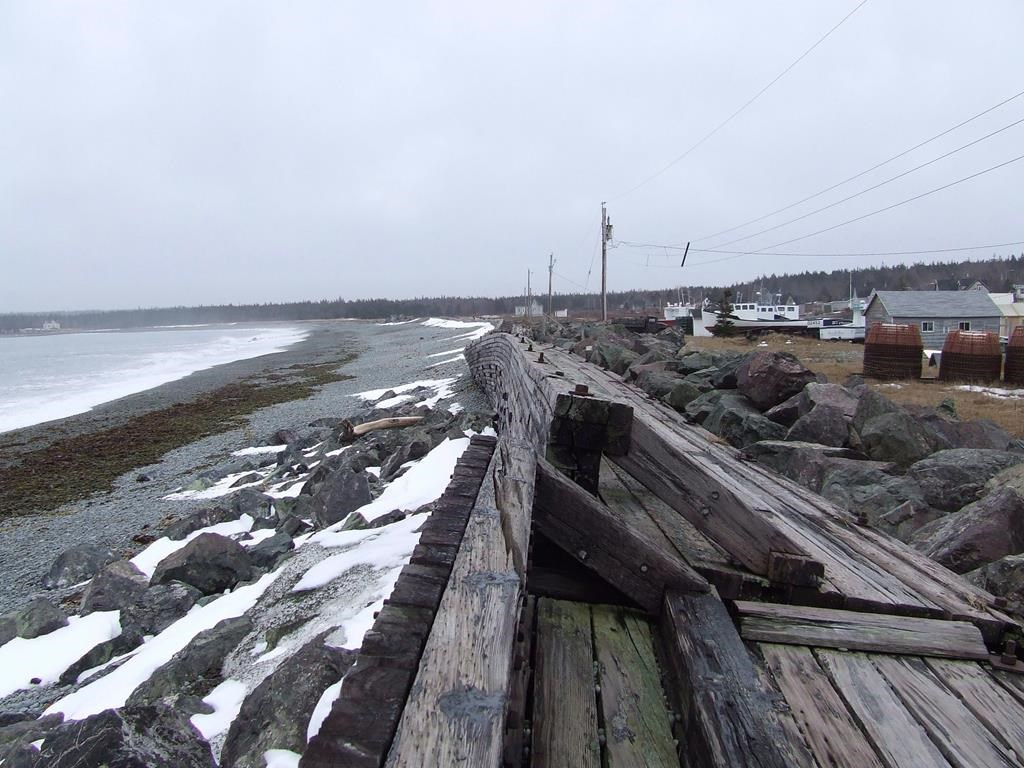 A seawall in Gabarus, N.S. is shown in this handout image. For decades, a seawall made of timber and rock protected the tiny 300-year-old fishing village in Cape Breton from the punishing waves of the Atlantic. Handout photo by Gene Kersey
Previous story

They feared being swallowed by ocean, but the 78 residents of Gabarus, N.S., never waved a white flag before the federal government.

For decades, a seawall made of timber and rock protected the tiny 300-year-old fishing village in Cape Breton from the punishing waves of the Atlantic.

But as the 70-year-old structure started to crumble, the very existence of Gabarus was under threat — and governments were not helping, each level claiming the wall was not its problem.

The plight of Gabarus sparked a years-long battle with Ottawa and kindled a community spirit that has banded together life-long residents with newcomers who settled in the scenic town for its beauty and simplistic way of life.

Their story is chronicled in a new documentary titled "Only 78," set to screen at the Atlantic International Film Festival on Sunday in Halifax.

"The people of Gabarus are remarkably resilient and inspiring," said Toronto filmmaker Jawad Mir, the film's creator. "They've shown that it doesn't matter how small you are, you can fight. You just have to go for it."

Residents of Gabarus have long argued that Ottawa, which built the seawall in the 1940s, owns the structure and is responsible for maintaining it. But the Fisheries Department has repeatedly said the wall sits almost entirely on Nova Scotia-owned land and is therefore a provincial and municipal responsibility.

"Who cares who owns it? We need to have responsible people step forward and say that this isn't right. We need to have it fixed... The Atlantic Ocean doesn't give two hoots about us, but our elected representative really should care," Gabarus resident Heather Hayes said during a public meeting in Sydney, N.S., that is shown in "Only 78."

If the wall was breached, it would put at risk the local fishing industry — its only economy — as well as road access to the village, and many homes. It failed before in the 1980s and was fixed by the federal government, according to research compiled by Gabarus residents.

A powerful storm in 2010 that battered the seawall made matters worse, adding to the urgency.

Tim Menk, 64, and his partner Gene Kersey, 71, moved to Gabarus from the United States in 2008 and realized the community was "under existential threat."

Armed with hundreds of documents and the blessing of the village's elders, Menk and a small group of residents set out to fight for funding to repair the seawall.

The Friends of Gabarus Society was born and claimed to have evidence that the seawall was the federal government's responsibility — a notion outright rejected by Ottawa on many occasions.

"Those of us who arrived found ourselves enchanted by this place and by its lovely people who were so welcoming... It didn't matter that we were biracial gay couple from the States. And we felt we owed something to the community because they have given so much to us," said Menk.

Mir said he was drawn to the story of Gabarus after reading a newspaper article in April 2013. He self-funded the film, travelling to Cape Breton several times over four years on his own dime, inspired by the relentless advocacy in Gabarus and aiming to help their cause.

"There are many communities across Canada under similar threat, so I thought it was important to tell their story," said Mir. "I'm always about the underdog."

After eight years of meetings, media interviews and even a complaint filed with the Public Sector Integrity Commissioner’s office, Gabarus eventually won repairs for its seawall in early 2014 through a $700,000 shared-funding agreement with three levels of government.

It served as a catalyst for continued community activism in the historic fishing village. Gabarus also won funding to move its 125-year-old lighthouse away from a cliff's edge to escape coastal erosion, and its residents raised money to expand the local firehall — all of which gained tiny Gabarus a community spirit award from the lieutenant-governor.

Menk said he hopes the story of Gabarus inspires other small communities to take on governments, noting that "Only 78" also touches on the experience of Little Anse, N.S., which has lobbied Ottawa — so far, unsuccessfully — to fix its breakwater.

"We're in the same leaky boat together in these coastal communities," said Menk. "Row in the same direction. Unless we do that, we have little chance of survival in the long term."

Screen group versus premier: 'The film industry is good for Nova Scotia'