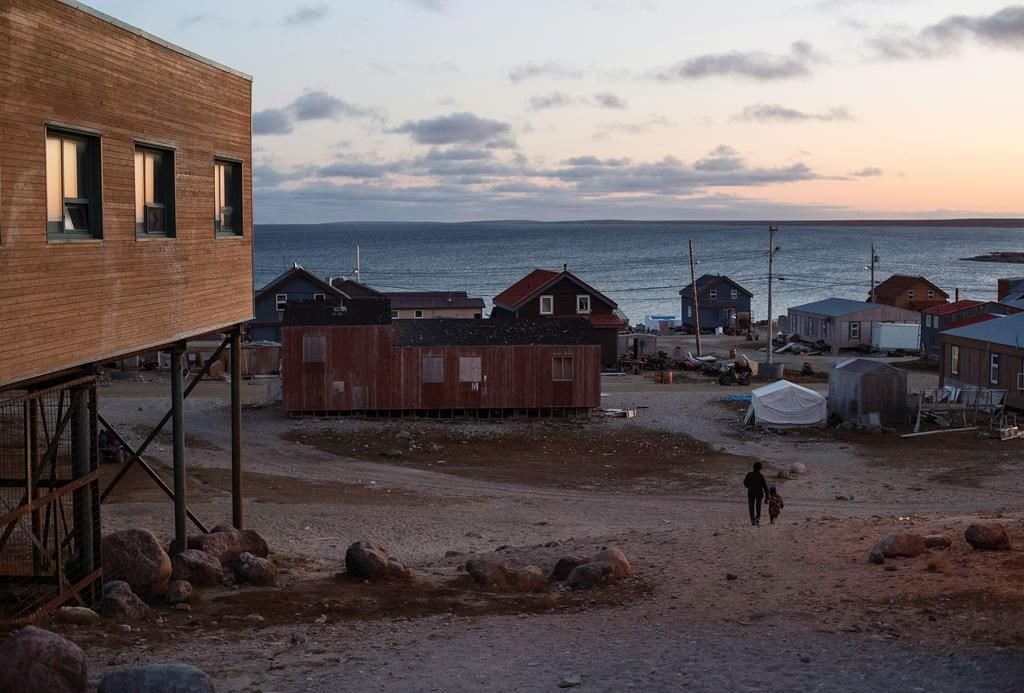 Residents walk down the hill to their home in the town of Gjoa Haven, Nunavut, on Friday, September 1, 2017. File photo by The Canadian Press/Jason Franson
Previous story
Next story

It's cool and cloudy as Don Sessions, wearing a toque and a good, solid jacket, hops off an inflatable boat that has ferried him from his cruise ship to shore.

The welcoming facilities in Gjoa Haven, Nunavut, are primitive — a stretch of pebbly beach marked off with yellow police tape. Sessions and his fellow tourists will walk up a dusty dirt trail into town to stroll its dusty dirt roads.

He's having a ball.

"I'm loving the trip," says Sessions, a self-described Franklin Expedition nut who has travelled from St. Louis to visit the Arctic hamlet near the site of Sir John Franklin's shipwrecks. "When you were a kid, this is what you dreamed about, if you dreamed about the North."

"It's going to be huge," says Cheetham, Gjoa Haven's economic development officer. "There's a lot of interest on the cruise ships now."

Sessions' ship, the 166-passenger French-flagged Le Boreal, is one of six that will stop in Gjoa Haven during this year's six-week season — two more ships than last year.

Franklin's ships Erebus and Terror set out from England in 1845 with 129 men to search for the Northwest Passage, but they never returned.

Gjoa is uniquely placed to take advantage of the discovery of the ships. It's the closest community to where both the Erebus and the Terror finally went down.

It's an economic opportunity in a place that doesn't have many of them and the community is making big plans to capitalize.

Then there's an expansion of the local Nattilik Heritage Centre to include Franklin displays, expected to take a large share of the nearly $17 million budgeted by Ottawa in 2016 for conservation, research and presentation of the artifacts.

Cheetham says new facilities for Gjoa's highly regarded carvers and even tours to the Erebus site are also in the works.

"It's huge relative to what we had in the past, and it's growing."

As well as Franklin, Norwegian explorer Roald Amundsen moored his ship here in 1903 and stayed for nearly two years. His ship was named the Gjoa.

"You have the two British ships that didn't survive and then you have Amundsen who made it through the Northwest Passage and into the Antarctic," says Cheetham. "He did survive because he learned how to live with the people here — learned all the skills, all the clothing, how to stay alive."

It's not hard to find people with fond family memories of Amundsen in Gjoa Haven.

"We pass those stories on from generation to generation," says Jimmy Arqviq, whose great-grandfather knew Amundsen.

Cruise tourists are met by a local guide who shepherds them through a tightly scheduled program of local art, performances and traditional food. The tour costs $50 a head, which goes to pay guides and performers.

Cheetham says figures on how much tourists spend while in the community are being developed.

"Average spending has been low in the past off the cruise ships. But a lot of that's about how we haven't had the promotional stuff on the cruise ships in advance to prepare them for what they might be able to purchase here, and that's changing."

The community is adding infrastructure such as ATM machines to make it easier for visitors to part with their money. Other communities report the average tourist leaves behind $90 on a shore visit.

Gjoa Haven is remote and expensive to visit. It offers little in the way of amenities — restaurants, for example. But because it's so small, even a little economic activity can go a long way.

But just as explorers charted the Northwest Passage little by little, Cheetham says their stories are slowly building an economy in the community at the heart of their adventures.

"One thing builds on another."