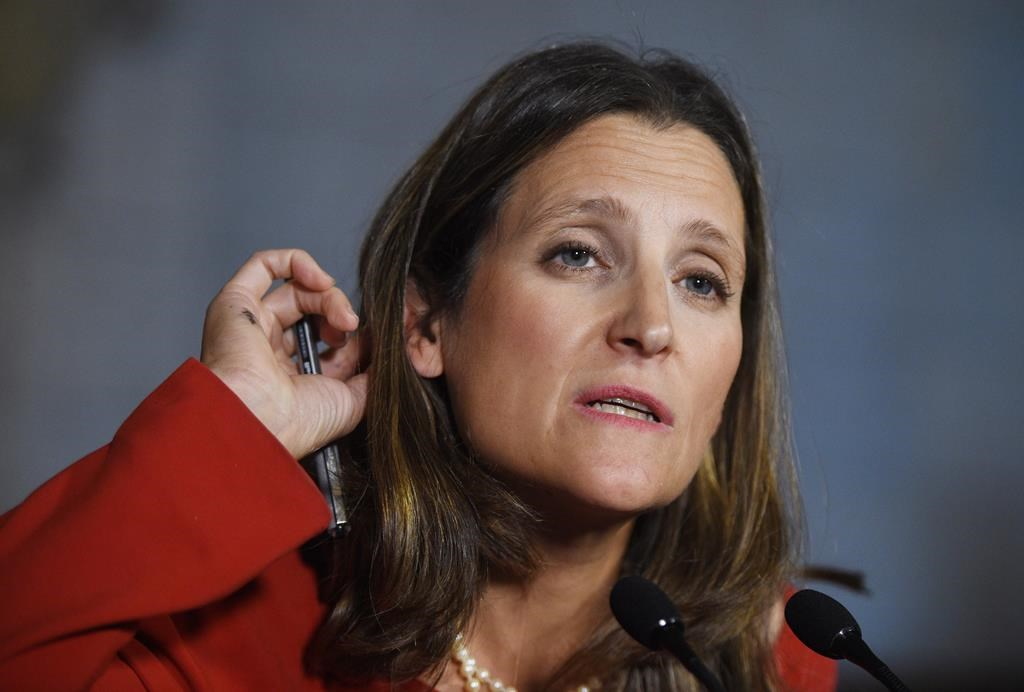 Foreign Affairs Minister Chrystia Freeland listens to a reporter's question as she holds a press conference on Parliament Hill in Ottawa on Monday, Aug. 14, 2017. File photo by The Canadian Press/Sean Kilpatrick
Previous story
Next story

Canada's foreign affairs minister says the government is very concerned about the plight of Rohingya Muslims in Myanmar and plans to speak up on their behalf.

Chrystia Freeland says both she and Prime Minister Justin Trudeau plan to "focus" on the issue at next week's United Nations General Assembly in New York.

She did not elaborate on the specific actions she or Trudeau plan to take.

Freeland also told a Toronto rally in support of the Rohingya that she also discussed the issue with Kofi Annan, the former UN Secretary-General who is currently leading a commission investigating the crisis unfolding in Myanmar.

She says another key focus for Canada is getting the ambassador into the area of heaviest conflict to report first-hand on the situation.

Myanmar's powerful military is accused of torching the homes of 400,000 Rohingya Muslims, forcing them to flee to neighbouring Bangladesh as refugees. Myanmar's leader, Aung San Suu Kyi, has come under harsh international criticism for failing to speak out against the violence, with some arguing she should be stripped of both her Nobel Peace Prize and her honorary Canadian citizenship.

Freeland did not address those concerns, but told the rally that Trudeau expressed his "very strong condemnation" of the treatment of the Rohingya directly to Suu Kyi earlier this week.

Freeland said Trudeau also asked Suu Kyi to "raise her voice" on behalf of the Muslim minority in her country.

Officials speaking on condition of anonymity have said Canada has been reluctant to overtly blame Suu Kyi for the violence against the Rohingya because it believes Myanmar's military is using it to undermine her global reputation.

Canada believes elements in Myanmar's powerful military see the current crisis as an opportunity to weaken Suu Kyi's ambitions to bring democracy to their country.

Officials have said Freeland recognizes that Suu Kyi is in a precarious political position because she does not control the actions of her military, which once ruled her country with impunity and placed her under house arrest before she prevailed and won power in democratic elections.

Freeland did not offer details on the substance of what she or Trudeau plan to do at the UN Assembly, but did say the issue is one that both would be "focusing on."

Freeland also emphasized the importance of gaining ambassadorial access to Rakhine State, the scene of much of the violence. Officials have previously said that Myanmar has rebuffed several recent requests by Canada and other western countries to send envoys into Rakhine for a first-hand look.

"Our ambassador is seeking access to Rakhine State," Freeland told the rally. "We would like our ambassador to go there so we can have Canadians seeing first-hand what is happening."

Another rally in support of the Rohingya is planned in Ottawa for Sunday afternoon.

The 72nd session of the UN General Assembly is slated to get underway on Tuesday.