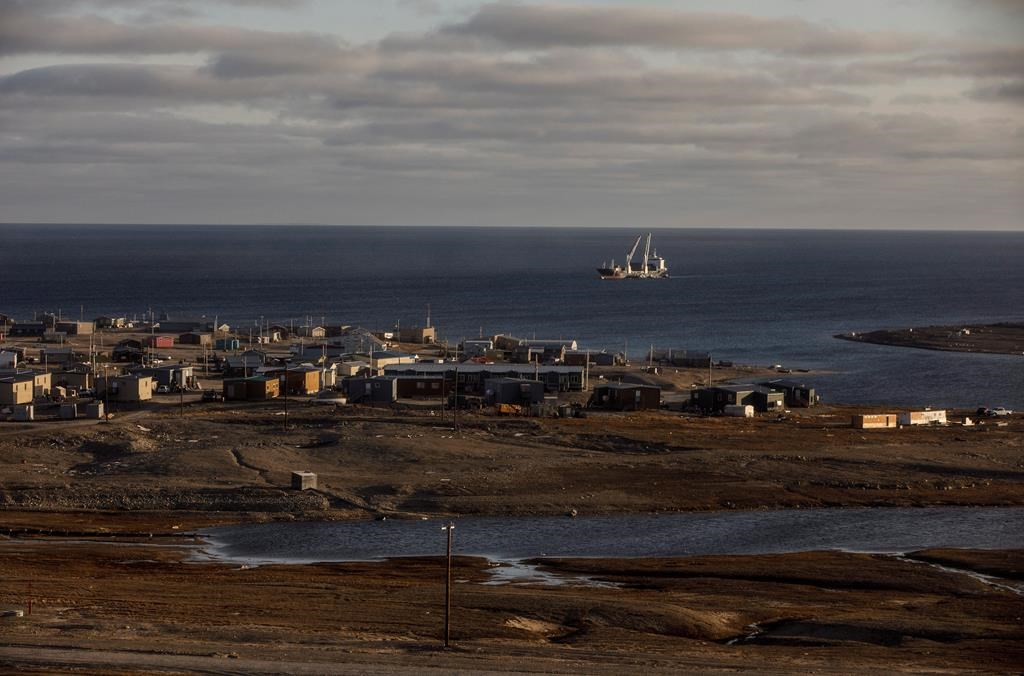 A cargo ship sits in the bay of Gjoa Haven, Nunavut, on Friday, September 1, 2017. File photo by The Canadian Press/Jason Franson
Previous story
Next story

Full fathom five John Franklin's ship lies and of its bones are stories made.

With apologies to William Shakespeare, few shipwreck tales have seen as much sea-change as that of the HMS Erebus. The tug of war over how Franklin history is told is almost as rich and strange as the story itself.

"There is a set of facts. Those men all died," says Adriana Craciun, a Boston University professor who has written extensively on portrayals of the doomed expedition.

Franklin's ships Erebus and Terror set out from England in 1845 with 129 men to search for the Northwest Passage, but they never returned.

A message found in 1859 by a search vessel said both ships were trapped in ice in late 1846 and remained so for about 18 months. It added that in April 1848, 105 survivors headed out on foot. None survived.

After it became clear the expedition had gone badly wrong, 19th-century Victorians painted Franklin and his men as heroes, says Craciun.

"They were martyrs to science."

Searchers, such as John Rae, who brought back unsavoury tales of cannibalism were harshly criticized. Rae suffered significant harm to his career for suggesting British gentlemen would stoop so low.

In the next century, the narrative gradually changed. Franklin became an example of imperial arrogance by refusing to learn from the local people, suffering and dying miserably as a result.

"At a time when international interest in the Arctic region is growing, finding this Franklin ship bolsters Canada's claim to Arctic sovereignty," said then-prime minister Stephen Harper in 2014 after the Erebus was located.

Harper called Franklin "a great Canadian story" and said the ship's discovery was "a great day in mapping the history of our country."

It wasn't that different a view of Franklin than that held by the Victorians, says Craciun. It simply altered the cause for which Franklin died.

"There was a serious political use," Craciun says. "(Harper's Conservatives) were trying to sanitize and romanticize (the wreck) and make it the foundation of a national Arctic sovereignty.

"It transforms a complex human and political and colonial event into something that can be celebrated in a rather simplistic and destructive way."

Now, Franklin is becoming a different kind of Canadian story. He's being seen through the eyes of the Inuit as another in a number of European explorers, traders and whalers.

"I first started hearing stories as far as I start remembering, maybe age six or seven," says Inuit historian Louie Kamookak, who's been collecting Inuit oral history and cross-referencing it with journals and logbooks for 30 years.

"When I started going to school, maybe at the age of 12, that's when the teacher started talking about the Franklin Expedition. How it happened on King William Island. How all of them died. They didn't get back. The ships were never found.

"That's when my grandmother's stories started linking to a teacher that was talking about the same people. As I got older, I started interviewing elders asking elders about stories. That's when it all started."

The Inuit have detailed accounts of European visits going back to Martin Frobisher in the 1500s. Enough expeditions ended in shipwreck to cause the Inuit to change their travel and trading patterns to take advantage of the scarce wood and metal resources the sites offered.

"The Netsilik Inuit may have extended their territory to the southwest to take advantage of the Franklin wrecks," says Parks Canada archeologist Ryan Harris.

"It's true not just of these ships. The Copper Inuit (further west) all of a sudden had a resource base that really gave them a strong advantage in trading."

Kamookak's own great-great-grandfather had a Franklin dinner knife that he turned into an ice chisel.

"Inuit are more involved. They're a lot happier to be involved (rather) than seeing people come up searching with no contact with the Inuit ... and the Inuit are kind of back stage, watching."

Some Inuit groups even maintain their land claim gives them ownership of the Franklin ships.

Kamookak says the years in which the expedition was lost were so tough the Inuit themselves fled the region where the ships were found.

"When Franklin was here it was a bad year," he says. "There are stories about the ice not thawing out and the Inuit having to move for survival. It was very hard for Franklin's men to get help from the Inuit."

Franklin was a skilled explorer who followed his orders from the Royal Navy to the letter, says Marc-Andre Bernier, Parks Canada's head underwater archeologist. He says it wasn't Franklin's fault they took him into the most ice-choked part of the Arctic in years of especially bad ice.

"I think his reputation needs to be rehabilitated."

"You have multiple, overlapping claims by different governmental and non-governmental groups, and that's new. To some extent, (Inuit) groups are trying to re-indigenize those ships, those spaces, those histories and fold them into a larger Indigenous history."