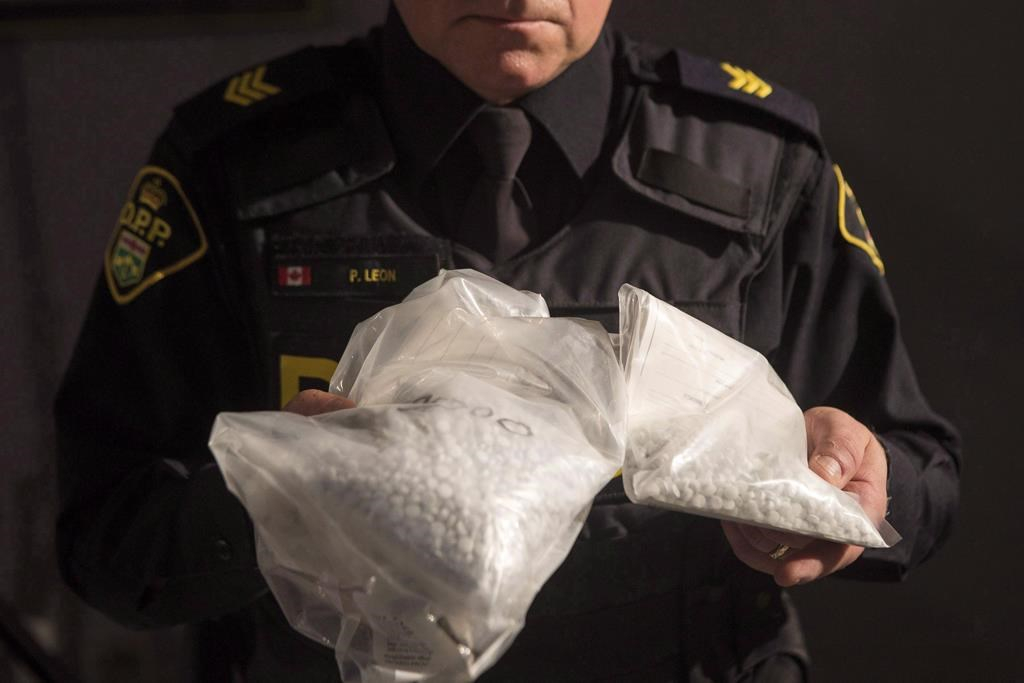 The RCMP has launched at least 20 investigations involving dozens of vendors shipping fentanyl from China as Canada grapples with a record number of illicit opioid deaths, the force's director of serious organized crime says.

"Most intercepts are done here in Canada," Sgt. Yves Goupil said, adding arrests have been made and charges will be laid.

Goupil said their investigation has only uncovered Chinese suppliers of fentanyl for the illicit market.

"It's not just Canada, it's the U.S., and it's all the other countries as well that are putting a lot of pressure on China," Goupil said, adding Mounties have met with Chinese officials twice since November 2016.

"When we were there in April we basically provided them with a lot of intelligence as to all the seizures we had made," Goupil said from Ottawa, adding that about 100 seizures of fentanyl were made up to then by the RCMP and the Canada Border Services Agency.

Chinese officials could no longer ignore their country's role in Canada's growing opioid epidemic, he said.

"We suggested a course of action for China to actually stop and disrupt the influx of shipments of fentanyl. We want to make sure that China assists us once we identify vendors."

Goupil said the Mounties, along with the CBSA and Canada Post, have worked together to identify the best way to flag parcels arriving from China at three international mail-sorting centres — Montreal, Mississauga, Ont., and Vancouver, which gets most of the mail going to destinations across the country.

Fentanyl is prescribed as a painkiller but is also sold illicitly and often pressed into pills. Two milligrams of fentanyl, the equivalent of about four grains of salt, can kill someone who may not even know it's been mixed with drugs including heroin and cocaine.

"We know that for every little package that comes into Canada people can die," Goupil said. "Time is of the essence and we have to fight all the time to tackle the issue."

Fentanyl's strength means it's often mailed in small packages and envelopes, and that has made it challenging to detect, Goupil said.

After the passage of Bill C37 in May, CBSA officers could open mail weighing under 30 grams in order to stop drugs such as fentanyl from entering Canada.

From June 2016 to Sept. 6 this year, the agency made 156 fentanyl seizures across the country, 83 of them in the Pacific region, it said in an email.

"While most fentanyl seizures are made at the Vancouver International Mail Centre in the Pacific region, it is important to note that fentanyl has been seized at Pacific region's air cargo operations and in other modes and regions," the CBSA added.

However, the agency declined to provide further comment in an interview about its role in intercepting fentanyl shipments.

Goupil said Mounties have identified about 70 vendors from China, though at least two domestic sellers with ties to that country are also involved.

"For example, you could have one individual buying a certain amount from China and tableting here and selling the pills here," he said.

Pressure on China over fentanyl shipments, mostly from Canada and the United States, mounted to a point that in March, it banned the manufacture and sale of four variations of the synthetic drug.

"In order for them to keep their status with different organizations ... they need to show the world that they are actually doing the best they can to tackle organized crime and illegal narcotics trafficking," Goupil said.

He said the RCMP is also developing technological expertise in the so-called dark web, a hidden part of the internet, which is used to anonymously sell drugs such as fentanyl.

In the last year, fentanyl has increasingly made its way from China to Europe, Goupil said, adding the Mounties have been asked to provide expertise to Europol, possibly in November at a meeting of the European Union's law enforcement agency.