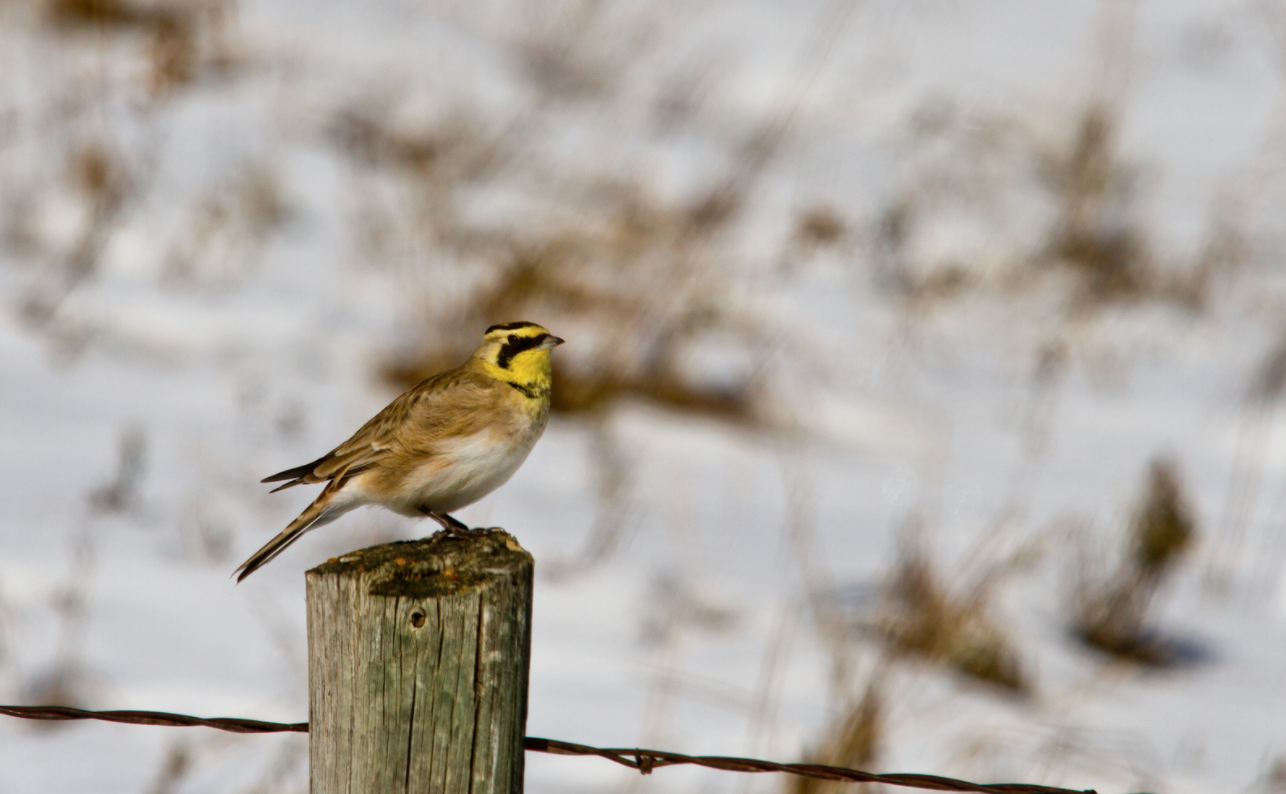 A horned lark perches on a fence post in Waterton, Alta. on Oct. 4, 2012. A group of horned larks was found dead at a Suncor Energy mine on Sun. Sept. 17, 2017. Photo by Shawn McCready on Flickr Creative Commons
Previous story
Next story

Oilsands giant Suncor Energy says it is mystified by the discovery Sunday of dead and dying birds at a nearly complete northern Alberta mine that hasn't produced its first official barrel of oil yet.

On Tuesday, the Alberta Energy Regulator announced it was dispatching an inspector to the nearly completed Fort Hills oilsands mine north of Fort McMurray after Suncor reported finding 123 waterfowl and songbirds near a tailings pond.

"On Sunday... a group of birds were discovered in the north end of our Fort Hills tailings area and had to be euthanized," said Suncor spokeswoman Nicole Fisher in an email.

"The majority of birds impacted were horned larks (a migratory species). The larks are not native to the area so we are engaging with wildlife experts as well as the regulator to determine what additional measures we can put in place."

She said the company has launched an investigation to figure out why the birds were in the area despite the presence of working bird deterrent systems, including cannon, radar and scarecrows.

AER spokesman Ryan Bartlett says the birds were found on or near a tailings pond, a body used to separate oil, sand and chemicals from water used in oilsands ore transportation and processing.

He says the mine, which is operated by Suncor, is continuing to monitor and collect the injured and dead birds and an AER inspector is on route.

The incident recalls previous bird deaths at oilsands tailings ponds. Syncrude Canada was fined $3 million when more than 1,600 ducks were killed in a pond in 2008 but no charges were laid in 2010 when 550 birds had to be destroyed due to an early winter storm that forced them to land on ponds at Syncrude and Suncor.

In August, Syncrude Canada was charged with failing to properly store a hazardous substance in connection with the 2015 deaths of 31 great blue herons at its oilsands mine, an incident not related to its tailings ponds.

"This is a macabre version of Groundhog Day, where the government and industry keep promising that they'll do better while the birds keep dying in toxic lakes," said Greenpeace Canada energy strategist Keith Stewart.

"We'll hear lots of excuses over the next few days, but the reality is that it is going to keep happening until the federal government actually enforces the laws designed to protect wildlife from toxic substances."

"Regulations that increased oversight of tailings ponds were put in place in 2008 and improved in 2013 that included stronger wild life deterrent requirements," he said in an email.

The $17-billion Fort Hills oilsands project is expected to begin production later this year and ramp up to capacity of 194,000 barrels per day of bitumen within 12 months. Its reserves are expected to allow it to operate for 50 years.

It is owned 50.8 per cent by Suncor, 29.2 per cent by French oil company Total and 20 per cent by Vancouver mining firm Teck Resources

By The Canadian Press | News, Politics | July 9th 2017
State Of The Animal