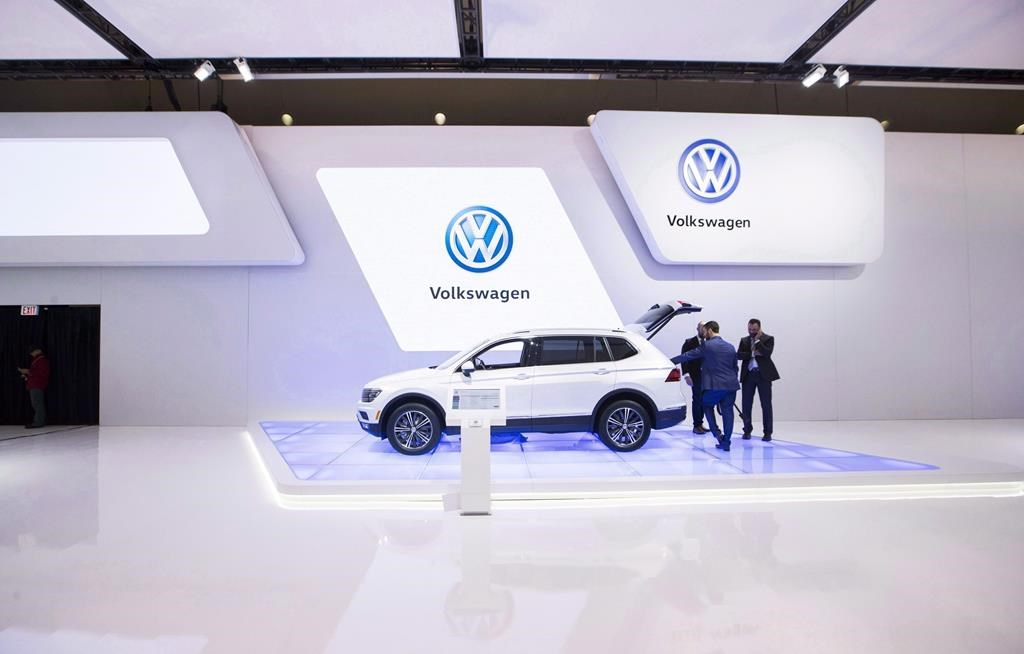 People look at the 2017 Volkswagen Tiguan during the Canadian International Auto Show in Toronto, on Thursday, February 16, 2017. File photo by The Canadian Press/Mark Blinch
Previous story

The federal government should be moving ahead with action against Volkswagen in the wake of news that Ontario has charged the company and carried out a raid on its headquarters, according to an environmental organization.

On Tuesday, provincial authorities executed a search warrant at Volkswagen Canada offices in the Toronto area as part of its investigation into the emissions scandal that rocked the company two years ago.

The Ministry of the Environment and Climate Change said Wednesday it had charged Volkswagen AG with one count under the province's Environmental Protection Act last week, alleging the German company did not comply with Ontario emission standards. The allegations have not been proven in court.

"It's good news, finally. Now if we could just get Environment Canada to act on behalf of the country, that would be a great thing," said Tim Gray, executive director of Environmental Defence.

He said the federal government has broader powers than the province and can impose higher fines on offenders that could be used to protect against pollution and accelerate the transition to electric vehicles.

His organization and the Canadian Association of Physicians for the Environment filed suit over the summer to try to force Environment Minister Catherine McKenna to move forward on enforcing Canadian pollution laws allegedly broken by Volkswagen. A statement from McKenna at the time said her department is investigating and will act if necessary.

Environment and Climate Change Canada said Wednesday that the federal government and the government of Ontario are investigating Volkswagen under different laws and for different potential crimes.

"Consequently the evidence needed and the burden of proof will be different and each case will take its own timeframe to resolve," said spokeswoman Amelie Desmarais.

"ECCC's investigation is proceeding in a comprehensive and methodical manner. This is a complex case involving both domestic and foreign organizations, and a number of alleged offences under CEPA.... It is not uncommon for cases of this magnitude and complexity to take this long through the investigation phase."

The Ontario government said the search warrant was part of its continuing investigation.

"Yesterday, MOECC executed a search warrant at the company's Ajax facility. Under the charge, Volkswagen is alleged to have caused or permitted the operation of vehicles that did not comply with emission standards prescribed by Ontario regulations," said Environment Minister Chris Ballard in a statement.

"If the allegations are proven in court, penalties for the offence will be determined following a sentencing hearing."

He added Volkswagen owners, dealers, service managers and technicians are not the focus of the investigation.

A spokeswoman for the Ontario Ministry of Finance said it provided forensic data recovery assistance to support MOECC investigators during the execution of the search warrant.

The company, meanwhile, said in a brief statement it is co-operating with the Ontario government and it would not be "appropriate" to comment further.

Earlier this year, Quebec and Ontario courts approved a settlement agreement with members of a Canadian class-action lawsuit who bought or leased certain Volkswagen or Audi vehicles with diesel engines caught up in the emissions cheating scandal.

It has been more than a year since Volkswagen agreed to pay more than $20 billion to settle criminal charges and civil claims related to the company's sale of nearly 600,000 cars with "defeat devices'' designed to beat U.S. emissions tests.

Volkswagen pleaded guilty in the U.S. after software was found in certain diesel vehicles that made it appear as though the cars were producing fewer emissions than they really were.

In fact, under normal conditions, the cars emitted 35 times Canada's legal limit on nitrogen oxides, which have adverse effects on human health and contribute to climate change.

About 105,000 of the rigged vehicles were sold in Canada and Volkswagen has a court-certified settlement program underway to buy back the cars and compensate Canadians who owned or leased them.

Tony Faria, an auto industry analyst at the University of Windsor, said it's not surprising that Ontario is laying charges two years after the scandal erupted.

"Officials everywhere, not just in Canada but in the U.S., Germany, many other countries where many Volkswagen vehicles had been sold, they're all still looking into it and at this stage Volkswagen still isn't finished by a long shot with all of the court cases they have to face," he said.

He said the scandal has affected the entire market, noting Germany and France have announced plans to phase out diesel engines over the next 20 years.

Ottawa not doing its job to hold Volkswagen to account for diesel dupe: lawyers