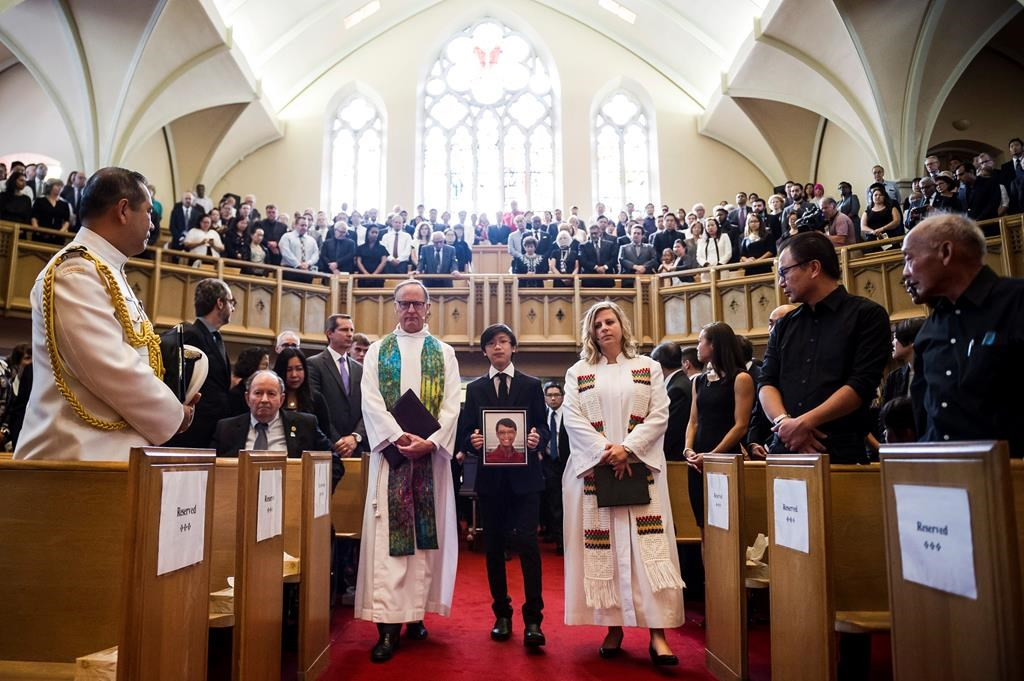 Attendees stand during a funeral service for Arnold Chan, former MP for Scarborough-Agincourt, in Toronto on Saturday, September 23, 2017. Photo by The Canadian Press/Christopher Katsarov
Previous story
Next story

Prime Minister Justin Trudeau was one of the scores of people paying tribute at the funeral for Liberal MP Arnold Chan on Saturday morning in Toronto.

Chan, the member of parliament for Scarborough-Agincourt, died of cancer earlier this month at age 50.

Trudeau was one of several speakers at the ceremony, along with Chan's wife Jean Yip and their three sons as well as childhood friends.

Chan was remembered as principled and optimistic, a devoted family man and a talented musician, and an MP completely engrossed with the political process.

In an emotional tribute, Trudeau described Chan as man with deep conviction, calling him "one of the most honourable members of that House of Commons."

He said the last time he saw Chan, they sang Elton John's "Your Song" together, with Chan on piano.

"You all know that I don't sing often, and there's a reason for that," Trudeau said. "But Arnold had me belting out the words while he played beautifully.

"Arnold, your song will forever be ours."

"I look around this room, I look back at the days that followed the tragic news of our friend's passing, and I see Arnold's lasting legacy," he said. "A legacy that goes far beyond the bills he authored or the votes he won. Far beyond the victories he celebrated and the losses he bore."

Chan grew up in Toronto. He earned masters degrees in political science and urban planning, and also has a law degree. He was named the Liberal Party's deputy House leader after they took power in the 2015 federal election.

In June he gave an impassioned speech to his fellow MPs, urging them to reject acrimonious debate and what he called "canned talking points" in favour of civility. At the time, Public Safety Minister Ralph Goodale called the speech "truly extraordinary.''

Chan was diagnosed with nasopharyngeal carcinoma shortly after he won the Scarborough-Agincourt seat in a 2014 byelection. He began a difficult treatment regime of radiation and chemotherapy, but revealed in March 2016 the cancer had returned.

His funeral was jointly officiated by Toronto MP Rob Oliphant, an ordained minister, as well as Rev. Sarah Chapman. Other politicians in attendance were Toronto Mayor John Tory and Ontario Premier Kathleen Wynne.