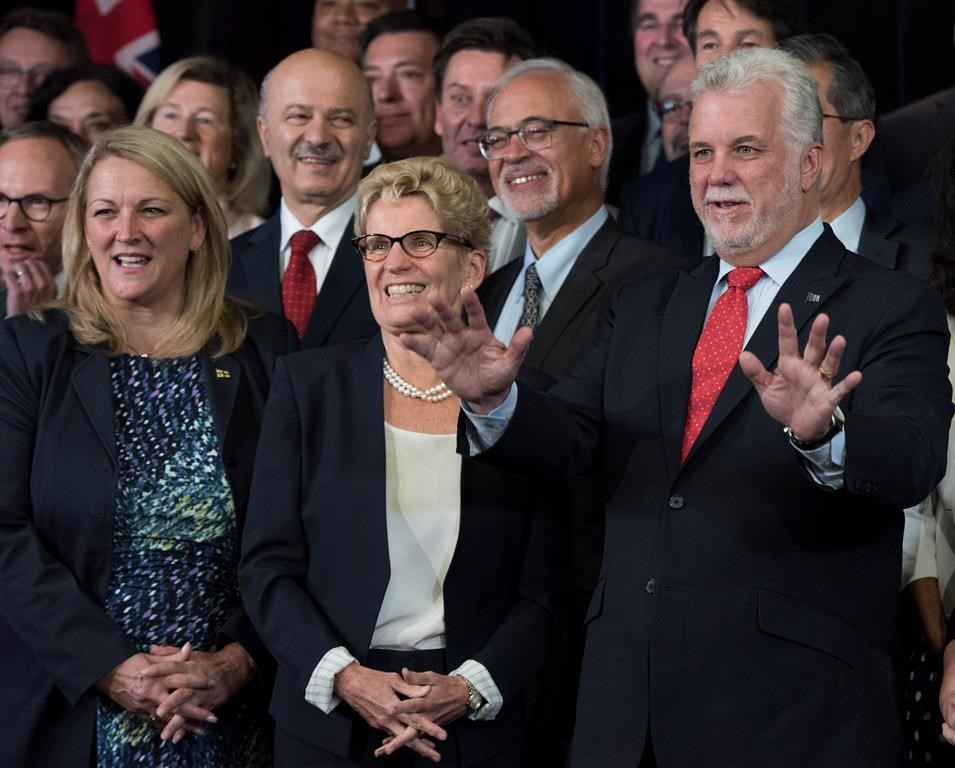 Philippe Couillard gestures toward the official photographer as Kathleen Wynne and Lise Theriault during a joint cabinet meeting between Quebec and Ontario, in Quebec City on Friday, September 22, 2017. Photo by The Canadian Press/Jacques Boissinot
Previous story
Next story

Ontario Premier Kathleen Wynne contradicted the leader of one of Quebec's opposition parties Friday, saying he misunderstood their private conversation and shouldn't have publicly revealed its contents on the internet.

On Thursday, the leader of the Coalition for Quebec's Future (CAQ) published a tweet congratulating himself for having interested Wynne in his party's energy strategy.

"The premier of Ontario is open to the CAQ's plan to build new dams to export more electricity to Ontario," Francois Legault wrote on his Twitter account.

The following day, Wynne insisted she had never endorsed the party's plan and had raised questions about potential environmental issues during her conversation with Legault.

"It is simply not the case that I made any commitment to a plan or that I said I was open to a plan," she said at a news conference in Quebec City alongside Quebec Premier Philippe Couillard.

"I said I was open to a conversation, as I always am."

Wynne had made similar comments earlier in the day, noting "it wasn't a good idea to say something like that in public."

Couillard described Legault's actions as "worrisome" and noted he appeared to have forgotten Ontario currently has an electricity surplus.

Legault stuck to his version of events in a news release where he claimed Wynne had indeed been open to his proposal and had expressed willingness to hold further talks on the matter.

"We understand that Mr. Couillard is disappointed, since his desire to end the construction of dams in Quebec is incompatible with the (CAQ's) plan to export electricity to Ontario," the statement read.

Wynne wrapped up a multi-day trip to Quebec where she met with party leaders and became the first premier from outside the province to deliver a speech inside the legislature.

Senior ministers from Ontario and Quebec held a joint cabinet meeting Friday in Quebec City where they discussed issues such as climate change and trade.

Also at issue during the visit was the debate over whether Quebec would harmonize its rules with Ontario regarding cannabis legalization.

The Ontario government announced earlier this month its plan to open 150 dedicated marijuana stores run by the province's liquor control board, but Quebec hasn't yet announced what it will do.

Couillard said Quebec's rules wouldn't necessarily be identical to Ontario's but there would be "many points in common."

"How could it be otherwise, seeing as we're neighbours?" he said.

Earlier Friday, Couillard and Wynne also announced they had signed an agreement with the governor of California to create the world's second largest carbon market.