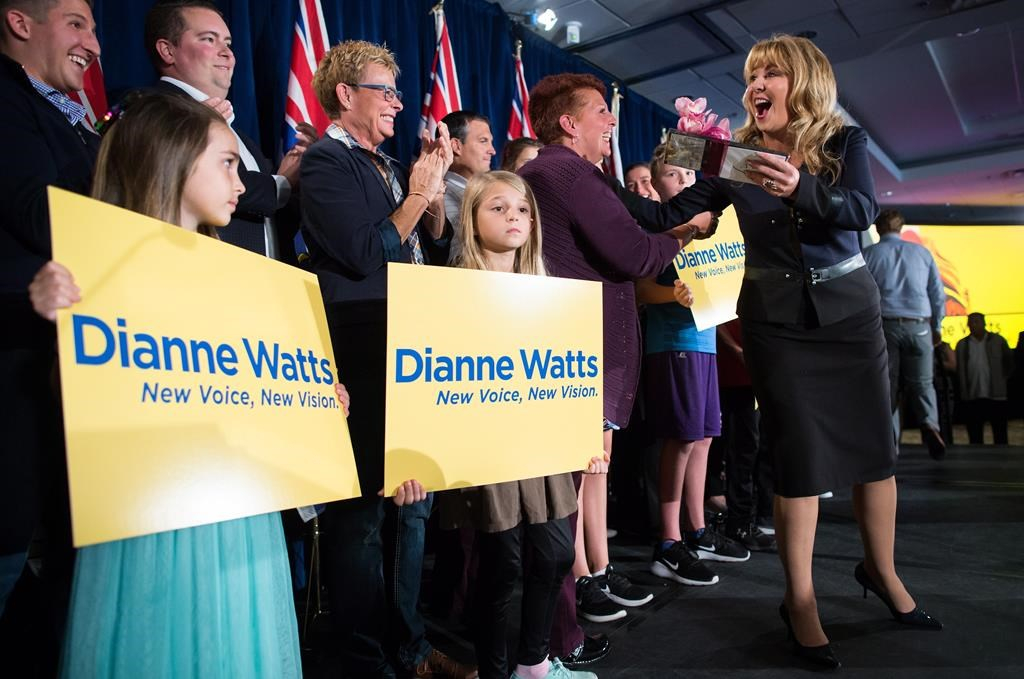 Conservative MP Dianne Watts, right, greets supporters as she walks on stage to announce she will seek the leadership of the B.C. Liberal Party, in Surrey, B.C., on Sunday, September 24, 2017. Photo by The Canadian Press/Darryl Dyck
Previous story

An MP for Surrey, B.C., says she will step down from her federal post and dedicate her full efforts to becoming the next leader of the B.C. Liberals.

Dianne Watts made the announcement at a hotel in the Vancouver suburb on Sunday, becoming the second person to officially enter the race after B.C. MLA Sam Sullivan declared his candidacy last week.

The Liberals have a strong history to build on, but the provincial election last spring showed there's a need to reconnect with voters, Watts said.

"We need to build on our electoral success in the rural and resource communities across this province. And we need to reach out and really listen to the urban voters right here in the Lower Mainland," said Watts, who served as mayor of Surrey from 2005 to 2014.

No political party emerged from the May election a clear winner, but the New Democrats and Greens reached an agreement that allowed for a minority NDP government and the Liberals were ousted from power after 16 years in office.

In a wide-ranging speech on Sunday, Watts said the party now has an opportunity to build a new future together.

Questioned after the announcement about why she stayed quiet during the provincial election last spring, Watts said she was busy doing the job taxpayers expect of her.

"I think they would be terribly offended if I left the House of Commons in Ottawa and came out to work on an election," said the Conservative MP for South Surrey-White Rock. "And surely, I can't imagine that my presence there would have done any difference in the outcome."

Watts said she's currently in discussions about when she will resign her seat, which she won in the 2015 election.

"I don't think it's fair that I have one foot in Ottawa and one foot here. I'm committed and I'm all in," she said, adding that leaving the House of Commons is not a decision to be taken lightly.

Watts said she was inspired to run for the B.C. Liberal leadership by the province's current minority NDP government, which she called "unstable" and bad for the economy.

"That's something that I cannot idly stand by," she said.

Watts said she intends to run for a seat in the provincial legislature, but the timing and location will depend on when a seat opens up. She noted that the Liberals have already picked a candidate for an upcoming byelection in former premier Christy Clark's Kelowna West riding.

Both the riding and the Liberal leadership opened up last month after Clark quit politics following her government's defeat.

Sullivan became the first person in the leadership contest when he announced his candidacy Thursday, but it's expected that several other prominent provincial politicians will join the race.

"I'm looking forward to engaging with you very soon to talk about how we can work together to build a fresh vision for British Columbia and a stronger, more united B.C. Liberal party," he said in the video.

This could be a test of

This could be a test of whether BC's right-wing voters (yes, the voters) have any credibility left. If so, those voters will reject Watts for her decision and try to push for another candidate/party, pretty much like people are doing in Alberta.

With the BC Liberal flip-flops post-election despite their track record, plus an internal critique by Darryl Plecas of Abbotsford (who would later be expelled), it's even clearer that the BC Liberals are the same as Trudeau, not the Conservative Party. Watts just doesn't fit. She can't reshape the party either.

Good heavens Adam, I'm not sure Trudeau would want to be compared to the B.C. Liberals just now. Read the article above this one, on CAPP's influence on B.C. policy making. Perhaps its true that the Federal Liberals are as indebted to donations from Big Oil companies as was the government of Christy Clark..but I doubt he wants Canadians making that connection. A more pleasant conclusion for Trudeau might be that this bid by a federal conservative proves the B.C. Liberals had gone astray...............into neo-con territory...

And betrayed the 'sunny ways' of real Liberals.

Now I wouldn't buy that. But the right wing voters of B.C. might..and find a conservative coming to their rescue palatable. Who knows?

And there we have it. A

And there we have it. A federal Conservative sees an opening in the dwiddle dee dee and dwiddle dee dumb game of Conservative\Liberal politics and is bravely stepping into the breach, to defend Neo-liberal big money fat cats everywhere.

Thank goodness. We wouldn't want participatory democracy to get away on us!