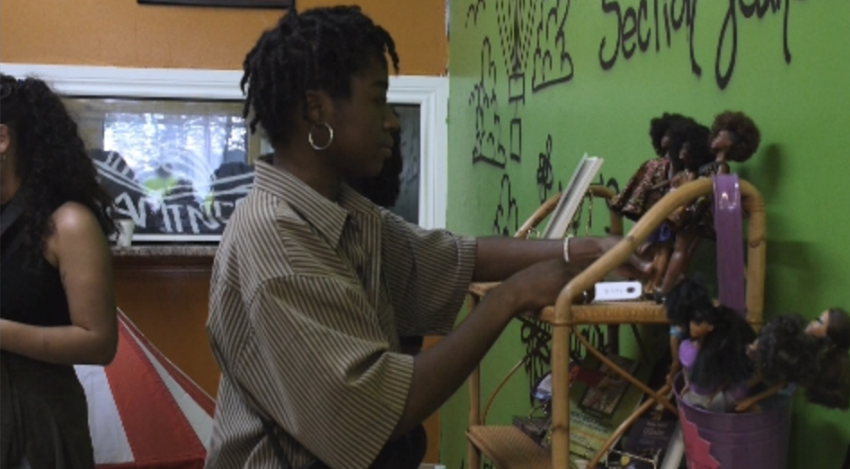 A visitor to Librairie Racines admires the black dolls on display for children during the bookstores grand opening on Aug. 4, 2017. Photo by Clothilde Goujard
Previous story

The UN Human Rights Council is set to discuss a report on issues affecting African-Canadians that makes recommendations to the federal government, including that it apologize for slavery and consider providing reparations for historical injustices.

A UN working group will submit its final report on the human rights situation of people of African descent in Canada to the council Monday based on its consultations with government officials and interest groups during an October 2016 mission to Ottawa, Toronto, Halifax and Montreal.

Some report findings released in August raised deep concerns about Canada's legacy of anti-black racism, which traces its origins to slavery in the 16th century and reverberates into the present day.

"History informs anti-black racism and racial stereotypes that are so deeply entrenched in institutions, policies and practices, that its institutional and systemic forms are either functionally normalized or rendered invisible, especially to the dominant group," the UN officials wrote.

"This contemporary form of racism replicates the historical ... conditions and effects of spatial segregation, economic disadvantage and social exclusion."

Slavery was abolished in the British colonies in the 1830s.

The working group laid out dozens of recommendations to redress past and present wrongs affecting African-Canadians, the first among which calls on the Canadian government to apologize for slavery and consider issuing reparations.

"It is important to underline that the experience of African Canadians is unique because of the particular history of anti-black racism in Canada," the report said. "(The government of Canada should) take concrete steps to preserve the history of enslavement and the political, social and economic contributions of African Canadians by establishing monuments in their honour."

The report draws a through-line between Canada's history of racial segregation to the structural racism that "lies at the core" of many Canadian institutions today, manifesting itself in the form of poverty, health problems, low educational attainment, higher rates of unemployment and overrepresentation if African-Canadians in the criminal justice system.

This history is particularly poignant in Nova Scotia, where over the course of generations, African-Nova Scotian have demonstrated "resistance and resilience" to develop a distinct culture, the report said.

In Halifax, the community of Africville thrived despite "the harshest opposition," the report said, and most of its residents were landowners.

The city offered a formal apology in 2010 and allocated $3 million to build a museum on the site, which members of the working group welcomed as a recognition of its significance to the African-Nova Scotian community.

Socioeconomic conditions in African-Nova Scotian communities remain "deplorable," they said, and the provincial government is falling short in its efforts to establish land titles for the descendants of the black loyalists.

The authors appealed to the federal government to provide financial support to help claimants cover the costs involved in resolving land disputes, centuries after their ancestors were denied title to the rocky plots where they settled.

The report also suggested that Ottawa work with provincial and municipal authorities to develop legislation regarding what it called "environmental racism" — the risks created by environmental hazards like landfills, waste dumps and pollutants that are disproportionately situated near black communities.

The Nova Scotia Human Rights Commission is expect to address the UN report on Monday.

At the national level, the working group said the Canadian government should develop a strategy to address anti-black racism in the criminal justice system.

Between 2005 and 2015, the number of black inmates in federal prisons rose by more than 71 per cent, the report said.

The authors were troubled by statistics suggesting that black people are "extraordinarily overrepresented" when it comes police use of lethal force, and noted that the lack of race-based data about these incidents makes its difficult to assess the scope of the problem.

Racial profiling is "endemic" in strategies used by Canadian law enforcement, the working group said, and called for practices they said disproportionately affect black Canadians — such as street checks and solitary confinement — to be abolished.

The report recommended the creation of a federal department of African-Canadian affairs and create special measures to compensate for the impacts of discrimination, such as targeted hiring policies similar to those for Indigenous Peoples.

It said existing federal anti-discrimination legislation relies on terms such as "visible minority" that obscure the degrees of disparity faced by different ethnic groups and fails to fully account for the specific human rights concerns of African-Canadians.

The working group encouraged federal lawmakers to legally recognize African-Canadians as a distinct group "who have made and continue to make profound economic, political, social, cultural and spiritual contributions to Canadian society."