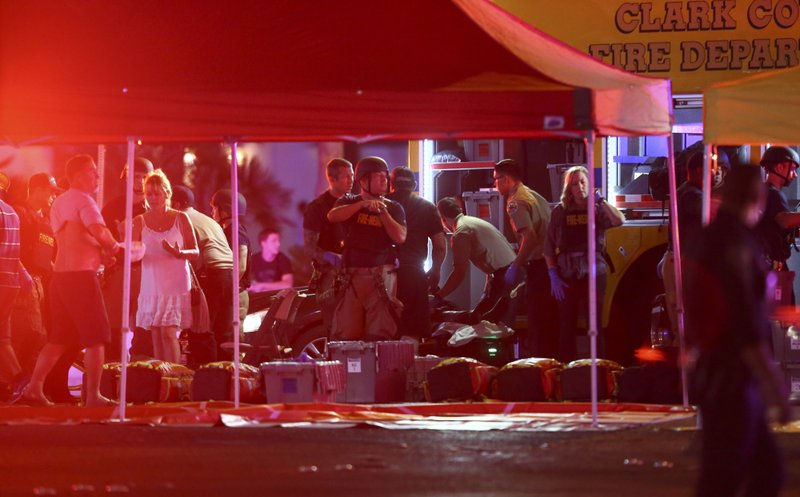 Medics treat the wounded as Las Vegas police respond during an active shooter situation on the Las Vegas Strip in Las Vegas Sunday, Oct. 1, 2017. Photo by The Associated Press
Previous story
Next story

Two Canadians, a mother of four and a man just days away from his 24th birthday, were among dozens of people killed in Las Vegas when a gunman opened fire from a 32nd- floor hotel room on a large crowd gathered across the road at an outdoor country music festival Sunday night.

Jessica Klymchuk, of Valleyview, Alta., and Jordan McIldoon, 23, of Maple Ridge, B.C., were among the 58 people who died in the horrific attack that also left more than 500 others injured, including an unknown number of Canadians.

"The scope of this tragedy is worldwide and we are feeling its impact here at home," the division's superintendent, Betty Turpin, said in a statement.

A post on Klymchuk's Facebook page says she got engaged in April, and was in Vegas with her fiance.

In British Columbia, a family member confirmed McIldoon was among the dead.

"It's a terrible thing," said the relative, who asked his name not be used. "I don't handle it very well."

McIldoon would have turned 24 on Friday and was a month shy of completing a course to qualify as a heavy-duty mechanic. His parents travelled to Nevada on Monday to retrieve his body, the relative said.

In a Facebook posting that could not immediately be verified, Heather Gooze of Las Vegas said she was outside the festival grounds when the Canadian passed away.

"I am with a young man who died in my arms! RIP Jordan McIldoon from British Columbia," Gooze wrote. "I can't believe this just happened!!!"

Those who were at the outdoor festival when the shooting occurred said it was only when the performer on stage dropped his microphone and ran that the true horror of what was unfolding dawned on the crowd. Their first thoughts as the sound of automatic gunfire resounded through the area turned to fireworks, many said.

"We heard the shots get fired, we saw the smoke," Ashley Fowler, who was with friends, told the K-Rock radio station in St. John's, N.L. "Everyone thought it was fireworks at the show until Jason Aldean dropped his mic and ran from the stage, so everyone started to run."

As the panic- and fear-stricken crowd of more than 22,000 at the Route 91 Harvest Festival scrambled for their lives, some found themselves running into a wall of people, or a fence with barbed wire around the airport. A local man with a truck attached a rope to the fence and pulled it down, Fowler said.

"They literally have to divert any planes landing in Las Vegas to Arizona because we're all standing on the runway running from the shooters," said Fowler, who got separated from her friends in the panic. "I'm in so much shock."

Police identified the man who opened fire from the 32nd floor of the Mandalay Bay hotel as Stephen Paddock, 64, of Mesquite, Nev., less than two hours from Las Vegas. SWAT teams using explosives stormed his hotel room and found he had killed himself, authorities said. He had as many as 10 guns with him, including rifles, they said.

Jody Ansell, of Stonewall, Man., was among the injured. She said in a Facebook message from her hospital bed that she was recovering.

"I was shot in the right arm and the medical staff are taking care of me," Ansell said.

Mikey McBryan, of Hay River, N.W.T., and his girlfriend were just leaving the casino at Mandalay Bay when officers with guns drawn began yelling at them to get out because of shooters in the building. McBryan said they ran across the road to behind a large electrical transformer outside a gas station.

"It now seems like a foolish idea but we didn't know what was going on," McBryan said in an interview. "Everyone was kind of in a daze."

McBryan said he didn't hear any gunfire, but remembers waves of screaming as hundreds of people from the concert began descending on the area and police set up roadblocks.

In a statement, Prime Minister Justin Trudeau said the government denounced the "senseless and cowardly act of violence.

"Our hearts break for our American friends and neighbours today," Trudeau said.

Police have warned that identifying bodies from the worst mass shooting in modern U.S. history will be a "long, laborious process."

Global Affairs Canada said it was aware of the two Canadian fatalities and had sent a team of consular officials to Las Vegas to help those in need.

Other Canadians at the concert or the hotel included Victoria's chief of police Del Manak and his family, and the leader of the Opposition Yukon party, Stacey Hassard. They were not hurt.

Las Vegas is a popular tourist destination for Canadians. Visitors from Canada made up nearly half of international tourists who arrived in the city by air last year, according to the Las Vegas Visitor Authority.

— with files from Elizabeth Leighton and Geordon Omand in Vancouver, Lauren Krugel in Calgary and the Associated Press.

Updated at 5:48 PM EDT with latest information on victims.