Feds 'never did the work' to understand Indigenous concerns on pipeline: lawyer 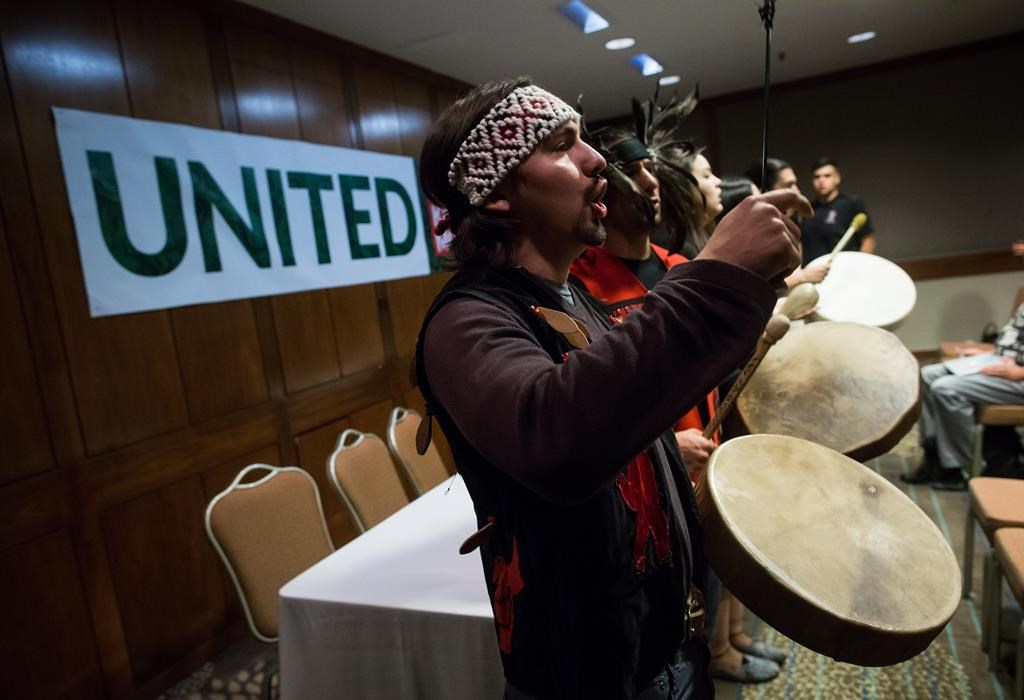 Swo Wo Gabriel of the Squamish First Nation sings and drums before First Nations and environmental groups speak about a federal court hearing on the Kinder Morgan Trans Mountain pipeline expansion, on Oct. 2, 2017. Photo by The Canadian Press
Previous story
Next story

Canada's decision to approve an expansion for the Trans Mountain pipeline was a "one-way street" that ignored the economic and title rights of Indigenous people, a lawyer said Monday in the Federal Court of Appeal.

Indigenous groups were required to go to tremendous lengths to ensure all the necessary information about their rights was before the National Energy Board (NEB) process, Sigurdson said.

"Yet in return, despite their assurances of genuine engagement on Indigenous rights concerns on the post-NEB phase of the review, Canada never performed the work that would assist them to understand the rights at issue or the impact on (First Nations), nor did the Crown provide responsive feedback," said Sigurdson, who represents the Upper Nicola Band.

Trans Mountain, a subsidiary of Kinder Morgan Canada, aims to double an existing Edmonton-to-Burnaby, B.C. pipeline with an additional 987 kilometres of pipeline in new and existing corridors, as well as build a pump station, new docks and a storage facility.

The project that would triple the pipeline's capacity and increase tanker traffic seven fold risks the marine environment and threatens human health, Sigurdson.

Given those risks, the Canadian government's approval of the project should have been subject to strenuous and careful scrutiny, she said.

"Canada never had the discussions nor did the work necessary to comprehend substantive concerns that remain outstanding."

Scott Smith, a lawyer for the Tsleil-Waututh Nation, said Monday that because the NEB didn't assess the effects of marine shipping from the project, his client's rights were violated and the lives of endangered southern resident killer whales would be jeopardized.

He said an additional 348 tankers would annually ply Burrard Inlet, the heart of the nation's territory, on their way to deliver diluted bitumen to markets with the catastrophic risk of spills that "Canada inexplicably refused to even consider."

The Tsleil-Waututh, or "People of the Inlet," are dependent on the area for sustenance, spirituality, economy and transportation, he said.

Smith said the NEB's error in ignoring marine shipping was in turn repeated by the government, which failed to comply with legal requirements under environmental laws.

He said the Tsleil-Waututh came to the table prepared to discuss and consider compromise as was required under the engagement process but was stymied on issues it raised repeatedly.

"It encountered officials from Canada who were not decision makers and whose mandates were limited to listening and recording concerns and telling Tsleil-Waututh they would need to 'agree to disagree' on the core issues it raised. That is not the face of compromise."

Earlier Monday, Chief Ian Campbell of the Squamish First Nation said that the federal government failed to fully consult or gain consent of First Nations for expansion of the pipeline, so they have had little choice but to turn to the courts in an effort to protect their land and water.

Campbell told a news conference the government didn't adequately study the impacts that a spill of diluted bitumen could have in the band's waters, which isn't good governance.

Both the British Columbia and Alberta governments are interveners in the court action, on opposing sides of the argument. B.C. Premier John Horgan said during the election campaign this spring that "every tool in the toolbox" would be used to stop the expansion.

Alberta Premier Rachel Notley announced in May that her province had been granted intervener status, saying the pipeline network is safe and her government would continue to stand up for Alberta to get shovels in the ground.

Kinder Morgan has made progress on the pipeline expansion and said last month it had selected or reached agreements with six firms experienced in building pipelines and major infrastructure.

The hearing is expected to last about two weeks.