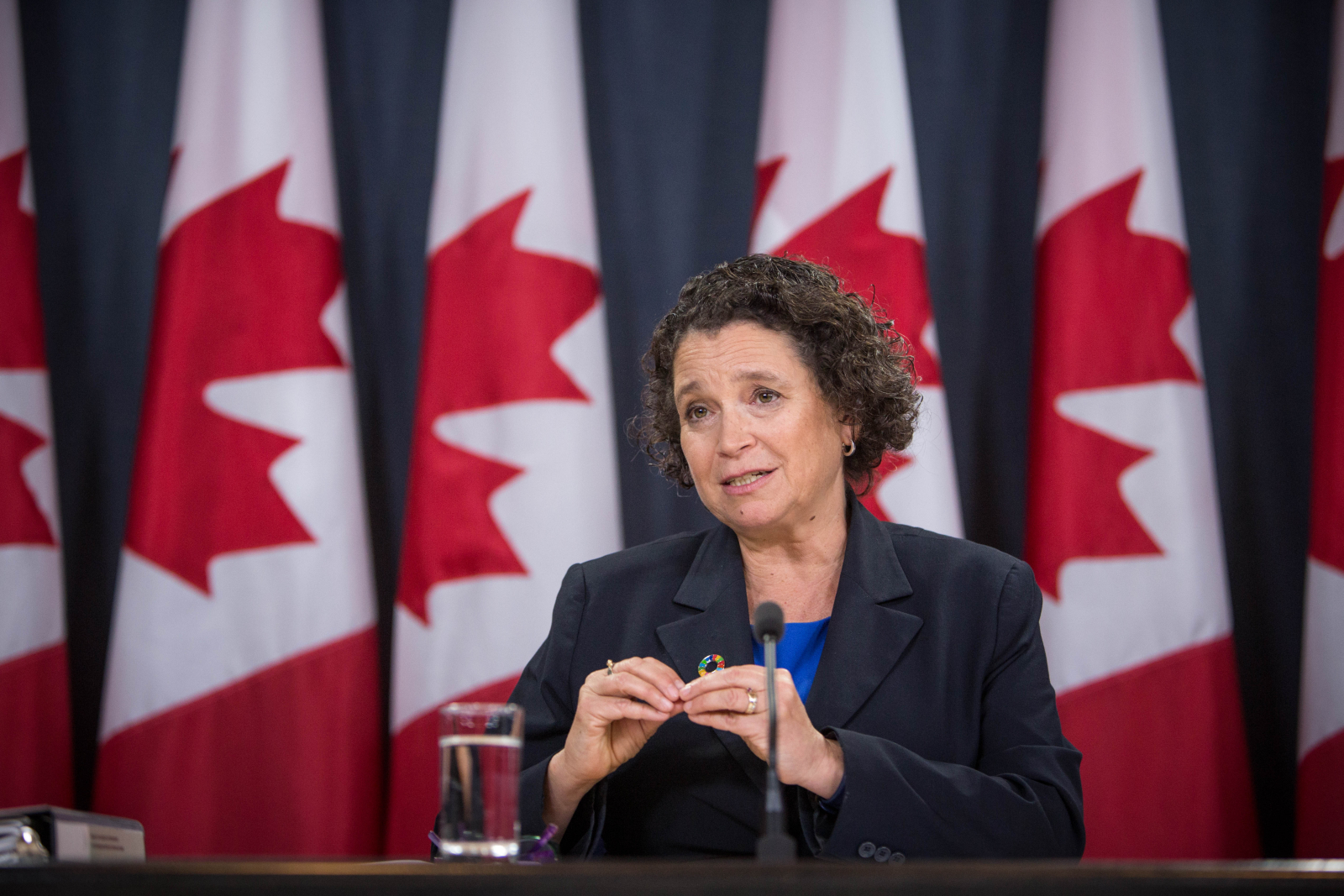 Julie Gelfand, federal Commissioner of the Environment and Sustainable Development, speaks to reporters in Ottawa's National Press Theatre about her fall 2017 report to Parliament. Photo by Alex Tétreault
Previous story

Auditors general across the country are conducting nationwide climate change audits of all federal, provincial and territorial governments.

The probes will be the first of their kind to provide a comprehensive and independent assessment of how much progress the different governments are making on reducing climate-warming greenhouse gas emissions and adapting to Canada's changing climate.

Julie Gelfand, federal Commissioner of the Environment and Sustainable Development, explained at a news conference on Tuesday that all of the auditors had agreed to work together to develop individual audits as well as a summary report of the entire country's performance.

Gelfand's office released this news as she tabled her fall report to Parliament that focused on Canada's climate change actions and performance as well as on the government's progress in ensuring that it was making sustainable decisions. Gelfand's latest report would be expected to contribute to the other work underway by her provincial counterparts.

"So these audits are in progress right now, five have already been tabled," said Gelfand, whose office is located inside the federal auditor general's office. "Once all of them have been tabled we will do a summary report.”

Some details of the coordination are still being finalized, said staff from the federal office during a technical briefing for media. But all of them have agreed to bring the audits together, Gelfand explained in her report.

Her assessment also noted that successive federal governments had made a series of pledges to tackle climate change since 1992, but always failed to meet their goals and targets.

"Recognizing the unique role they play in promoting accountability in almost all areas of government activity, most of Canada’s provincial auditors general partnered together and with the Office of the Auditor General of Canada in a nationwide climate change audit initiative," Gelfand said in a message that was included in her report. "Each participating audit office agreed to contribute audit work that assessed its government’s efforts to reduce greenhouse gases and adapt to the impacts of climate change."

While each province would be audited by their own auditor general, Gelfand's office is also responsible for assessing performance of Canada's territorial legislatures.

"By working together, participating auditors general across Canadian jurisdictions intend to deliver an assessment of climate action in Canada, identifying common issues and opportunities to improve collaboration," said the report.

Time to shift from planning to action

The federal audit also noted that this series of audits would also help provide a complete picture of progress in meeting the objective's of a national climate change agreement reached last December by Prime Minister Justin Trudeau with the premiers.

Gelfand also said that it was now up to politicians to take the evidence and use it to hold the government accountable for its promises and actions.

"Parliamentarians are in a position to help the government take that critical next step that will move it from a seemingly endless planning mode into an action mode," said Gelfand's report. "That shift needs to happen, and it needs to happen now, because Canada is already experiencing the impacts of a changing climate."

Although two provinces, Manitoba and Saskatchewan, declined to sign on to Trudeau's plan, Gelfand said that auditors in those provinces would still be auditing to review progress in reducing greenhouse gas emissions as well as plans to achieve further reductions and prepare for climate change impacts.

B.C.'s auditor general has also confirmed that its ongoing audit of the western province's climate change plan would contribute to the collaborative audit of all the governments.