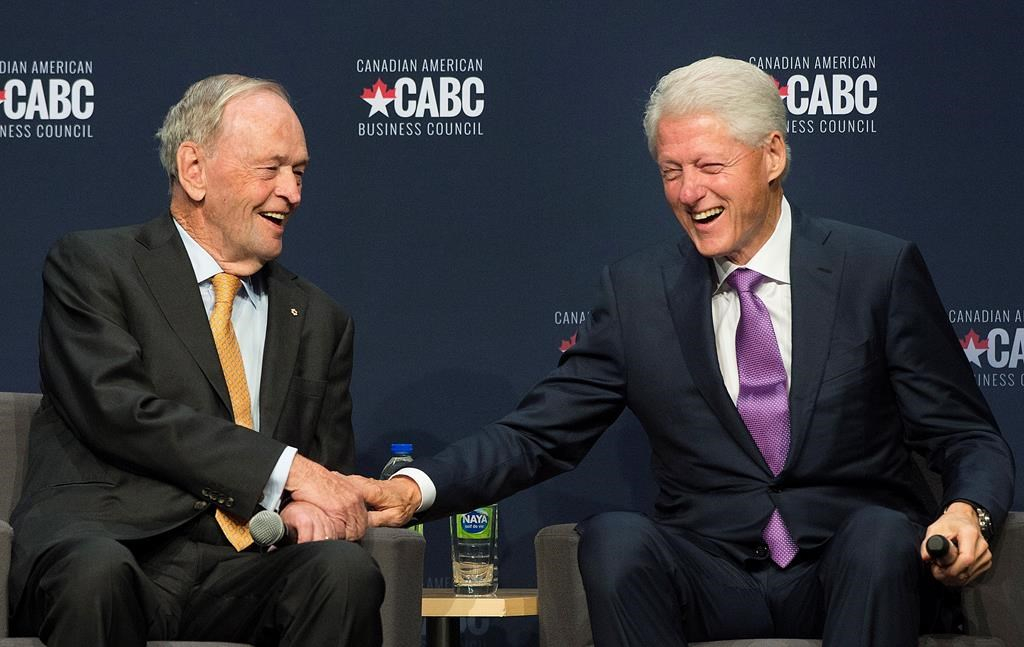 Former U.S. president Bill Clinton, right, and former Canadian prime minister Jean Chrétien laugh during a discussion on their time in office during an event to mark Canada's 150th anniversary in Montreal, on Oct. 4, 2017. Photo by The Canadian Press
Previous story
Next story

"It just doesn't work like that. (The U.S. and Canada) are linked in so many areas. You just can't redo everything we did."

If the Americans "act foolishly" with regards to NAFTA, then "we will pay, but they will pay dearly too," Chrétien said.

Earlier, it was a love-in as Clinton and Chrétien discussed trade and Canada-U.S. politics, but the two former leaders also spent a while on mutual admiration.

Chrétien affectionately called Clinton "the kid," while the former president said he found the Canadian leader fascinating because he was the 18th of 19 children growing up in the small town of Shawinigan, Que.

"I said: 'this guy must be something — he was the 18th kid and ends up being prime minister,'" Clinton said, remembering what he read about Chrétien shortly after the Canadian election.

"He had to have a lot of persistence otherwise he wouldn't have been fed!" Clinton mused.

Chrétien and Clinton, who were invited to Montreal's convention centre by the Canadian American Business Council to talk about the Canada-U.S. relationship, harkened back to a time when relations between the two nations were significantly less acrimonious.

Trump's administration is openly hostile to trade, and reports suggest the current renegotiation of NAFTA is proving to be difficult.

Chrétien said "the rich have too much in relation to what the poor have gained" in the after more than two decades since the NAFTA deal was signed.

More needs to be done to "redistribute wealth," he said.

Clinton blamed the Republicans for the decision not to invest in parts of the U.S. that were going to be hit hard economically by the trade deal.

"I think we did the right thing (regarding NAFTA)," Clinton said. "It's just that in the last election so many people felt left behind and NAFTA was a convenient target."

Canadian federalism was also a major topic of discussion.

Clinton was asked to discuss his momentous speech in 1999 during the Forum of Federations Conference in Mont-Tremblant, Que., roughly four years after Quebec's referendum on sovereignty.

"You said it would be a tragedy for a country like Canada to be broken," Chrétien told the crowd about Clinton's 1999 speech.

"Some in Quebec were not too happy with that statement but I was happy and I thought it was very useful," Chrétien added.

Clinton said at the time he was trying to end conflicts in the Middle East and Northern Ireland, and stop the killing in Bosnia.

"I was fascinated by the Canadian issue," Clinton said. "People are looking at (Quebec and Canada) like you're the grown-ups in the household. Because you found a way to get the best of both worlds and to treasure your differences."

The sovereignty issue provided a segue for Clinton to discuss the stress on nation-states around the world regarding immigration, which he said is leading to toxic identity politics.

What's important, Clinton said, is for people to keep what is special about their identity without denying the fundamental humanity of others.

"We have to conquer zero-sum tribalism," he said. "Diverse groups make better decisions."

— With files from Stephanie Marin