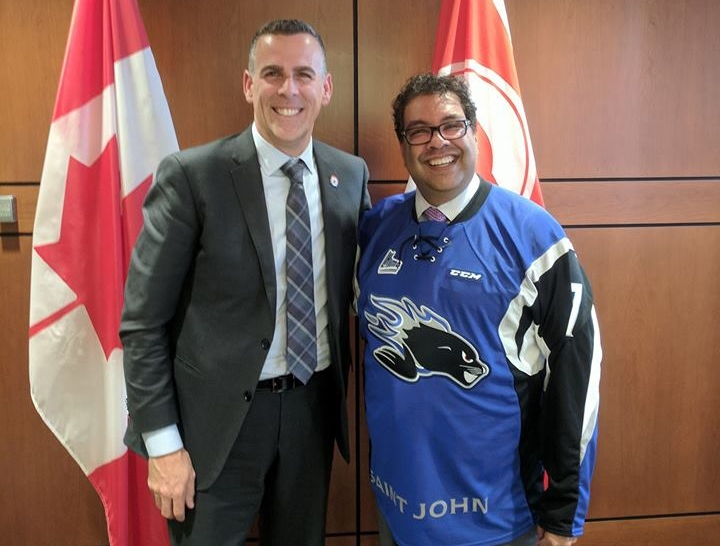 At what would have been the eastern end of the Energy East Pipeline, rookie Mayor Don Darling is in mourning.

The veteran businessman, elected mayor of Saint John, N.B. just last year, presides over a declining city in a declining province, and had been counting on Energy East to help turn the corner.

"This is a disappointment. It's an economic blow. I'm frustrated," Darling said Thursday.

The $15.7 billion pipeline project would have carried western crude to the Irving Oil refinery in Saint John and an export terminal for destinations abroad. TransCanada cancelled it Thursday, citing "changed circumstances."

While Quebec politicians like Montreal Mayor Denis Coderre and environmental activists celebrated the demise of the project, Darling lamented the loss of jobs and revenue.

"This a huge economic blow to Saint John, to New Brunswick and to the country," Darling said.

The Energy East Saint John Partners Forum had estimated the project would increase the provincial GDP by $6.5 billion, and create thousands of jobs over several decades.

Ian Whitcomb, president of the Saint John-based Irving Oil, called it the loss of a "once in a lifetime opportunity."

Darling said his once-affluent city — the oldest incorporated city in Canada — was looking to Energy East as a source of momentum to get the economy moving.

He said in the short term, the city of 67,000 people is facing a $4.5 million shortfall this year and needs to make tough decisions if it is to avoid raising the city's tax rate — already the highest in the region.

The 2016 census showed the population of Saint John fell by 3.6 per cent over the previous five years — falling from 70,063 to 67,575 — and losing its status as the largest city in the province.

A New Brunswick sociologist, Hassan Arif, likened the city to Detroit in a 2012 column for HuffPost, saying Saint John's decline isn't as severe but it faced similar challenges: They were both declining cities with growing suburbs, with concentrated urban poverty and a shrinking tax base. Both have multiple vacant and abandoned buildings.

Even before the Energy East announcement, Darling was openly expressing his concerns about his city's financial woes.

In a Facebook post Wednesday, Darling said "I'm tired, beat up, frustrated and sad. I'm all those things because we need to change," he wrote. "We are in a mess, this didn't happen overnight, it's been years in the making."

On Thursday, Darling said the Energy East project was "truly a test of our country and our ability to come together and we failed."

He blames the regulatory process and opponents of the project in Quebec.

"The fact that one of the provinces in our country appeared to do everything it could to block this project in any fashion — I think that was obviously a factor," he said.

Darling said his city needs help from the province and Ottawa — either a large project or a number of smaller ones to stimulate the economy.

"We need help. We need to work with the provincial government and Premier (Brian) Gallant is signalling that he is accepting my challenge that Saint John needs a new deal," he said. "We have to match actions with the reality and urgency we're facing as a community."

Gallant said Thursday energy is still a huge opportunity for Saint John, noting that the province is looking at various forms of renewable energy such as tidal power.

"There will be a new deal for Saint John," Gallant said. "As the industrial base of our economy, we need Saint John to be firing on all cylinders."

Darling said the city would take the next 30 days to more clearly define what help it needs from the other levels of government.

"All we want is a fighting chance to put Saint John on a more sustainable path," he said.