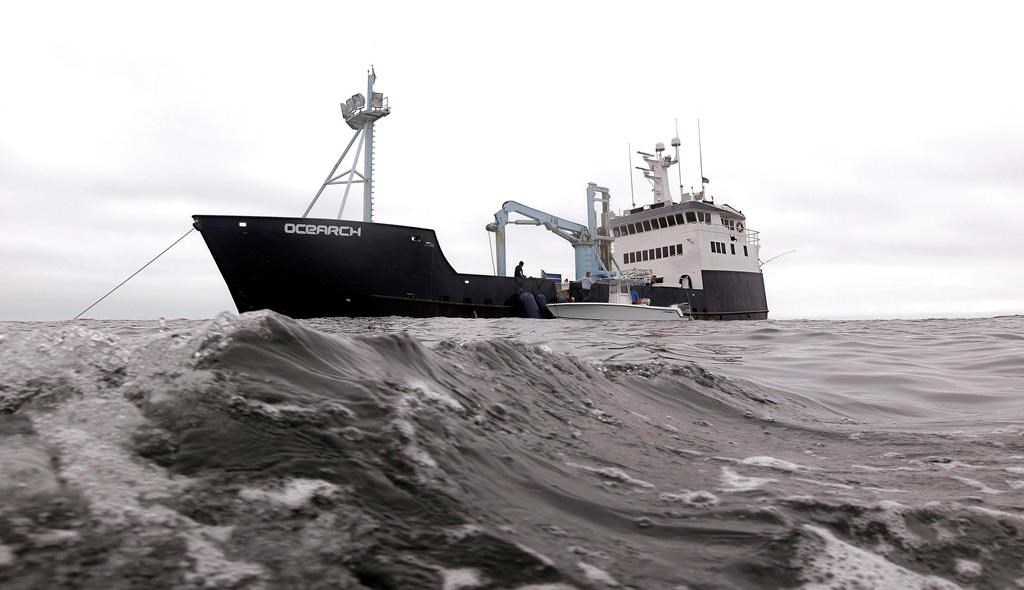 The research vessel Ocearch has sets her anchor as the crew begins their search for great white sharks on the Atlantic Ocean to tag and collect blood and tissue samples from. File photo by The Associated Press
Previous story

The movements of great white sharks in the Pacific and Indian oceans have long been the subject of academic study, but new research is just starting to shed light on the behaviour of their Atlantic Ocean counterparts.

Researchers in Massachusetts say white sharks appear to venture offshore farther, with more frequency and at greater depths than previously known in the Atlantic.

Some of the 32 sharks tracked between 2009 and 2014 ended up as far east as the Azores, the Portuguese island chain located more than 2,300 miles (3,701 kilometres) from Cape Cod, where most of the animals were initially outfitted with satellite tags.

They also were found to make frequent deep dives — as far down as 3,700 feet (1,127 metres) — and spend more time at those dark depths than previous studies in the Atlantic suggest.

The team, which included scientists from the state Division of Marine Fisheries, the Massachusetts Institute of Technology and the Woods Hole Oceanographic Institution, had its findings published last week in Marine Ecology Progress Series, a prominent scientific journal.

"Everything we knew previously indicated that the white shark in the Atlantic is more coastally-oriented, moving north-to-south and remaining on the continental shelf," explained Gregory Skomal, the study's lead author. "So what we're now describing is this other component, this offshore movement into open ocean."

Skomal says the work has implications for shark conservation efforts since it extends the known habitat for these ancient predators. White sharks are not considered endangered or threatened, but it's illegal to hunt them in U.S. waters.

"You've got U.S. protection within 200 miles of shore, but you have sharks clearly leaving that protection that are vulnerable to harvest," Skomal said. "We need to engage other countries fishing in these waters to talk about putting similar protections in place."

The research is exciting because it represents the "first real insights into the movement patterns of white sharks" in the northern part of the Atlantic, says Tobey Curtis, a Massachusetts-based shark researcher for the National Marine Fisheries Service who was not involved with the study.

"Prior to this, we were only able to piece together information about their distribution from widely scattered reports from fishermen, scientists and the public," he said. "Having tracks of individual sharks really helps fill in the gaps, and provides a more complete picture of white shark movements and migrations."

The study seems to hew closely to what's been observed of white sharks in other oceans — that juveniles tend to stay in the relatively shallower waters of the continental shelf where food sources abound, while adults are more apt to venture into open ocean, observes Christopher Lowe, a shark researcher at California State University in Long Beach also not involved with the research.

Indeed, most of the tagged sharks in the Atlantic study generally followed a north-south migration along the Eastern Seaboard.

They headed to Newfoundland and New England waters in the summer, then down south to the Carolinas and even the Bahamas for the winter.

Lowe says it remains to be seen what impact continued growth of white shark populations in the Atlantic has on these habits, or whether climate change is playing a role.

Another key question is finding out what these sharks are actually doing so far offshore.

Researchers in northern California suggest offshore movements are for mating, a ritual that has never been observed among white sharks. But Skomal and his team believe the animals are more likely foraging — it's just not immediately obvious what they're feeding on.