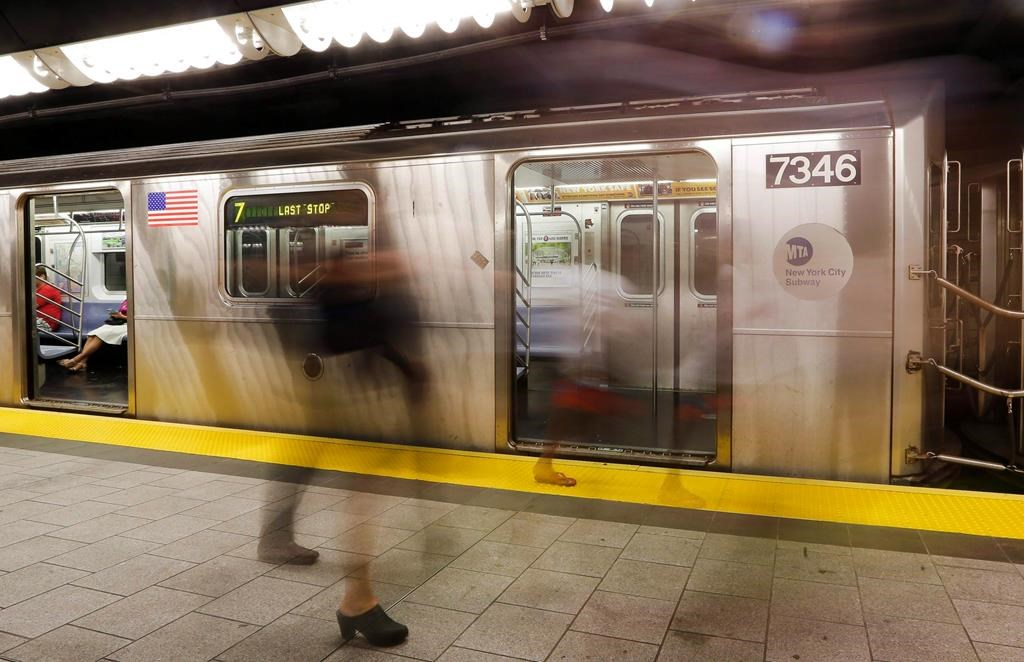 U.S. authorities said a 19-year-old Canadian pleaded guilty to terrorism-related charges in connection with what they call an ISIS-inspired plot to target landmarks in New York City more than a year ago, including Times Square and the city's subway system.

The U.S. Attorney's Office for the Southern District of New York says the Canadian, identified as Abdulrahman El Bahnasawy, of Mississauga, Ont., has been in custody since the FBI arrested him in New Jersey in May 2016.

The arrests were first announced Friday following a court's unsealing of federal terrorism charges against the three men. A spokesman for the justice department said late Friday that the case needed to be sealed for more than a year to protect the ongoing investigation, but he did not elaborate.

The other two accused are identified as Talha Haroon, a 19-year-old U.S. citizen residing in Pakistan, and Russell Salic, 37, from the Philippines.

U.S. authorities allege the three men communicated through Internet messaging applications, allegedly plotting to carry out bombing and shootings in heavily populated areas of New York City during the Islamic holy month of Ramadan in 2016.

They also allege that while in Canada, El Bahnasawy purchased bomb-making materials and helped secure a cabin within driving distance of New York City to use for building the explosive devices and staging the attacks.

El Bahnasawy and Haroon began communicating with an undercover FBI agent posing as an ISIS supporter, and declared their allegiance to the terror group.

El Bahnasawy stated to the agent that "[t]hese Americans need an attack" and that he aspired to "create the next 9/11" with plans to come to New York from Canada, American authorities alleged. They also said he sent the agent a photo of Times Square, saying, "[W]e seriously need a car bomb at times square. . Look at these crowds of people!"

The unsealed court documents also alleged that El Bahnasawy also expressed a desire to "shoot up concerts cuz they kill a lot people. ... We just walk in with guns in our hands. That's how Paris guys did it," the papers said in an apparent reference to the slaughter by men armed with assault weapons at the Bataclan concert hall in Paris during a performance of the rock group Eagles of Death Metal in 2015.

The documents said El Bahnasawy purchased and arranged to have bomb-making equipment, including 18 kilograms of hydrogen peroxide, shipped to the agent in the U.S. ahead of the planned attack.

The RCMP issued a statement saying it collaborated with the FBI in the investigation that led to El Bahnasawy's arrest.

The statement also says that at no time was the safety or security of the public at risk.

"This investigation is a good example of how law enforcement must continually work together to rapidly to gather evidence, irrespective of where that evidence may be found, to interdict those who would commit terrorist atrocities," it says.

The charges against El Bahnasawy include conspiracy to use weapons of mass destruction and conspiracy to commit acts of terrorism transcending national boundaries, both which carry a maximum penalty of life in prison.

El Bahnasawy is scheduled to be sentenced on Dec. 12, 2017. His attorney, Sabrina Shroff, declined to comment Friday.

American justice officials said extradition proceedings are ongoing in Pakistan and the Philippines to bring the other two suspects to the U.S. to face the charges.

With Files from The Associated Press