Manslaughter charges against alleged fentanyl dealers piling up across Canada 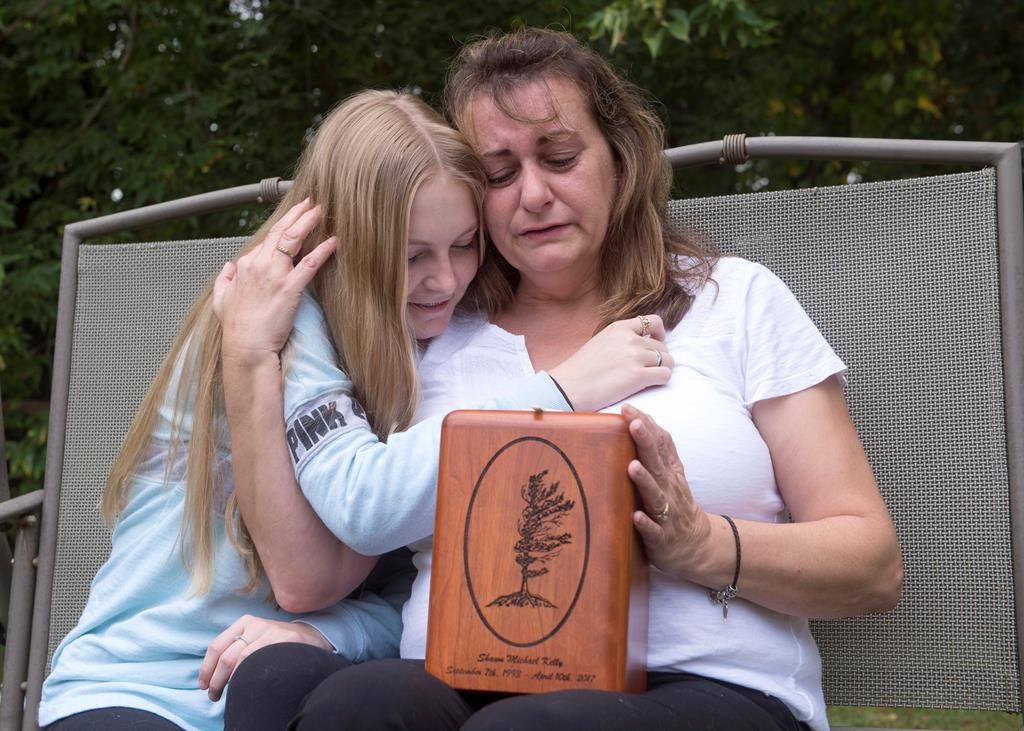 Denise Lane and her daughter Megan sit with the urn containing the ashes of her son Shawn in Innisfil, Ont. on Friday, October 6, 2017. Photo by The Canadian Press/Frank Gunn
Previous story
Next story

Denise Lane searches her mind for fond memories of her son, but she has trouble retrieving them. No Christmases, no birthdays. It's hard to remember the good times.

Instead, her mind turns again and again to the memory of her son at their home one morning in April. He was slouched over on the side of his bed, one leg tucked under the other, his head dropped down on his chest.

Even here, her memory is spotty: screaming for her daughter, hugging her 23-year-old boy, feeling his cold skin. She remembers trying to lay him down to perform CPR, but she couldn't get him flat. She remembers kicking as officers pulled her away. She remembers demanding to see her son one last time as he lay in a body bag in her kitchen.

Shawn Kelly Jr. died of a fentanyl overdose that morning in Innisfil, Ont., about an hour's drive north of Toronto.

South Simcoe police began investigating immediately. Within a few days they arrested one man for trafficking. A few weeks later they arrested another for the same offence.

In late August they lowered the boom, laying manslaughter charges against the pair for Kelly's death.

Lane recalls feeling happy when she learned of the development.

"My son didn't deserve to die, he didn't deserve for these people to sell him this shit and for me to wake up in the morning to find him dead," she says. "Shawny may have held a gun to his own head, but the people that sold it to him are the ones that pulled the trigger."

Several forces and prosecutors across the country are now laying manslaughter charges against those who allegedly supplied fentanyl to people who overdosed and died.

For South Simcoe police, laying such charges is partly about sending a message to dealers of the powerful opioid.

"We're trying to show that when we have the information, we're going to pursue the people providing this because it's causing death in our communities," says Det. Sgt. Brad Reynolds, who oversaw the investigation into Kelly's death.

Once tests came back from the coroner saying Kelly died of a fentanyl overdose, prosecutors suggested police lay the manslaughter charges, he says.

The case is still in it's early stages. A lawyer for one of the accused said his client maintains his innocence, while a lawyer for the other accused noted that the details of the case are allegations at this point.

Reynolds says evidence will show Kelly asked specifically for fentanyl that was allegedly provided by the two accused. It wasn't a case of another drug, like cocaine, being tainted by fentanyl, he notes.

"We think it's a fairly well known fact that the ingestion of fentanyl can cause death. They are supplying something they know could cause death to the person purchasing it," Reynolds says. "That's where manslaughter comes in."

In some ways, the approach is a fresh take on an old tactic.

Manslaughter charges against drug dealers came to prominence in the early 1980s when actor John Belushi died in California of a drug overdose. Canadian Cathy Smith was convicted of involuntary manslaughter in a plea deal after being prosecuted for second-degree murder. She injected Belushi with speedballs — heroin and cocaine — and it was the heroin that killed him.

Experts say the tactic to charge drug suppliers with manslaughter is not a stretch legally.

In 1993, the Supreme Court of Canada upheld a manslaughter conviction against Marc Creighton who provided and injected cocaine into a woman's arm with her consent. She began convulsing, went into cardiac arrest and choked to death on her own vomit.

"The law is clear that you do incur a liability for death resulting from your distribution of a drug," says Alan Young, a York University law professor. "That's because the mental state fault requirement for manslaughter is very low — the objective forseeability of bodily harm, not even death."

Kent Roach, a law professor at the University of Toronto agreed.

"Given that it's pretty notorious what fentanyl does to people, it seems to me like a logical progression," he says.

Ontario Provincial Police have laid two charges against alleged fentanyl traffickers and are investigating three others. A spokeswoman says the force anticipates more such charges as fentanyl deaths rise.

In Edmonton, police have laid manslaughter charges against two alleged fentanyl suppliers in two separate cases in the past year.

"When a person knowingly distributes a drug that is so lethal, and it results in a person's death, all efforts will be exhausted to identify and hold that person accountable," says spokeswoman Noreen Remtulla.

But there's a different approach in Vancouver, a city mired in a fentanyl crisis, where police haven't laid any manslaughter charges against alleged fentanyl dealers.

"This is a complex issue that our investigators have considered at length," says Const. Jason Doucette, noting that officers investigate every sudden death in the city and go where the evidence leads them.

"I believe charges and convictions in this area are fairly rare, and are usually only successful when a unique set of circumstances and evidence exist for that particular case."

At least 2,816 Canadians died from opioid-related causes in 2016 and the country's chief public health officer predicts that number will surpass 3,000 this year.

Back in Innisfil, Kelly's mother says her son — himself a father of two — told his parents last March that he was addicted to oxycodone. But he didn't want to kill himself, she says.

"He was going to work the next day, he had two little boys to live for. He was on the right path," she said. "My son turned to the wrong people and he's no longer here."