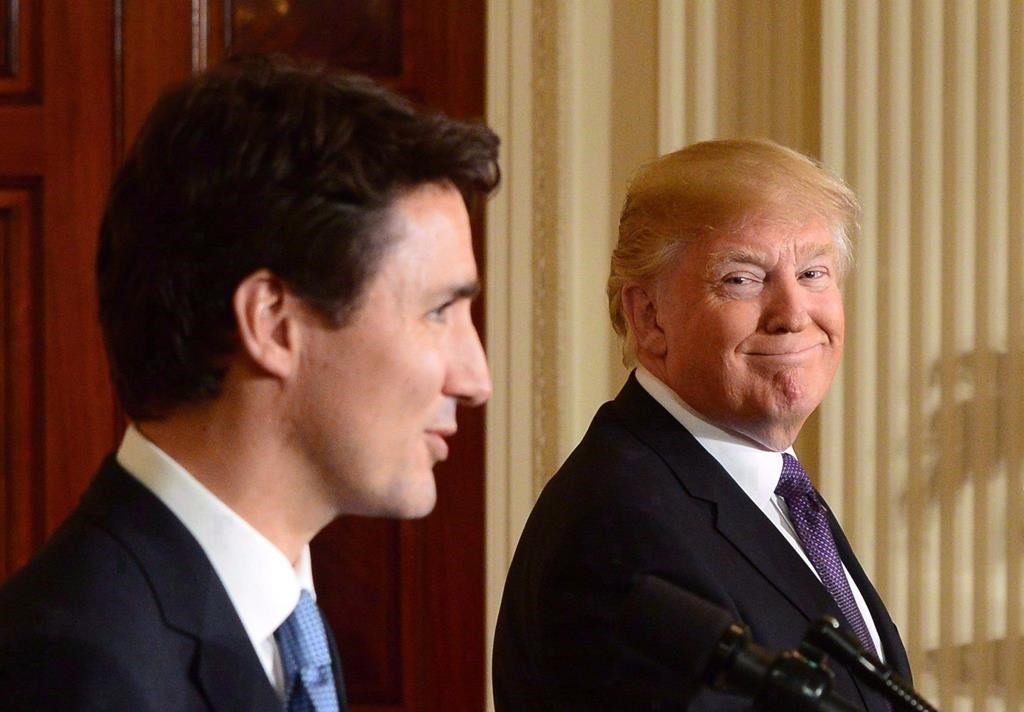 In an ironic scheduling twist, the current prime minister and his predecessor will both be in Washington, speaking on the same day, about the same issue: the renegotiation of NAFTA, which enters a high-stakes phase this week.

The former Conservative prime minister is on a panel at an event hosted by Dentons law firm that also features Newt Gingrich, a Trump confidant and former top U.S. lawmaker, and by U.S. Commerce Secretary Wilbur Ross.

Some people in the senior ranks of the Canadian government and at Washington's Canadian embassy were caught off-guard by Harper's itinerary —those contacted by The Canadian Press last week said they were unaware Harper would be there on the same day as Trudeau.

One Liberal joked he'd spent enough time in his life worrying about Harper's plans and didn't intend to fret about them this week.

The law firm timed the event to coincide with the fourth round of NAFTA negotiations, which runs Oct. 11 to 15 in Washington and which are expected see a ratcheting up in intensity as countries begin to broach more difficult issues.

Trudeau touches down in Washington late Tuesday and he's expected to raise the nearly 300 per cent duties on Bombardier planes, and duties on softwood lumber with Trump, but NAFTA will likely dominate.

The countries have encountered difficulties on simpler issues even before the NAFTA negotiations have entered anticipated trouble areas like car parts, dairy and dispute resolution, leading some observers to suggest the talks are in trouble.

Agriculture Secretary Sonny Perdue, a pro-NAFTA member of Trump's team, has expressed disappointment in the progress so far.

"But we think this is the way these things get going," Perdue said at a Washington gathering last week.

"If you've ever watched a boxing match they circle one another for a while. I think we've done circling. So we're gonna lay some things on the table in this next round."

Canada's lead minister on the NAFTA file said difficult negotiations were to be expected.

"This administration is the most protectionist U.S. administration since the 1930s... Proudly (so)," Foreign Affairs Minister Chrystia Freeland told CTV's Question Period over the weekend.

"That certainly poses some difficulties in a free trade negotiation."

Trudeau will not only be meeting with the president during his U.S. trip but also with key American lawmakers with special power over trade — including the ability to sink or save an international agreement.

Trudeau will be on Capitol Hill on Wednesday morning for a rare meeting between a foreign head of government and the full gathering of the House of Representatives' Ways and Means committee.

That committee and the Senate Finance committee have a unique mandate under the U.S. fast-track law to help American trade negotiators design U.S. positions.

They would also be responsible for shepherding any eventual agreement through votes in Congress.

On top of that, these committees would likely design the response from Congress if Trump tries to cancel NAFTA, which he has repeatedly threatened to do, and some legal scholars argue a full repeal requires congressional approval.

Trudeau will head from Capitol Hill to the White House for a meeting with the president on Wednesday afternoon, as Harper appears at Dentons. Trudeau and Trump are expected to make informal remarks to media but not hold a formal press conference together.

Trudeau leaves Washington on Thursday for Mexico, where he meets with President Enrique Pena Nieto.

I think there's gonna be a

I think there's gonna be a gum-fight!