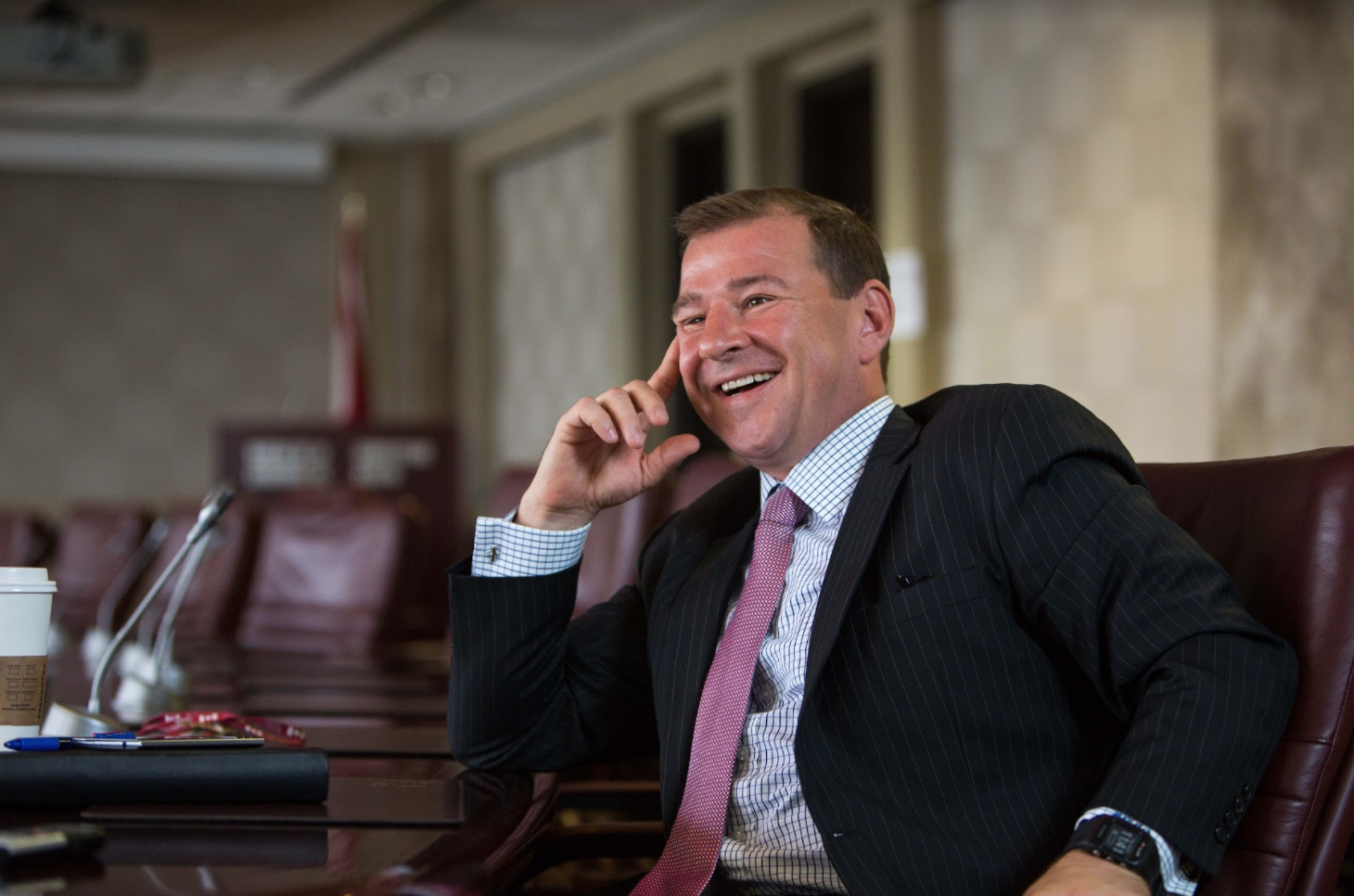 Matthew Boswell became the senior deputy commissioner of the Competition Bureau's mergers and monopolistic practices branch after a long career of catching white collar criminals. He is seen here on Aug. 22, 2017. Photo by Alex Tétreault
Previous story
Next story

According to Matthew Boswell, a former Crown attorney, white collar crime is more widespread in Canada than most consumers realize.

Those calls about a surprise cruise to Belize you won? That automated airline survey asking for your credit card number? Many people brush off these overt and phony attempts to obtain personal information, but Boswell says mass marketing fraud is a serious criminal offence.

Now a senior deputy commissioner with Canada's Competition Bureau, he cracks an undeniable smile when he talks about his "past life" catching such white collar criminals from the streets of downtown Toronto. It's no laughing matter of course, but sitting in a bright federal government boardroom near downtown Ottawa, he admits, “it was actually great fun” going after them.

"I think it’s very important in Canada and elsewhere to vigorously pursue white collar crime," he says, clutching a large coffee in a bright boardroom of the Competition Bureau's towering office in Gatineau, Que.

The federal agency has recently investigated some high-profile scandals related to bad corporate behaviour. Last December, it reached an agreement with Volkswagen and Audi in Canada, requiring them to pay a $15-million penalty for false or misleading marketing claims about the environmental performance of their vehicles. This penalty was on top of a $2.1-billion settlement that the automakers had offered motorists in response to a class action lawsuit.

Both payouts followed a U.S. investigation that found that Volkswagen and Audi were cheating on pollution tests.

"It’s not like we live in a country where you’re at risk of being a victim every single day," says Boswell, "but there are lots of opportunities out there to be defrauded... whether it’s things like boiler rooms, securities fraud, mass marketing fraud — municipalities and governments can be the victims of cartels, and in fact are."

Boswell has spent many years taking down corporate crooks and shared his experience in an interview so that fewer Canadians will fall prey to a range of deceptive marketing practices.

From Bay Street to the bureau

Boswell started his career at a big law firm on Bay Street, the beating heart of Toronto’s financial district. It was a pretty good gig for a young law school graduate, but eager to spend more time in court, he soon took a job as a Crown attorney.

For seven years, he prosecuted Criminal Code offences — “everything from drinking and driving to murder and sexual assault." He was the “Gun Crown” for northwest Toronto in 2005, he adds, when the city suffered from a record 359 shootings. It was a deadly year that would later be known as the ‘Summer of the Gun.’

“You end up seeing sort of the worst of society in terms of crimes and horrific things,” says Boswell. “I don’t think you can escape that without being a bit jaded and cynical about the world.”

His next job would do nothing to improve that cynicism. In 2007, he joined the Ontario Securities Commission's inaugural 'Boiler Room Unit,' a team of ex-lawyers and cops who broke up boiler rooms — fake call centres where people use high-pressure sales tactics to convince people to buy into fake companies before making a break for it with the cash.

The unit was launched following criticism of the watchdog’s effectiveness in cracking down on crimes against investors. Boiler rooms were a "fairly big problem" in Ontario at the time, says Boswell, and lured innocent people in with glossy fake websites and promises that shares would skyrocket overnight. He makes no attempt to put government polish on the likes of the people involved.

"...Their mission every morning getting out of bed, if you can imagine this, was to defraud unsuspecting, innocent people, get as much money out of their pockets and then disappear," he says matter-of-factly. "These guys are terrible people."

According to Boswell, the team was pretty darn good at taking them down. Much of their work resulted in prison time, he says, which was particularly rewarding given that Canada didn’t have “a great track record” on sending people to jail for fraud at the time.

“We knew who they all were, they knew who we were," Boswell recalls. "...You felt like you’re actually doing good work by pursuing these guys — and they were almost all guys — bringing them in front of the courts and getting them sent to jail.”

As the list of their successes piled up, Boswell was recruited in 2011 to work for the federal government. Canada's Competition Bureau — an independent law enforcement agency that protects Canadian businesses and consumers — wanted him for senior leadership of their criminal matters branch.

It was supposed to be a two-year secondment, but Boswell never left.

The impact of white collar crime on society is "really quite staggering," he says. In private practice, Boswell says he once went after a man who "ripped off an elderly man in Windsor" for every cent he owned in the last year or two of the man's life.

"I would love to see more awareness by Canadians of white collar crime issues, fraud issues, scam issues," Boswell tells National Observer. "It sounds cynical, it sounds depressing, but the more that every single Canadian questions deals or (someone who tells them), 'This offer is so amazing,'...I think it would help us in our work because there would be fewer victims, but it would also help people just going about their daily life."

According to the federal Criminal Intelligence Service Canada, organized financial crime, which includes credit and debit card fraud, costs Canadians roughly $5 billion every year — the equivalent of $600 per family of four.

Cartels conspire to fix prices, rig bids and tenders, and restrict market supplies while maintaining the illusion that they’re competing with each other. Among the 35 member countries of Organisation for Economic Co-operation and Development (OECD), such collusion and bid-rigging is estimated to increase the cost of a government's procurement by 20 per cent or more — a burden that ultimately befalls the taxpayers.

"There’s more work than we’d like, which isn’t a good thing," says Boswell. "That means there’s activity out there that requires serious investigation."

Triage within the bureau

Canada's Competition Bureau receives some 14,000 complaints and information requests per year, nearly 10,000 of which relate to deceptive marketing practices. The agency encourages the public to come forward with any information related to possible criminal or fraudulent activity, but according to Boswell, "can't possibly investigate everything."

Earlier this year, the bureau came under fire from critics for halting an investigation into allegedly misleading climate change denial advertisements paid for by right-leaning think tanks in order to ensure the "effective allocation of limited resources." In December 2008, the Global Competition Review awarded the agency a three-and-a-half star "good" rating, but warned that its reputation "appears to have faltered" amidst a notable decline in cartel fines and a "scant" record of enforcement against companies that abuse their industry dominance.

Boswell says the bureau has "finite resources," and at times, must choose which investigations to prioritize based on their level of public interest. The agency's results have since improved, and in February 2017, the Global Competition Review nominated the bureau for "Agency of the Year" in the Americas for its work conducted in 2016.

"We do our best to sort of triage and go after cases that are the most meaningful cases to Canadians, have the highest impact for Canadians, protect Canadians the most," he explains. "We get court-authorized search warrants. We have the ability to get wire taps. We don’t do that frequently, but we do use that tool to advance our cartel cases."

Many of the cases are brought forward by whistleblowers, Boswell adds. Whistleblowers are protected by law, he explains, and individuals who have been involved in the anti-competitive activities they disclose may be eligible for federal immunity or leniency programs.

Over the years, the Competition Bureau investigations have resulted in record fines from courts for bid-rigging in the internal sale of car parts — $30 million to the Japanese Yazaki Corporation, $13.4 million for Mitsubishi Electric, and $13 million to the Showa Corporation. Since April 2013, the 'motor vehicle component case' has yielded 11 guilty pleas and more than $84 million in fines.

But the bureau's investigations are diverse: during the 2016 to 2017 fiscal year alone, it took on the Toronto Real Estate Board for anti-competitive practices tied to restricting online housing market data, sued the Hudson Bay Company over alleged deceptive regular price claims and clearance promotions, and filed a Tribunal application to stop the Vancouver Airport Authority from restricting competition for in-flight catering.

Its work that year resulted in $13.28 million in fines for cartel pieces, five guilty pleas, two individuals sentenced, and one company charged criminally.

Asked if ever sympathizes with those convicted of such crimes, Boswell says "never ever." There may be two sides to white collar criminals — mental health or gambling issues being two examples — but that's not enough to make him feel sorry for them.

"In the OSC (Ontario Securities Commission) context...Their entire raison d’être is to rip people off; rip innocent, unsuspecting, trusting Canadians off. I don’t know how you can sympathize with that," he tells National Observer. "Maybe I’m overly callous, I don’t know. But at the end of the day... they’re doing is still reprehensible and I can’t condone it."

The bureau is currently partnering with Public Services and Procurement Canada to develop a pilot project that put bidding data through screening technology in an attempt to detect bid-rigging more easily.

Editor's Note: This story was updated on Wed. Oct. 11, 2017 at 11:45 a.m. to correct a factual error. The previous version incorrectly cited a 2008 review result as having been a review from 2016. A phrase was also added for clarification.

OPEC cuts its oil production forecasts for US, other states not part of the cartel

What a sweet article

What a sweet article describing how much fun he has going after white collar criminals and protecting the public. Unfortunately, Mr. Boswell's efforts amount to nothing more than a slap on the wrist. Take the example of Volkswagon. That company was forced to admit that it purposely engineered its vehicles to break the law. See this article at Phys.org that reports on some of the consequences: "The researchers estimate that 1,200 people in Europe will die early, each losing as much as a decade of their life, as a result of excess emissions generated between 2008 and 2015 by affected cars sold in Germany." (Read more at: https://phys.org/news/2017-03-volkswagen-excess-emissions-premature-deat...)

How many Canadians did VW kill because VW intentionally and willfully broke the law? That's a law designed to prevent premature deaths.

So what happened to VW? Oh, a little fine--a slap on the wrist. VW still made a profit. None of the corporate criminals landed in jail for intentionally breaking a law and causing deaths. Now, just imagine a street youth on a freezing winter night who breaks into a VW dealership and falls asleep in the back room. If she gets caught, it's off to jail for her. We can ignore the culpability of the corporate criminals but, by golly, that kid was trespassing on VWs private property and must go to jail.