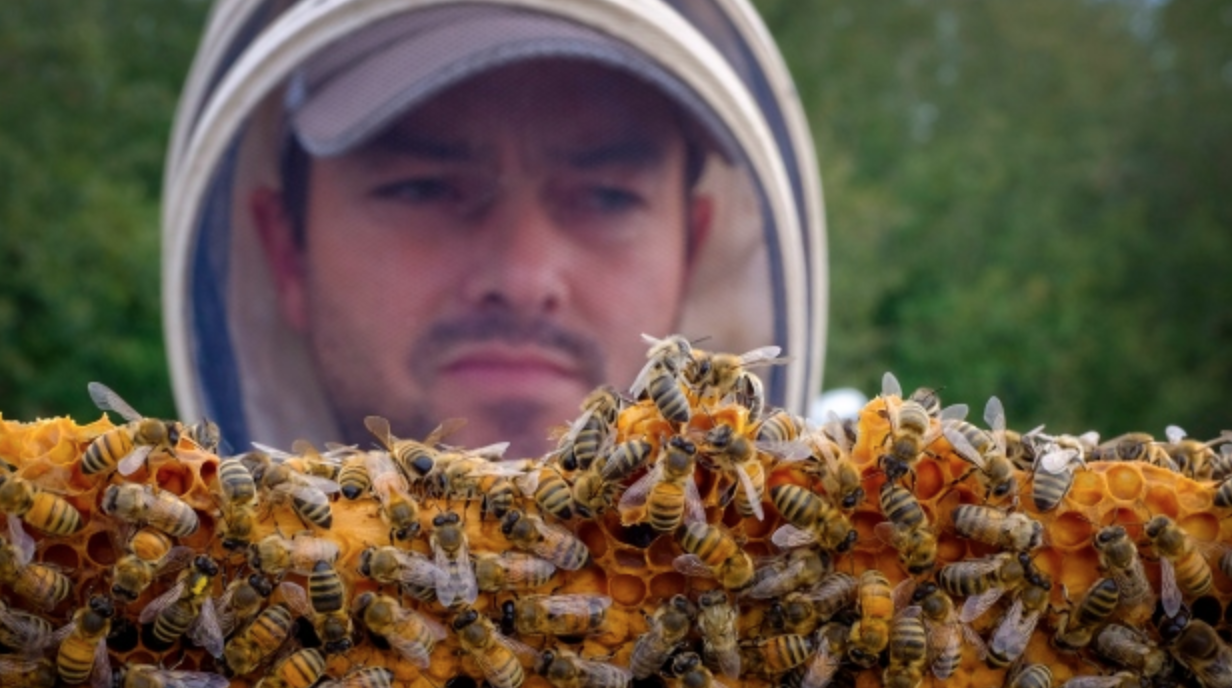 Beekeeper Kevin Nixon surveys some of his honey bees near Innisfail, Alta. File photo by The Canadian Press
Previous story
Next story

The Canadian government is banning plastic microbeads in toiletries.

Although designed to clean us, they’re polluting the environment, putting the health of fish, wildlife and people at risk. Manufacturers and consumers ushered plastic microbeads into the marketplace, but when we learned of their dangers, we moved to phase them out.

Why, then, is it taking so long to phase out the world’s most widely used insecticides, neonicotinoids? Scientists have proven they’re harming not only the pests they’re designed to kill, but also a long list of non-target species, including pollinators we rely on globally for about one-third of food crops.

Neonics are systemic pesticides. Plants absorb and integrate them into all tissues — roots, stems, leaves, flowers, pollen and nectar. First introduced in the 1990s, they now account for one-third of the global pesticide market. Agricultural applications include leaf sprays, and seed and soil treatments. They’re also used for trees, turf products, and flea and tick treatments for pets.

We’ve known about neonics’ harmful impacts on pollinators and ecosystems for years, but this summer, two major scientific releases added significantly to the ever-growing body of research proving widespread use of these toxic chemicals must stop.

On Sept.18, the Task Force on Systemic Pesticides — an international group of independent scientists convened by the International Union for Conservation of Nature — released an update to its 2015 Worldwide Integrated Assessment of the Impact of Systemic Pesticides on Biodiversity and Ecosystems. The 2017 update takes into account more than 500 additional peer-reviewed studies, revealing broader impacts and reinforcing the 2015 conclusions that neonics represent a major worldwide threat to biodiversity, ecosystems and the services nature provides.

On Oct. 6, task force scientist Edward Mitchell and an interdisciplinary team from the University of Neuchâtel and the Botanical Garden in Neuchâtel, Switzerland, published a study in Science, which found three-quarters of the honey produced throughout the world contains neonics. Although concentrations were below the maximum authorized for human consumption, they surpassed levels proven to affect bees’ behaviour, physiology and reproductive abilities.

Conducted in 2015 and 2016, the study analyzed 198 honey samples from around the world, searching for the five most common neonics: acetamiprid, clothianidin, imidacloprid, thiacloprid and thiamethoxam. Seventy-five per cent contained at least one, with proportions varying considerably by region. The highest levels were in North America (86 per cent), Asia (80 per cent) and Europe (79 per cent), with the lowest in South America (57 per cent).

Thirty per cent of all samples contained a single neonicotinoid, 45 per cent contained between two and five and 10 per cent contained four or five. Regulators don’t tend to consider the “cocktail effects” of contamination by multiple neonics. The impacts on bees, humans and other organisms are still undiscovered, but I bet they won’t be good.

These new findings restate the need to stop all mass-scale systemic pesticide use. Maintaining the status quo means continuing environmentally unsustainable agricultural practices. After all, the latest science also shows that in many cases, neonics provide little or no real benefit to agricultural production. Instead, they decrease soil quality, hurt biodiversity and contaminate water, air and food. They can’t even be relied on to decrease farmers’ financial risk or assist significantly with crop yields.

What are governments doing with this information?

In 2013, the European Union imposed a moratorium on certain uses of three neonics on bee-attractive crops: imidacloprid, clothianidin and thiamethoxam. The EU is now considering extending the moratorium. Meanwhile, the new French biodiversity law aims to ban all neonics starting in September 2018. North American regulators, meanwhile, have failed to recognize the urgent need to prevent neonics from further contaminating the environment.

Health Canada’s Pesticide Management Regulatory Agency has proposed phasing out one neonic, imidacloprid, but not until 2021 at the earliest — possibly as late as 2023. While industry continues to lobby Ottawa to continue using the toxic chemicals, environmental groups are calling for faster phase-out plans and an end to neonic use.

If we care about the quality and security of our food sources — and the species and ecosystems they rely on — the time for neonics is over. Sustainable and affordable agricultural and pest management practices exist. It’s time to ban bee-killing pesticides.

GRRRR! I cook and bake with

GRRRR! I cook and bake with honey, to avoid sugar which has so many health problems. My husband's ankylosing spondylitis can be kicked into almost immediate inflammation by sugar (even organic) but it has never responded in a negative way to honey. To now realize it is just another form of poison is so disheartening. Is there a test individual companies do to show the level of neonicotinoids in their products? Is there a test consumer groups could do to establish which brands of honey are clean and which are not clean? It is pretty amazing that each direction we look reveals our government's complicit work with corporate criminals at the expense of citizens and the climate of our world. Thank you for this informative article, which really upset me.

It's sad to know NO honey is

It's sad to know NO honey is organic, despite all the best efforts by beekeepers.

Ongoing sparring amongst commodity producers, chemical and seed companies, and honey producers are fraught with the same factual science vs. financial greed of the oil and gas industry deniers of climate change.