Trudeau turns attention to Mexico in midst of tensions over NAFTA 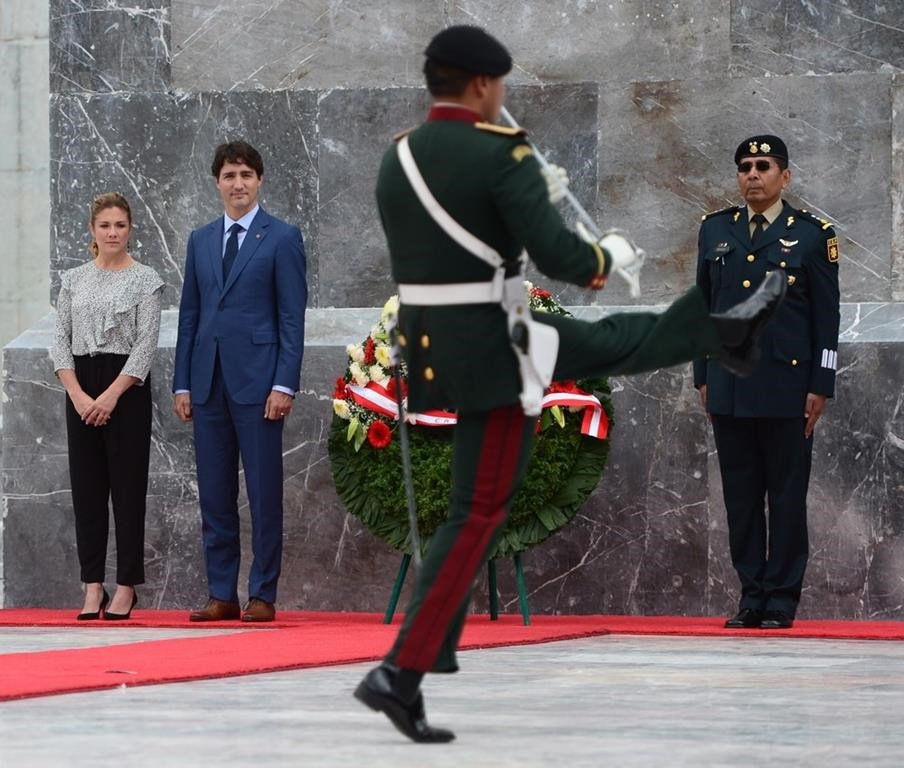 Justin Trudeau departed the U.S. capital for Mexico City on Thursday, leaving behind one country with mixed feelings about the North American Free Trade Agreement and landing squarely in another.

The prime minister finally acknowledged Wednesday the possibility of North America without NAFTA after a day of Washington meetings that included pointed pessimism from U.S. President Donald Trump about the fate of trilateral trade pact.

Prior to sitting down with Trudeau, Trump said it would be fine if the North American Free Trade Agreement was just terminated, although members of Congress expressed hope earlier in the day it could be reworked.

A similar tension appears to exist in Mexico, where President Enrique Pena Nieto has pledged to defend the deal, but some of his senior leadership appear to be laying groundwork for it to fail.

The country's foreign relations secretary said this week it would not be a big deal for Mexico to just walk away from the talks, and that Mexico won't accept "limited, managed trade" — an apparent reference to demands for higher U.S. and regional content rules on products like auto parts.

Meanwhile, a veteran Mexican diplomat has expressed fears about the possibility that NAFTA could be ditched in favour of bilateral agreements, an issue raised by Trump as well.

"Some of us in Mexico think that on several occasions our Canadian friends have come close to throwing us under the bus," said Arturo Sarukhan, the former Mexican ambassador to the U.S., said at a NAFTA-related event hosted by Dentons law firm in D.C. on Wednesday.

"How do we Mexicans ensure (our) Canadian friends stay focused on a trilateral approach?"

Trudeau was asked whether a bilateral deal with Mexico could be in the cards should the trilateral talks fail.

He said he knows there are other paths that could be pursued, and they'll be followed if necessary.

For now, he remains optimistic.

"So saying, we are ready for anything and we will continue to work diligently to protect Canadian interests, to stand up for jobs, and look for opportunities for Canadian business and citizens of all of our friends and neighbour countries to do well."

A lone bugle blast signalled the start of Trudeau's arrival in Mexico City, where an honour guard stood at the ready to welcome him and his wife, Sophie Gregoire Trudeau, for a full afternoon of events.

Dozens of Mexican journalists were on hand to cover the event — unusual for the largely ceremonial arrival of a state leader — as was a high-level political entourage, including Pena Nieto's foreign secretary Luis Videgaray and Carlos Sada, Mexico's undersecretary for North America.

Trudeau's visit to Mexico is his first official sojourn to the country and follows Pena Nieto's visit to Canada in June 2016.

That meeting resolved some long-standing disputes between the two countries, including a reopening of Mexico to Canadian beef and an end to the visa requirement the former Conservative government imposed on Mexican nationals over asylum claims.

The vast majority of those claims went on to be denied, and the Tories had suggested Mexicans were trying to take advantage of Canada's system, an approach that went on to become a major diplomatic irritant.

Since the visa requirement was lifted, tourism between Canada and Mexico has increased, though asylum claims have too; close to 950 have been lodged since the start of this year, compared to 250 in 2016. The year before the visa was imposed there were 9,500.

But Pena Nieto's time at the helm of the Mexican government is coming to an end, with elections in his country scheduled for 2018.

That vote is one of the reasons NAFTA negotiators have been hoping to get a deal signed by year's end.

One of Trudeau's goals for the Mexico trip, however, is to lay the groundwork for a solid working relationship with whomever will succeed Pena Nieto.

Trudeau will address the Mexican Senate on Friday to send a signal that Canada considers Mexico one of its top partners and wants to continue to work together on a number of fronts.

He's also expected to tour recovery efforts in the country on Thursday as a show of solidarity following two major earthquakes last month.

Tens of thousands of homes and apartments were destroyed and will have to be rebuilt following the Sept. 19 magnitude 7.1 quake, which killed 369 people, and an earlier, even more powerful one that struck in southern Mexico on Sept. 7 with a magnitude of 8.1.

Trudeau left Washington bullish on NAFTA, but admits Canada is 'ready for anything'

Trudeau emerged from meetings in the U.S. capital Wednesday acknowledging his enthusiasm for the North American Free Trade Agreement can only go so far and there exists the possibility the trilateral pact with the United States and Mexico is in trouble.

"It is very important and very possible to get a win-win-win ... out of these negotiations," Trudeau told a news conference on the roof of the Canadian Embassy.

"So saying, I think it's been clear that circumstances are often challenging, and we have to be ready for anything — and we are."

What anything could look like was raised by Trump in his talks with Trudeau earlier Wednesday at the White House.

Terminating the deal is one option he alluded to, and in the past Trump's said doing so would allow something completely new to be written.

Or perhaps separate bilateral deals with Canada and Mexico will be the way forward, the president suggested.

But the U.S. president also said it's too early to give up on the negotiations. "I think we have a chance to do something very creative that's good for Canada, Mexico and the United States."

Trudeau wouldn't say Wednesday at what point Canada might be prepared to walk away, if ever.

But repeating the "ready for anything" sentiment multiple times suggested a conscious decision to acknowledge that the outcome of the talks may not go Canada's way.

"We are very aware that there are other potential paths out there, we will address them as they arise."

"The president had indicated earlier that he was receptive to a trilateral, or two matching bilaterals, or (ending) NAFTA," he told a panel discussion late Wednesday.

"I think all he's really saying is he's keeping his options open."

There are multiple sticking points in the talks, some of which were raised at meetings Trudeau held earlier Wednesday with the key House of Representatives committee that oversees trade.

But he also asked for more access to Canada's dairy market. A Democratic colleague called on Canada to loosen its protections for cultural industries, exempted from the current NAFTA.

Trudeau defended Canada's limits on dairy imports, according to a lawmaker present in the meeting, saying the prime minister countered by pointing out the U.S. has plenty of support programs propping up its own farmers.

— With files from Alexander Panetta and the Associated Press

Stephen Harper offers a gloomy take on the state of international trade, NAFTA

The art of not getting a deal: Trump tactics seen as way to kill NAFTA

stay in mexico deadbeat pos with you're useless bimbo c