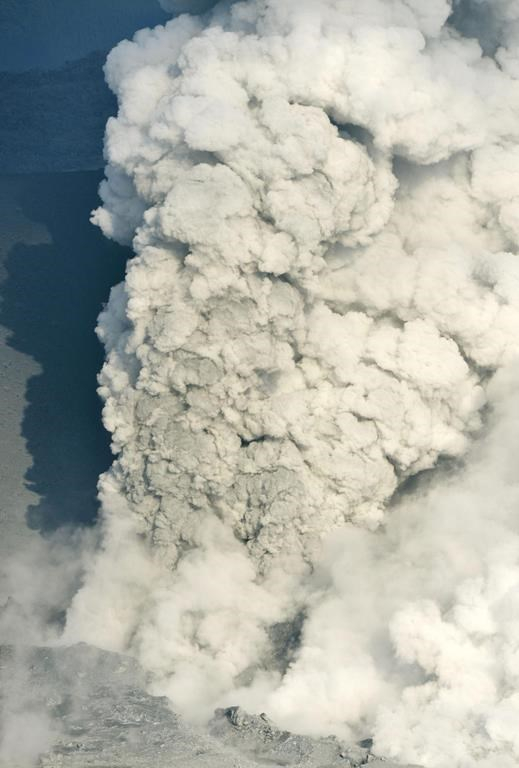 Volcanic smoke rises from the Shinmoedake volcano after its eruption in the border of Kagoshima and Miyazaki prefectures, southwestern Japan, on Oct. 12, 2017. Photo by Tomoaki Ito/Kyodo News via AP
Previous story
Next story

A volcano in southwestern Japan is erupting for the first time in six years, spewing ash over nearby farms, cities and towns.

Japanese broadcaster TBS showed elementary school students wearing helmets and masks Thursday on the way to their school at the foot of the Shinmoedake volcano. Residents also described hearing rumbles from the volcano and ash fell in at least four cities and towns in Miyazaki prefecture.

Street cleaners swept ash from city streets, and farmers used leaf blowers to clear the growing piles of ash from the tops of their plastic greenhouses.

The volcano on the border of Kagoshima and Miyazaki prefectures started erupting Wednesday for the first time in six years.

On Thursday, an ash plume rose 2,000 metres (6,560 feet) from the crater, the Japan Meteorological Agency said.

The agency has raised the volcanic alert level from 2 to 3 on a scale of 5. Level 3 warns people to not approach the volcano.

It said pyroclastic flow, which is an emission of hot gases and volcanic matter at high speed, is possible within 2 kilometres of the crater. Emissions of ash and volcanic rocks were forecast through Friday for a wider area, but the locations at risk would depend on wind conditions and altitude.

The seismically active area around the Pacific known as the "Ring of Fire" includes active volcanoes in Japan as well as two causing mass evacuations in Indonesia and Vanuatu in recent weeks.