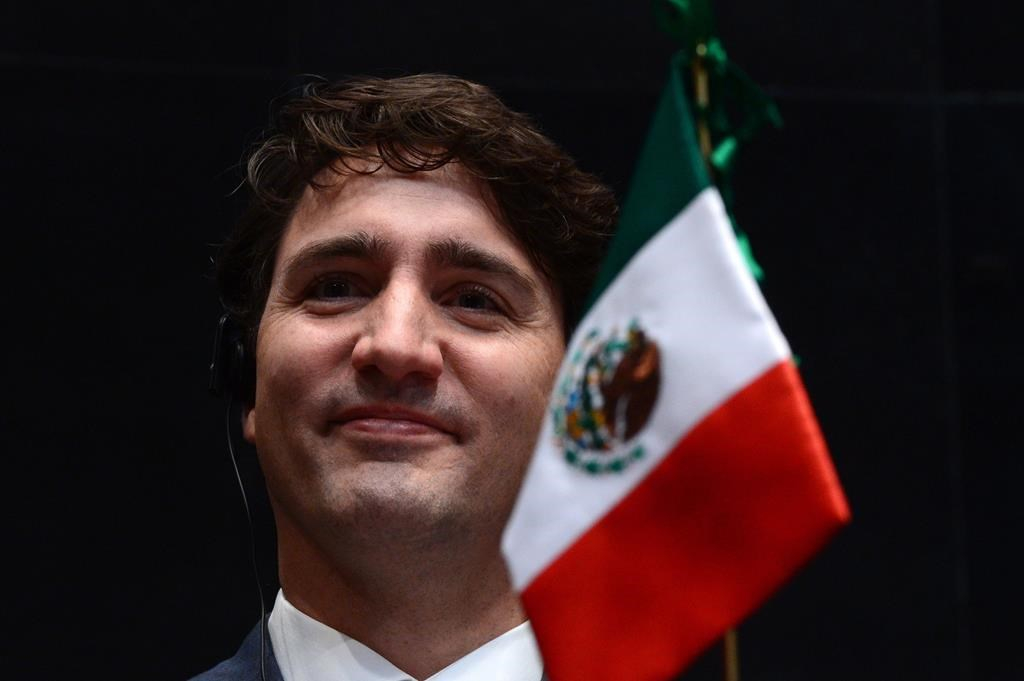 Justin Trudeau issued a progressive call to arms Friday, urging lawmakers in Mexico's most populous city to embrace and promote the rights of workers and women as an antidote to the creeping threat of isolationism that imperils trade and economic growth around the world.

His speech to the Mexican Senate capped a four-day trip that began in Washington, D.C., largely revolving around the ongoing talks to rewrite the decades-old North American Free Trade Agreement and bring it into the modern era.

Ensuring it is a deal that benefits all segments of society is essential, the prime minister said.

"Our challenge lies in ensuring that everyone benefits from economic growth. And we do that by pursuing an ambitious, progressive vision of what the future can — and should — look like."

Trudeau's first official visit to Mexico followed a two-day stop in Washington. In both cities, he sat down with political leaders as well as civil society groups active in promoting women's rights.

Putting the focus on making a new NAFTA "progressive" is in part a political strategy for the Liberals, who are looking to left-leaning Democrats in the U.S. Congress to help support the agreement in the face of a White House that seems bent on ripping it up.

In Mexico, it is aimed at bolstering Canada's standing among Mexican citizens so strong bilateral relations can continue once President Enrique Peña Nieto's term comes to an end next year.

At the NAFTA talks, Canada has introduced a proposal aimed at compelling Mexico to pay workers higher wages and do away with so-called "yellow" unions that represent employers rather than employees.

An exodus of jobs to Mexico, particularly in the auto sector, is a major concern of both Canada and the U.S., but business leaders in Mexico have argued that workers rights' and pay should be an internal issue for each country.

But Trudeau said Canada does have Mexico's support when it comes to introducing a gender chapter into the trade pact.

What that might look like remains under development; at a forum for business executives in Washington earlier this week, Trudeau noted that such a chapter could be "aspirational, it can be concrete."

Trudeau told the Mexican Senate he appreciates their support for the chapter, but at the same time, the groups he met in Mexico City told him stories about the unacceptable treatment of women and girls.

The name comes from the fact it was first introduced by the Reagan administration at a 1984 conference in the Mexican capital.

More broadly in Mexico, a crisis of women being killed on the basis of their gender prompted the Mexican government to put out a gender violence alert in 2015 for Mexico state, just outside Mexico City itself.

Last month, protests were held across the country when a woman was killed in another province after using a popular ride-sharing app.

"Violence against women and girls is prevalent in all facets of life, from the studios of Hollywood to the digital public squares, our halls of Parliament," said Trudeau, who acknowledged efforts in Mexico to achieve gender balance among elected officials.

Currently, about 37 per cent of Mexican senators are women, but next year's election will require that 50 per cent of the candidates be female.

"I challenge you," Trudeau told senators, "to use your position and power to strongly push for the rights of women and girls in Mexico and around the world."

He received a standing ovation for his remarks and cheers not just from the senators but from onlookers in the chamber.

The upcoming Mexican elections are one reason NAFTA negotiators are striving to get a deal done by year's end.

For now, Trudeau and Peña Nieto vowed at the close of their bilateral meetings Thursday to remaining at the bargaining table for NAFTA, despite hard line proposals from the U.S.

On Friday, Trudeau repeated the message.

"A strong North America can only come from a strong Mexico, a strong Canada, and a strong United States," he said.

"We are partners — all of us. And even in the face of unpredictability and change, we must remember that."

Trudeau turns attention to Mexico in midst of tensions over NAFTA

Stephen Harper offers a gloomy take on the state of international trade, NAFTA

Trudeau visits Washington, as the locals sound alarm bells about the president