Past mistakes, soul-searching feature in first BC Liberal debate 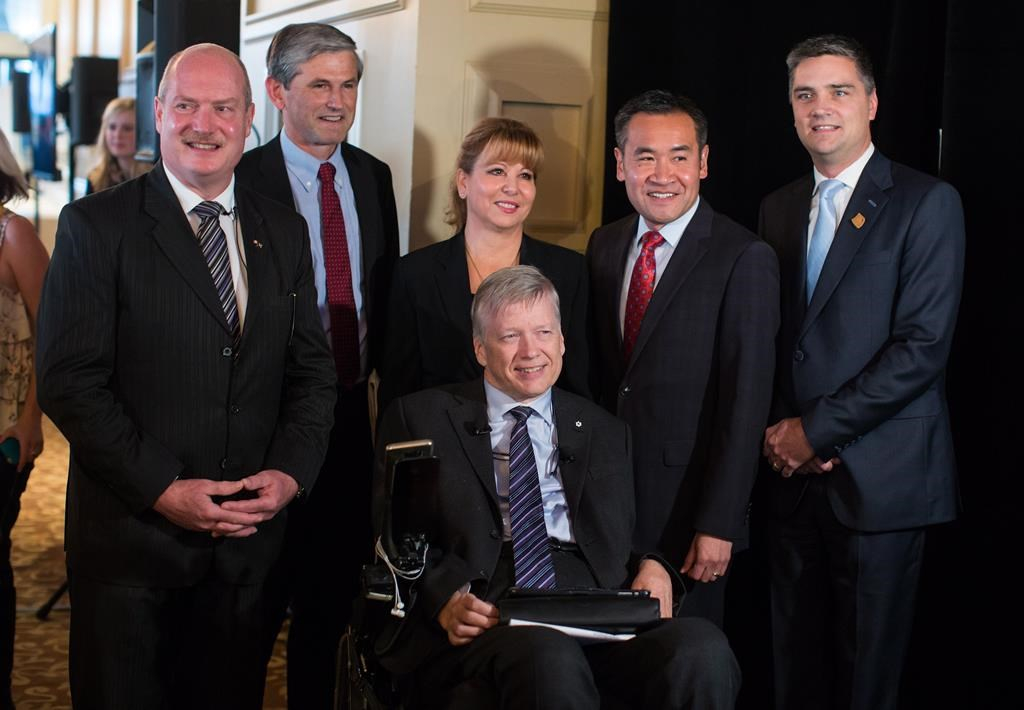 Six of the candidates running to lead British Columbia's Liberals laid out their ideas to rebuild the party Sunday in a debate that dwelled at times on what went wrong in last spring's election.

The field of candidates includes three members of Christy Clark's pre-election cabinet and two of them did some soul-searching on why the party lost seats and was eventually dumped from power in a confidence vote after 16 years in office.

Andrew Wilkinson said the party spent too much time talking about its wider economic success and didn't listen to voters who were feeling the pinch.

The province's minority NDP government will struggle to keeps its election promises to make life more affordable but there is an opportunity for the Liberals to capitalize on issues like the high cost of housing, he added.

"People are living with two income families from pay cheque to pay cheque. We've got to understand that and provide a better solution right here in the Lower Mainland."

Dianne Watts wasn't in Clark's cabinet, but she reiterated Wilkinson's argument, telling the party it needs to change.

"We lost that election because we stopped listening," said Watts, a former Surrey mayor who quit the House of Commons seat she held for the Conservative party to seek the leadership.

Former transportation minister Todd Stone said he launched his campaign in rapidly growing Surrey to acknowledge the quality of life issues of many voters in the Lower Mainland around Vancouver, and that means adding more child-care spaces, increasing spending on affordable housing and creating better transportation links that get people home quicker after work.

"In this last election we didn't get it all right. We didn't speak the language that resonated with enough folks in the Lower Mainland and their issues of affordability and housing, child care and transportation."

Former finance minister Mike de Jong has bore the brunt of much of the criticism since the election, facing arguments that his tight-fisted control of the province's purse strings meant programs aimed at easing financial pressures for people never made it off the drawing board, hurting the party in Metro Vancouver.

But de Jong was unapologetic.

"I have heard the criticism, that tightwad de Jong," he said. "I may be the only finance minister in living history, now former finance minister, whose criticism is rooted in the proposition that I was too careful with the taxpayers' dollars."

The NDP was left with a $2.7 billion surplus by the Liberals.

Lee said his children are in their early 20s but they don't have the same chances of economic success as his parents when they arrived in Vancouver from Hong Kong.

"We need to be smart with your money and we need to plan for the future," he said.

Sullivan said he has hope for the Liberals' future as he made his pitch to lead the party.

"You need someone to take bold moves to take decisive actions and to get the job done," he said.

A number of candidates panned the NDP's proposal to change the system used to elect members of the legislature by holding a referendum on proportional representation.

The Greens and NDP have supported a system of proportional representation that accounts for the number of seats each party gets in the legislature based on their percentage of their popular vote.

But Watts described the system as "destablizing" while Wilkinson said the NDP is threatening the "basis of our democracy" with proportional representation and changes to political fundraising laws.

Sunday's debate was the first of six the party will hold across the province before it elects a new leader in February.