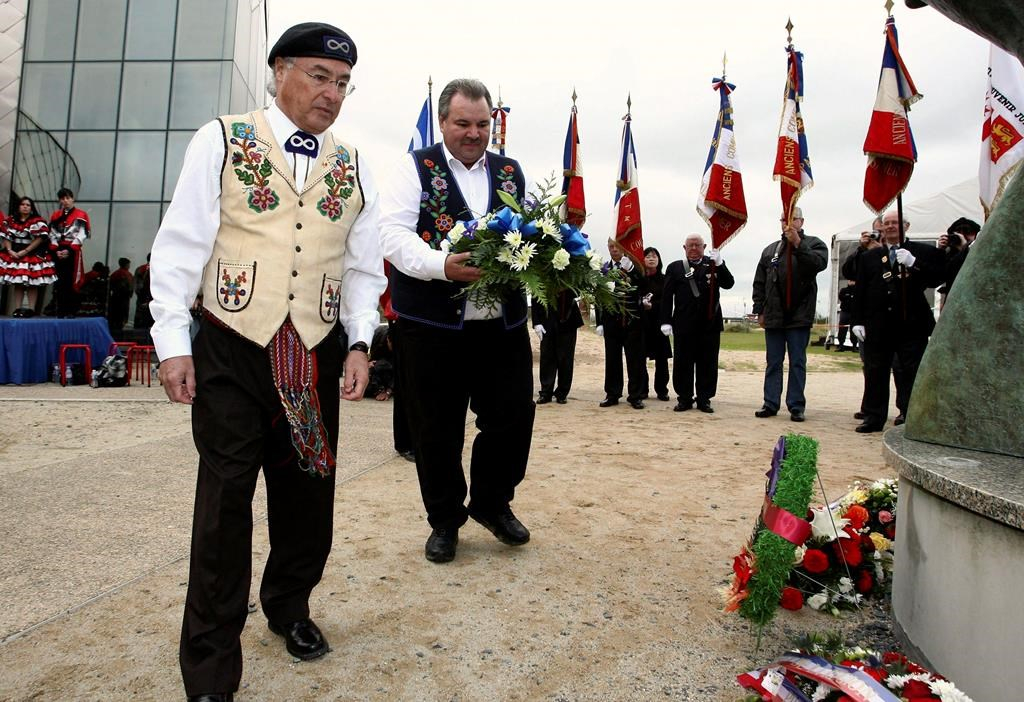 Canada's Clement Chartier and David Chartran lay a wreath at a monument during ceremonies to honors Métis veterans of WWII, at Juno Beach Centre in France. File photo by The Associted Press/David Vincent
Previous story
Next story

The president of the Métis National Council is urging the federal government to formally recognize the contribution of Métis veterans in the Second World War before it is too late for remaining survivors to find redress and get post-war benefits.

The timing is important because the ranks of surviving veterans are dwindling as the years go on, said Clement Chartier. Many who advocated on this issue over the last 30 years have already died.

"I think I know maybe three in Manitoba personally... that are still alive," he said in a recent interview.

Chartier, who is aware of a couple of survivors in both Saskatchewan and B.C. as well as another living in England, raised the matter directly in a March letter to Prime Minister Justin Trudeau.

"They made their sacrifices," his letter said. "Many made the ultimate sacrifice: their lives. Tragically, the country they served has not served them well."

All Second World War veterans except the Metis have been dealt with, he added, saying Métis Nation veterans have died while their campaign for a remedy was ignored or outright denied.

At the end of September, Veterans Affairs Minister Seamus O'Regan said he's heard directly about the need to address the recognition of Métis veterans and reconcile long-standing grievances over compensation. Ottawa will work with the Métis Nation to address concerns of discriminatory practices, O'Regan said in a statement.

"The scope of this work will include the service of World War II Metis veterans and will consider whatever information sources are available," he said. "The outcome we seek is to identify any discriminatory practices that may be discovered and to take concrete action, in the spirit of reconciliation, to address these findings."

Chartier said he is "hopeful" there is movement on the issue but he wonders how long it will take to right a historical wrong.

"Their families still want to see this resolved," Chartier said. "At least a process has begun... There's very few left."

In a statement late Monday, O'Regan said his department has been asked to work quickly to resolve claims.

"We want to ensure all Metis Veterans feel the honour and respect they so rightfully deserve," he said.