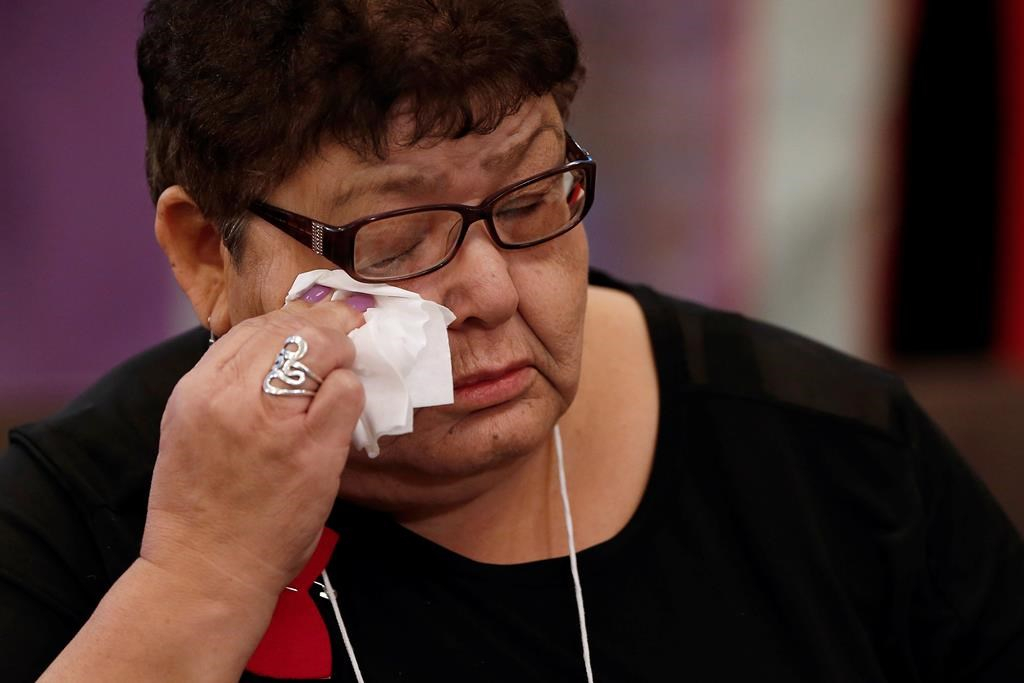 Joan Winning weeps as she speaks of her murdered niece Nicole Daniels to commissioner Michelle Audette at the opening day of hearings at the National Inquiry into MMIWG in Winnipeg, on Oct. 16, 2017. Photo by The Canadian Press
Previous story
Next story

Family members of missing and murdered Indigenous women sobbed, fought back tears and expressed anger Monday as they recounted what happened to their loved ones.

They also recalled running up against what they said was indifference from police and people in general.

"What was she to society — nothing?" Isabel Daniels asked the national inquiry into missing and murdered Indigenous women about her cousin, Nicole Daniels, who was found frozen to death in 2009.

"Like the 1,200 other aboriginal women that are murdered and missing?"

Nicole was 16 when she was found face down, with her clothes partially removed, behind a Winnipeg auto body shop on the morning of April 1, 2009. The night before, her family said the teen had gone out with an older man she had met on a telephone chat line.

An autopsy found a high level of alcohol in her system and the police ruled out foul play. They attributed the removed clothing to paradoxical undressing — a misplaced feeling of warmth that can occur when people suffer from severe hypothermia.

Her family told the inquiry hearing in Winnipeg they have no doubt Nicole Daniels was murdered.

Similar frustration came from Lorna Sinclair, whose sister, Myrna Letandre, was murdered in 2006. Letandre's killer, Traigo Andretti, was her boyfriend and was only charged after Letandre's remains were found in 2013 in a Winnipeg rooming house.

Andretti was questioned at the time of Letandre's disappearance but not charged — something that Sinclair said was wrong.

"More needs to be done when our people go missing, when our women go missing. You have to investigate the people they were with," she said.

"On three different occasions, I say to you all, I went to that house... and Traigo had said to us that he wouldn't let us in. He said, 'No, she's not here. She went to B.C., Calgary. I don't know where she is.'"

Andretti pleaded guilty in 2015 to second-degree murder. He had recently been given a life sentence for the murder of another Manitoba Indigenous woman, Jennifer McPherson, in 2013.

McPherson's murder was not the first for her family. Her mother, Betty Rourke, also lost a sister to violence in 1980. She fought back tears as she recalled memories of her sister as a young child.

Many family members told the hearing the violence has affected them. Some are scared to go out alone. Some are mistrustful of men. Some are haunted by the feeling they might have done something to keep their loved ones safe.

Monday's hearing was the first of four days scheduled for Winnipeg, following earlier hearings in Smithers, B.C., and Whitehorse.

The inquiry has faced complaints from some families about poor communication and delays. One commissioner and some staff members have resigned.

Kevin Hart, a regional vice-chief with the Assembly of First Nations, alluded to the controversy in his opening remarks.

"We know it hasn't been an easy job for you ... and I ask you from the bottom of my heart: please help the families and the survivors and the two-spirited because they need you more than ever right now."