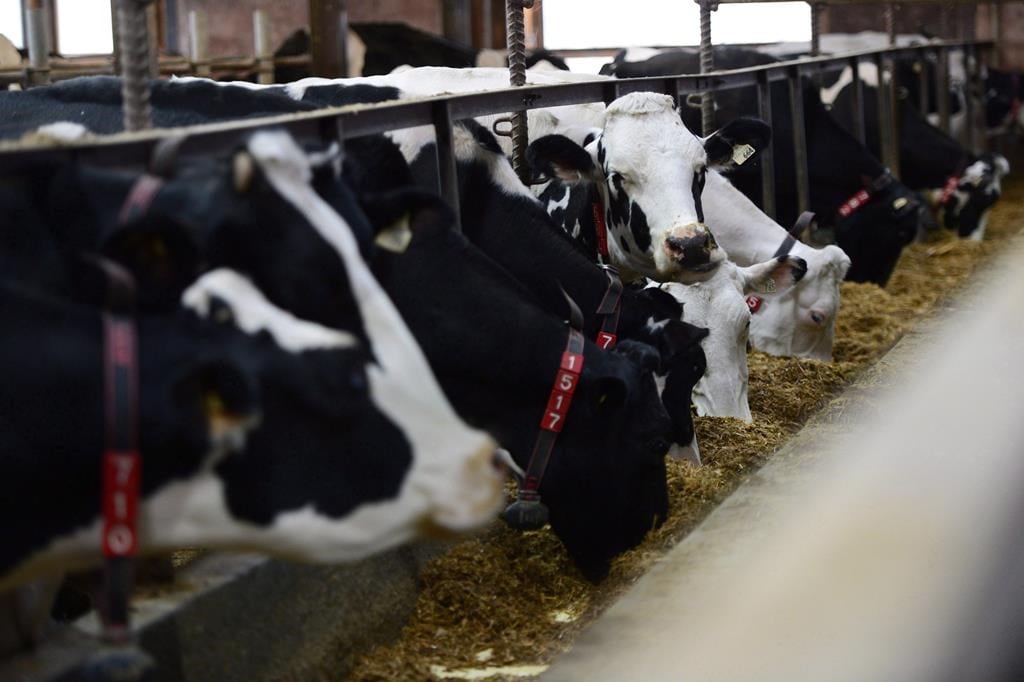 Dairy cows feed in a barn on a farm in Eastern Ontario on Wednesday, April 19, 2017. File photo by The Canadian Press/Sean Kilpatrick
Previous story
Next story

The United States has lit the fuse on one of Canada's most politically explosive trade issues, asking in NAFTA talks for an end to the supply management system for dairy, chicken, eggs and turkey within the next decade.

With that demand, the U.S. has now adopted a highly aggressive posture on virtually all the key issues expected to arise in the current NAFTA talks: it has asked to erect trade barriers in its own politically sensitive sectors, while eliminating them north of the border.

The latest demands come near the end of a week-long round where American negotiators dropped one bombshell demand after another, leading the other countries to question whether the U.S. goal is to actually reach a deal or to blow up NAFTA altogether.

Two sources tell The Canadian Press the request came on Sunday evening, catching some on the Canadian side off-guard, since they hadn't expected the highly contentious issue to arise during the current round.

One source says the supply-management request came with an initial phase-in period of five per cent more market access per year, leading to total duty-free, quota-free trade in protected supply-managed areas within 10 years.

That adds dairy, poultry, and eggs to a list of irritants that includes auto parts, textiles, trade-enforcement panels, Buy American rules for public works and a proposed five-year termination clause embedded in the agreement, with the countries holding not just different positions, but sitting on opposite sides of gaping ideological differences.

"Outrageous," said Pierre Lampron, president of the Dairy Farmers of Canada, of the latest proposal.

"It would be the end of supply management.... We are not surprised by the U.S. demands, they are in line with the demands they have made in other sectors."

The Canadian government, meanwhile, is calling the idea a non-starter.

Canada's system of protections was born from a 1960s effort to stabilize dairy prices, and was later emulated in other industries. It works by limiting imports and setting fixed prices.

The U.S. move was praised by the Montreal Economic Institute, a free-market think tank in Montreal, which urged Canadian policy-makers to seize the opportunity to dismantle a system that it says costs Canadian families an extra $339 a year in grocery bills.

"You can't on the one hand defend tariffs that sometimes reach 300 per cent for supply-managed products, then accuse the American government of being protectionist," said Alexandre Moreau, a policy analyst with the institute.

"That being said, the Canadian government should also make sure the Americans abolish their own dairy programs, and obviously offer fair compensation to farmers for their (supply-managed) quotas."

Defenders of the current system say eliminating it would create new problems — starting with the billions it would cost to buy out existing quotas. They say the status quo provides stability in rural communities, allows farms to survive without boom-bust cycles, and makes taxpayer bailouts unnecessary. The U.S., meanwhile, maintains numerous support programs to prop up its farmers, they note.

No major Canadian political party has ever opposed the system.

The federal Liberal government had said entering the talks it did not want to even discuss supply management, having promised to maintain the system. Agriculture Minister Lawrence MacAulay said Monday: "I've indicated quite clearly that our government is going to fight to make sure (supply management) stays in place. To deal with anything else is simply a non-starter."

The U.S. has now tabled a series of positions far outside the realm of what Canada says it's prepared to negotiate, prompting fears that a deal may be slipping out of reach.

Indeed, the prospect of a deal by year's end already seems impossible. With Mexico and the U.S. embroiled in national elections next year, the countries fear that a failure to get a deal by early next year will push the talks into 2019.

Pro-trade U.S. senator John McCain tweeted a Wall Street Journal editorial with the headline, "Trump's NAFTA threat: Ending the pact would be the worst economic blunder since Nixon," calling the editorial a "must-read."

The head of the World Trade Organization warned against increasing uncertainty in the global trading system. The U.S. is being accused of sabotaging the dispute panels at the international body, as it's seeking to gut them within NAFTA.

"I hope that (NAFTA) will not (end) because not only of the economic impact ... but also for the systemic implications," said WTO director-general Roberto Azevedo.

"It's very important to have these initiatives because they are the groundwork, they are the foundations of the WTO itself."

The U.S. has introduced aggressive demands in virtually every major NAFTA area:

—Auto parts. The U.S. wants all cars to comprise 50 per cent U.S. content to avoid a tariff. The U.S. has requested this policy be phased in within one year — which automakers call impossible.

—Dispute-resolution. The U.S. wants to gut the enforcement systems of NAFTA, making the panels for Chapter 11, 19 and 20 disputes either non-binding, or voluntary.

—Sunset clause. The U.S. has requested a termination clause that would end NAFTA after five years, unless all parties agree to extend the agreement.

—Dairy. The supply management request follows an earlier request for a de-facto veto over Canadian milk-classification decisions, which in the case of diafiltered cheese-making products has advantaged Canadian producers.

Canada's supply management a flashpoint in NAFTA talks: Here's why

U.S. dairy takes aim at Canadian supply management in round 3 of NAFTA