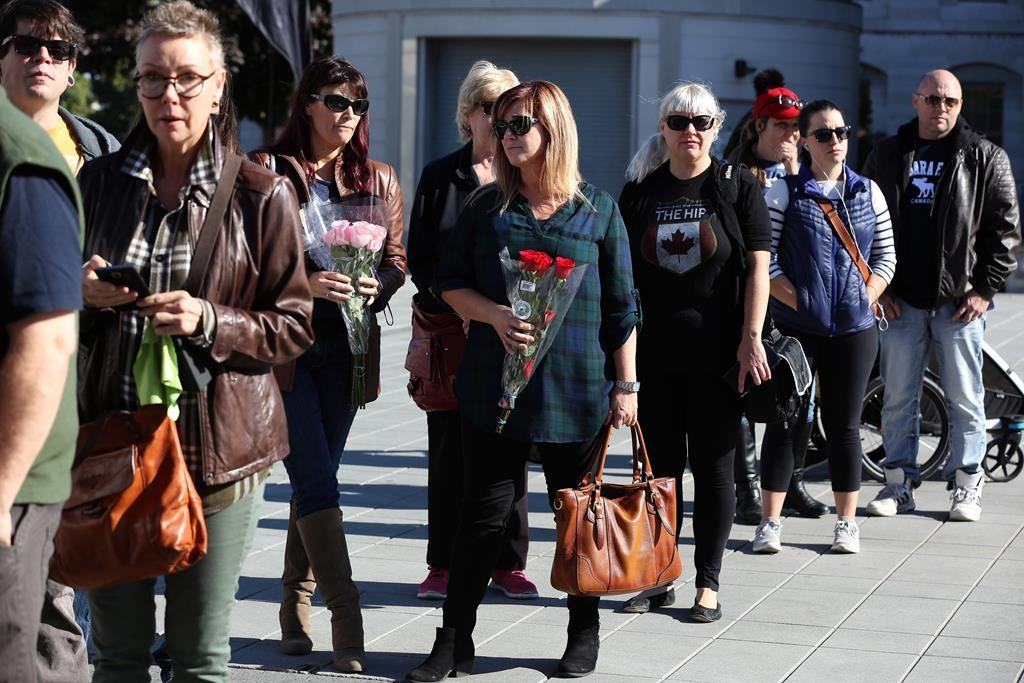 Fans line up to sign a book of condolence for the late Gord Downie, lead singer of the Tragically Hip, in Kingston, Ont., on Wednesday Oct., 18, 2017. Photo by The Canadian Press/Lars Hagberg
Previous story

The unmistakable voice of Gord Downie echoed through the streets of his hometown of Kingston, Ont., on Wednesday as locals celebrated the Tragically Hip frontman’s life and legacy.

Whether it was inside local pubs or at the city’s Springer Market Square, a steady rotation of the Hip’s songs raged against the heavy sadness in the air. Downie, who was diagnosed with incurable brain cancer, died Tuesday at 53.

"It was a moment we all knew was coming, we just didn’t know when," said Scott Hallman, who runs a hot dog stand in a local park.

"It’s like a pillar of the community has been taken away from us."

In Springer Market Square — where thousands gathered on Aug. 20, 2016, to watch a public screening of the band’s sold−out final concert — a collection of flowers and candles surrounded a commemorative stone for the band.

A few steps away, hundreds of people lined up throughout the day to sign a book of condolences.

Stan MacLachlan, a Toronto resident, decided to stop by the memorial to pay his respects while visiting his son at Queen’s University.

A candlelight vigil was planned for Wednesday evening.

Earlier, Kingston Mayor Bryan Paterson laid a wreath dedicated to Downie at city hall, which was to be illuminated in red and white in the evening to honour Downie.

"It’s tragic news and a sad day for Kingston," Paterson said in an interview.

"But you can’t help but think about all the memories, all of the amazing things that he and the rest of the band have done for this community. I often reflect on how it doesn’t matter what your musical tastes are, if you’re in Kingston, you’re a big fan of Gord and the Tragically Hip. They have done so much."

Paterson, 40, said the wreath ceremony was a chance to say thank you to Downie and convey how much he will be missed.

"(The band) was such a source of pride for Kingston that we would call ourselves the hometown of the Hip," said Paterson.

"Certainly the Hip is more than just a band here, they’re family. And so I think that’s what you’re seeing here today, you’re seeing family here in our city come together to support family and friends, to share memories of Gord."

— With files from Neil Davidson