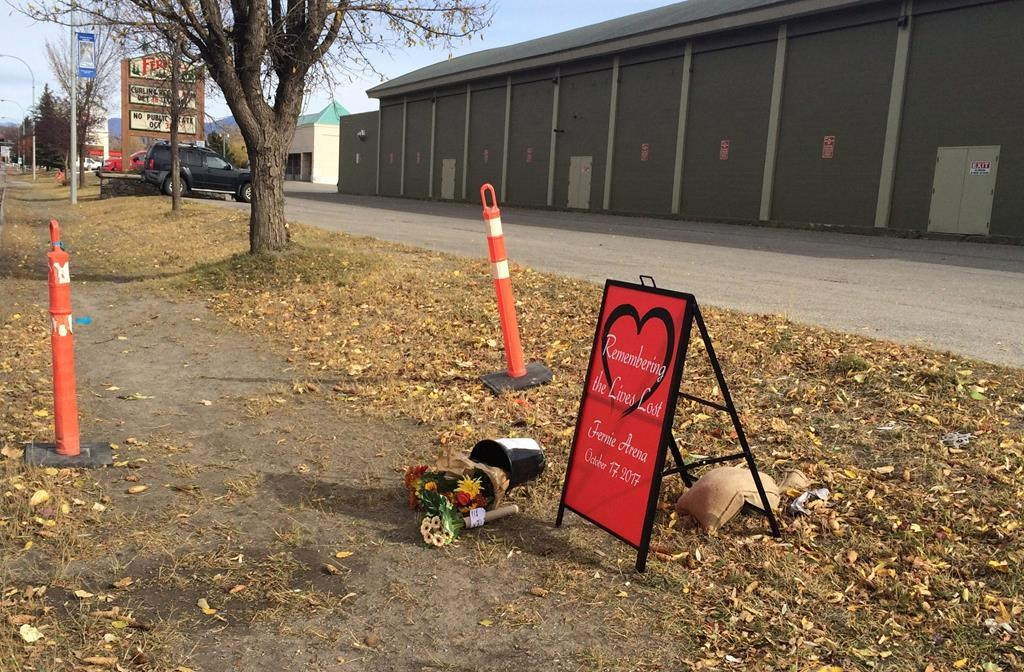 A memorial sign and flowers sits outside Fernie Memorial Arena in Fernie, B.C. on Wednesday, Oct. 18, 2017. Photo by The Canadian Press/Lauren Krugel
Previous story
Next story

A lifelong resident of a picturesque Rocky Mountain community says people have been shaken by the deaths of three workers following an ammonia leak at the local ice rink.

Twyla Sevinski recalled coming across a chaotic scene on Tuesday afternoon as a flurry of fire trucks and ambulances rushed to the arena in Fernie, B.C.

"There was a lot of fear around town," she said Wednesday.

"It's a lot to take in all at one time. I just hope that everybody can get through this."

RCMP confirmed Wednesday that three men died in what they are calling a "fatal workplace incident." Fire Chief Ted Ruiter said authorities got access to part of the Fernie Memorial Arena later on Wednesday and the scene remains an active police investigation.

Sevinski said her eight-year-old daughter loves to skate at the arena and that her 14-year-old son has spent many hours on the ice playing hockey.

"What if other people were in there when this happened? It could have impacted a lot more people — children. It's scary," she said.

Sevinski said the event has stirred up memories of another tragic event that shook the community nine years ago.

Her brother in law was one of eight snowmobilers killed in a series of avalanches in the rugged southeastern B.C. backcountry in December of 2008 and her cousin was one of the survivors.

"We've had some serious tragedies go on here and we just try and support each other to get through it," she said.

The city said two of the men who died were municipal employees while the parent company of CIMCO said the third man worked out of their Calgary branch.

Mayor Mary Giuliano said the men were doing maintenance work on refrigeration equipment at the time of the leak.

"Fernie is a tight-knit community and I know we'll pull together to support one another as we have in the past," Giuliano told a news conference.

Ruiter said crews responded shortly before 1 p.m. to reports of a leak of anhydrous ammonia at the arena and arrived to find someone performing CPR on a person.

Crews then entered the facility and found two other victims, he said. After performing an interior search, Ruiter said they had to leave the building for safety reasons.

A red sign with a black heart — the colours of the local Ghostriders Junior B hockey team — was set up outside the arena facing the main highway that passes through Fernie. On it in white letters was written: "Remembering the lives lost. Fernie Arena. October 17, 2017." Two flower bouquets lay nearby.

A block behind the arena, streets were cordoned off with police tape and barricades. About 60 people living near the Fernie Memorial Arena were asked to leave on Tuesday as a precautionary measure and were being provided with accommodations for a second night

Ammonia is commonly used in mechanical refrigeration systems, including those found in ice rinks. It is used in liquid form but becomes a gas once it is released into the air.

The Canadian Centre for Occupational Health and Safety says ammonia is a colourless gas that is toxic if inhaled.