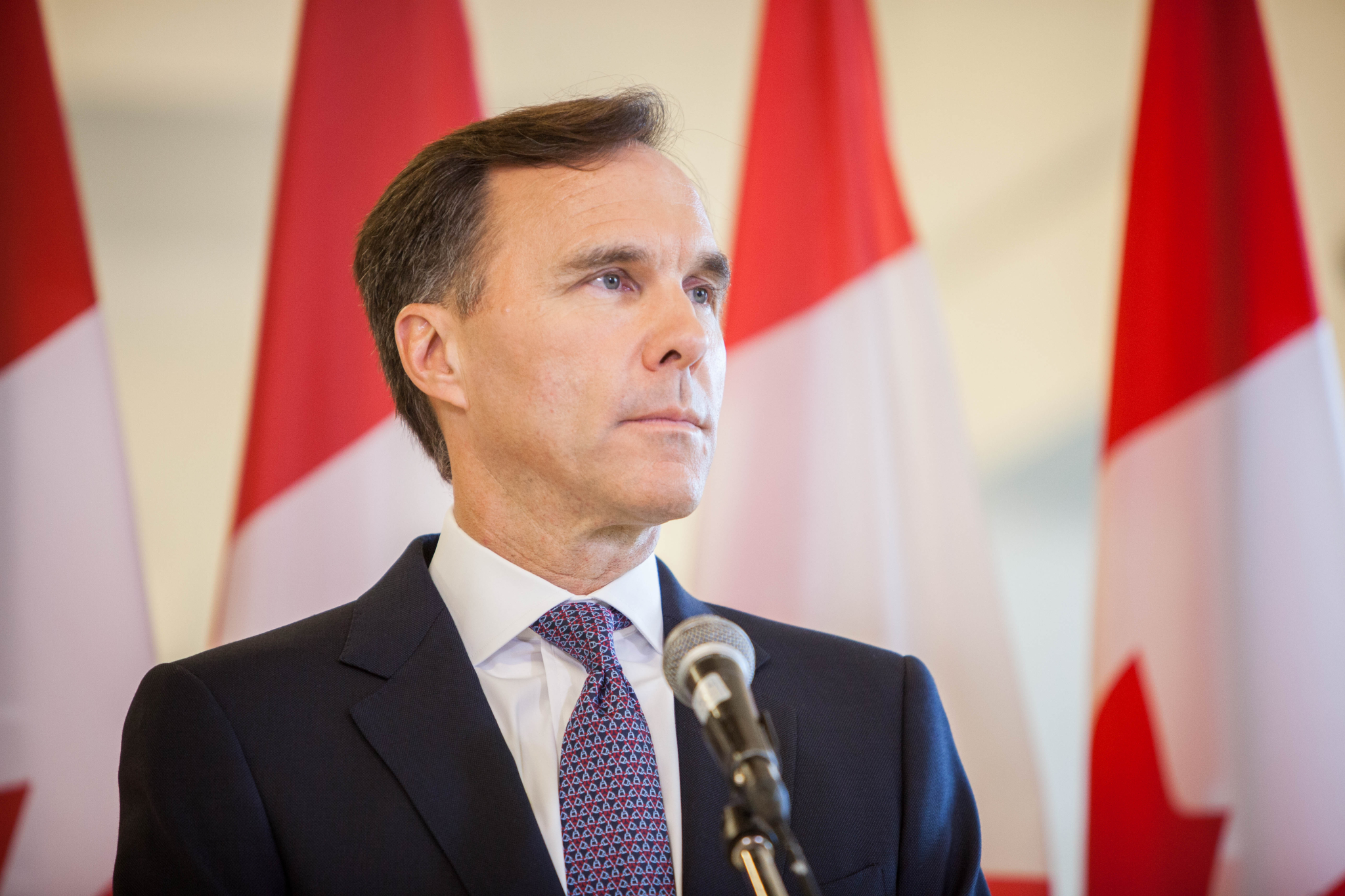 "Government is always about balance, and in our view the balance that we’re seeking is the ability to be fiscally responsible while making investments in the middle class and middle class families," he said Tuesday, emphasizing a tax rate reduction for small businesses, new spending on the Canada Child Benefit program, and the lowest level of debt "as a function of our economy" since the late 1970s.

"Back in 2015, we know both the Conservatives and NDP were focused on getting back to balance at all costs. We didn't see that as the appropriate anchor, what we said is being fiscally responsible means being responsible to Canadians, making sure they're actually feeling the benefits of growth," Morneau said.

"We're going to continue to be responsible. And our first responsibility is making sure that middle-class Canadians and people struggling to get into the middle class see the benefits of our growth."

The fall economic statement promised $14.9 billion in new spending over the next five years, in addition to what was promised in the federal government's March budget. The new spending takes advantage of an additional $46.6 billion now projected to come in over that five-year period.

The remaining funds will be aimed at reducing annual deficits, which are projected to shrink each year starting in 2018-19 — although a timeline for when the government plans to balance the federal books remains elusive.

The fiscal update shows a Canadian economy that is less reliant on oil than observers feared five years ago, as global oil prices stay flat.

Meanwhile, Canada is seeing growth in the export of "non-oil goods," and the federal government expects that to continue to grow in line with growing demand from the United States.

Morneau was asked Tuesday how threats to the North American Free Trade Agreement could put the government's fiscal forecasts at risk.

"When we look at the forecasts, of course there’s upside and downside risks in those forecasts. There’s the possibility that we’ll do better, that the continuing investments that we’ll make in Canadian families will enable us to do even better than we’ve forecast. There’s obviously other risks that we’re trying to manage," Morneau told reporters.

"So we’re working hard with our U.S. and Mexican partners to make sure that we get to a good outcome in our NAFTA discussions. And you know, we’ll continue to do so."

Morneau announced Tuesday that the government will introduce an enhancement to child-benefit payments so they start rising with the cost of living two years earlier than initially promised — at a cost to government of $5.6 billion over five years. He will also bolster the working income tax benefit, a refundable credit aimed at providing relief for low-income Canadians who have jobs while encouraging those who don't to join the workforce. The measure is projected to lower government revenues by $2.1 billion over five years, starting in 2018.

Tuesday's fiscal statement also included updates on the Pan-Canadian Framework on Clean Growth and Climate Change. The Liberals say they will release more details this fall regarding their $1.4-billion clean technology financing program, meant to "accelerate the growth of promising clean technology firms." They also plan to launch a $600 million "low carbon challenge" to support projects led by provinces, territories, municipalities, Indigenous governments, and other non-government and business organizations. And, they are still "considering comments" on a carbon levy system.

As it hits the mid-mandate mark, the Liberal government is in far better fiscal shape than it was in its March budget.

The economy has seen an average annualized growth rate of about 3.7 per cent over the last four quarters, which more than doubles the Bank of Canada's estimate for that period. The government's survey of private-sector economists predicts growth of 3.1 per cent this year, 2.1 per cent next year and 1.6 per cent in 2019.

The government is now expecting to run a shortfall of $18.4 billion in 2017-18, compared with a projection of $25.5 billion outlined in the last budget.

— With files from Andy Blatchford, The Canadian Press

Finance minister followed the law, has done nothing wrong: Trudeau

Mr. Morneau, very wealthy himself, capitulated to rich opponents of the Liberals' modest reforms. A gutting ensued.
There's nothing either surprising or estimable about that.