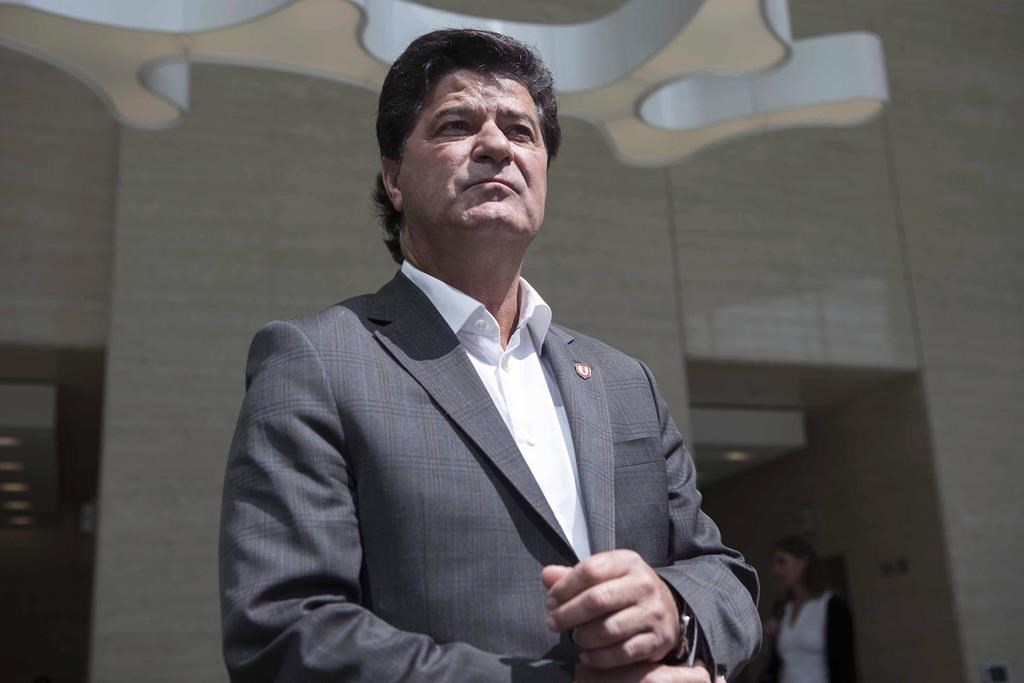 Unifor President Jerry Dias makes his way to speak to the press in Toronto on Friday, August 25, 2017. File photo by The Canadian Press/Chris Young
Previous story
Next story

Just hours before Bombardier Inc. was to unveil a dramatic plan to escape its latest crisis, Jerry Dias was summoned to Montreal to meet with Alain Bellemare, the beleaguered firm's chief executive.

There, the head of Canada's largest private-sector union was told that after months of searching for partners to help finance its sleek new C Series jet, Bombardier would be teaming up with European manufacturer Airbus, which would take on much of the responsibility for building and selling the aircraft.

The deal would give Bombardier a way around the sky-high U.S. tariff prompted by a complaint from American rival Boeing. But it also put Dias — president of Unifor, a union that represents more than 315,000 Canadian workers, many of them at both companies — in a tight spot.

Dias, 59, wasn't thrilled. But to his mind, Bellemare had little choice.

"If I'm faced with a similar situation, where it's life or death, I'm choosing life," Dias said in a recent interview.

A Bombardier spokesman characterized their meeting as giving a heads-up to a trusted stakeholder. But Dias said his pragmatic conclusion likely came as a relief to Bellemare. After all, there was nothing stopping Dias from trashing the deal to anyone who would listen.

"He's a pretty straight shooter," said Peggy Nash, a former New Democrat MP who worked with Dias in the 1980s at the Canadian Auto Workers union, which merged with the Communications, Energy and Paperworkers Union of Canada to form Unifor in 2012.

"If you're looking for somebody that filters out a lot of what he's thinking, that's not Jerry."

Dias said he knew something big was on the horizon. A former aerospace worker himself, he knew Boeing's anti-subsidy complaint to the U.S. Commerce Department had left the Montreal company between a rock and a hard place.

Sooner or later, it would have to do something drastic to wriggle free.

"There was no way that Bombardier was going to go under," said Dias, likening the prospect to the Avro Arrow, an advanced Canadian fighter jet that was scrapped in 1959. An expedition team recently found a prototype on the bottom of Lake Ontario.

"There was no way that Trudeau was going to put the C Series into Lake Ontario. No chance. None."

Dias talks to the people around him often enough, and with enough confidence, to know where the prime minister and his cabinet stands on a number of issues of major importance to the Liberal government.

"There's a lot in play right now and I'm glad to be in the middle of it."

That includes the negotiations of the new North American Free Trade Agreement, where Dias has been at every round and is trusted with many of the details.

"We talk to him all the time," says a senior government source who interacts regularly with Dias.

The source, who spoke on condition of anonymity since they were not authorized to speak publicly, said the Liberal government reached out to Dias on trade early on and has kept him in the loop ever since — although they don't agree on everything and don't speak for each other.

"I'm not invited to participate with the Canadian team in NAFTA to shut up," Dias said. "I mean, they know who I am."

At the same time, Dias knows he has a different relationship with this government than he did with the Conservatives under former prime minister Stephen Harper, who he describes as having viewed the labour movement as an enemy.

"Justin Trudeau and the Liberal government view us as a stakeholder — a legitimate stakeholder with a voice."

Unifor, Dias noted, is one of the most politically active labour organizations in the country, including when it comes to third-party election spending, and represents workers in more than 20 economic sectors.

"They're viewing us as a group that has a heck of a lot to add."

Like the CAW before it, Unifor urged its members to vote strategically against the Conservatives in the 2015 federal election, rather than endorsing the New Democrats, the traditional allies of the labour movement, said Christo Aivalis, who researches Canadian labour history.

"It underpins their political strategy of, 'We can find friends in any party except the Conservative party,'" says Aivalis, a post-doctoral fellow with the department of history at the University of Toronto.

Lisa Kelly, director of the women's department at Unifor, said Dias has a talent for understanding where power lies around him.

"Anyone who knows Jerry knows that he thinks the rules do not apply to him — and nor should they," said Kelly, because those rules were not written with the best interests of working people in mind.

Dias is quick to point out the NDP have never formed federal government, but he also recognizes the Liberals can credit at least some of their success in the 2015 election to having shifted to the left.

"They have done a lot of things that I will argue they took right out of the NDP play book," he said. "For me, it's not a question of who does it. I just want it done."