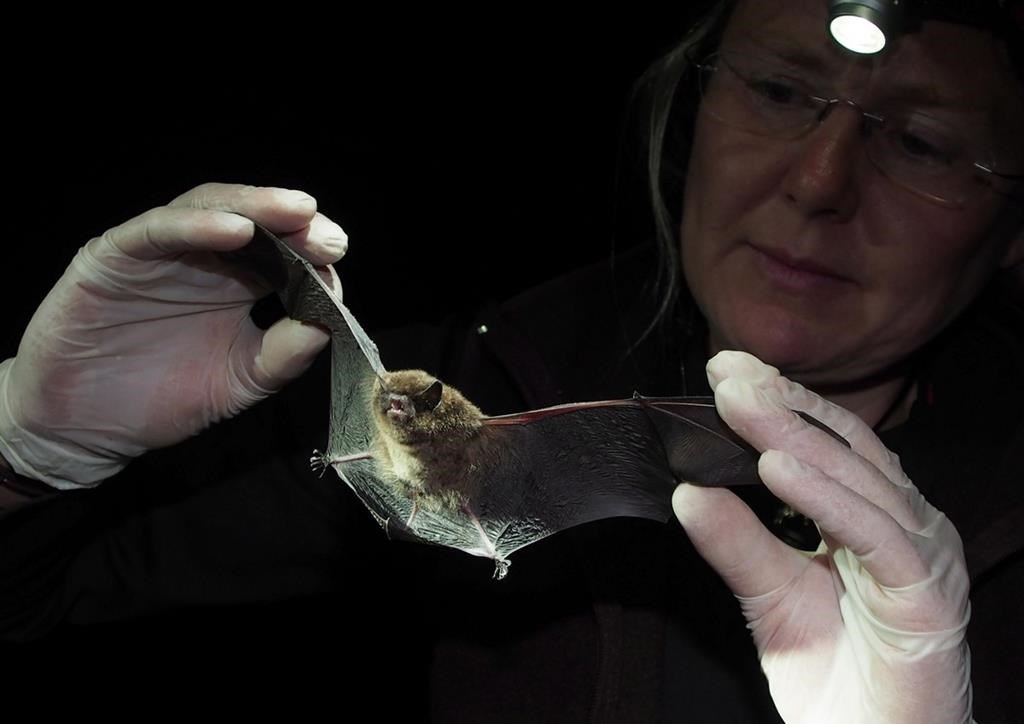 Canadian scientists are racing to test a remedy that they hope will save bats from a deadly fungus that has already killed millions of the winged mammals across the continent.

"We are feeling a real sense of urgency because that fungus is within a couple hundred kilometres of Vancouver," said Cori Lausen, a biologist with the Wildlife Conservation Society Canada. "It's very likely that that disease will show up there this spring."

White Nose Syndrome, already found in 31 states and five Canadian provinces, kills hibernating bats by forcing them to wake up and use energy grooming the fungus off their bodies.

"Bats only have so much stored fat," said Lausen. "Many of them will die over the winter simply from starvation."

Those that don't, she said, often don't last much longer. The fungus eats holes in their wings.

Previous attempts to fight the fungus are based on what Lausen calls "S.O.B. — spray on bats." Find where the bats are hibernating and spray them with some sort of fungicide, either chemical or naturally derived.

That method depends on knowing where the bats hibernate. It also introduces substances into delicate cave ecosystems that might have unanticipated effects.

Nor has it stopped White Nose's spread. Although the disease has not yet appeared in Canada west of Manitoba, it was found last year just south of Vancouver near Seattle.

"It became clear to me that we had to do something different in the west," Lausen said. "If we can focus on something we can do to prepare the bats to fight off the fungus, then that's where we would like to put our energy."

While bat hibernation sites in the west are mostly unknown, scientists do know where to find them in summer — hanging in buildings or in large maternity roosts raising their young.

Lausen and her colleagues have developed a powder that contains probiotics — bacteria found naturally on bat wings that fight the fungus. That powder will be spread on entrances to bat roosts in hopes it spreads on their bodies.

"(The bacteria) are already on their wings," Lausen said. "We're just trying to increase the density of these good bacteria and fungi.

"The theory is that these bats will go off to hibernation having spent their summer going in and out and picking up this probiotic — very much like us eating yogurt. They'll arrive at their hibernation site with wing microbes that are going to keep that fungus from growing."

The group has swabbed 14 different bacteria off bat wings that look like they'll work.

"We have proof in a petri dish."

Next, scientists have to figure out which combinations of bacteria will be best. Then they have to mass-produce it into a powder that can be tested next spring.

Lausen said the hope is to have the powder in Vancouver bat roosts by the summer.

"It's all moving very quickly."

Losing bats means losing a major predator of insect pests such as mosquitoes. The little brown bat, common throughout North America, can eat its body weight in bugs every night.

That not only keeps backyards and gardens more pleasant, it reduces the need for chemical pesticides, Lausen said.

"A lot of pesticide use is happening in the East where White Nose has hit harder. Insect abundance goes up when natural predators go down.

"And bats are the primary predator of insects in the night sky."

Thousands of human-wildlife conflicts reported across B.C. in 2017