Morneau Shepell defends its dealings with Ottawa amid minister's controversy 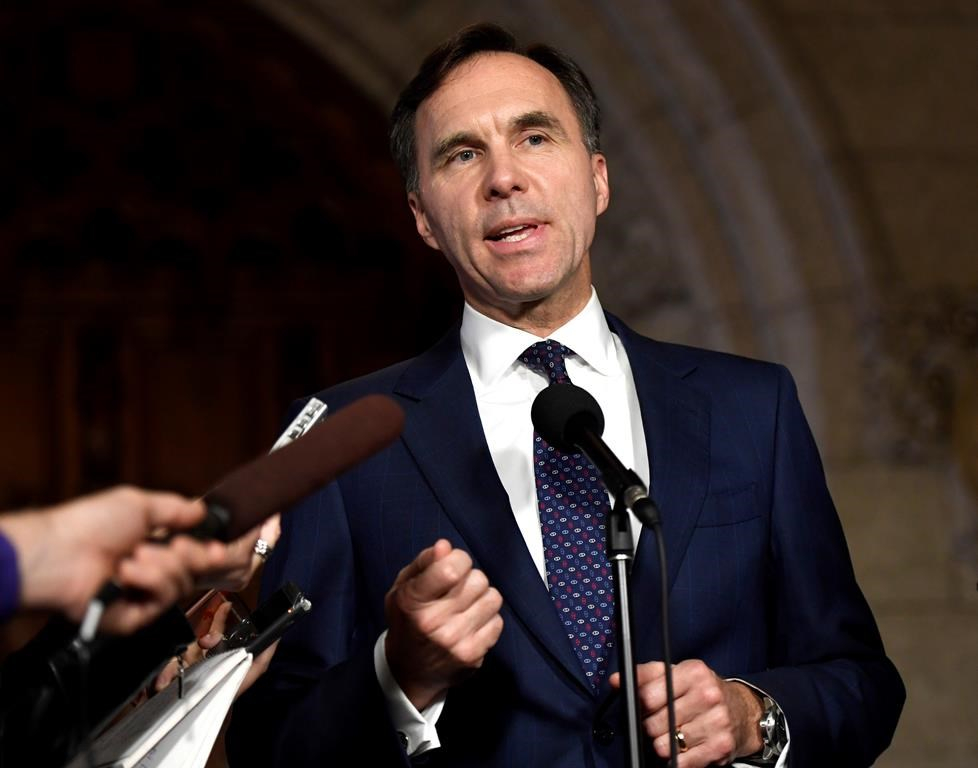 Minister of Finance Bill Morneau speaks to reporters in the Foyer of the House of Commons on Parliament Hill following Question Period, in Ottawa on Thursday, Oct. 26, 2017. File photo by The Canadian Press/Justin Tang
Previous story
Next story

The human resources and pension management firm at the centre of the conflict-of-interest controversy raging around Finance Minister Bill Morneau broke its silence with a flourish Friday, denying strenuously any suggestion that it has benefited from having its former boss in cabinet.

Opposition critics have been attacking Morneau over his links to Toronto-based Morneau Shepell, urging the federal ethics watchdog to investigate the fact that minister spearheaded pension reform legislation that could benefit both the company and the man who used to run it.

However, the only thing Morneau shares with Morneau Shepell these days is a name, the company said in a statement aimed at countering "a growing amount of misinformation" about the firm and its contracts with the federal government.

"Morneau Shepell severed all contact with Finance Minister Bill Morneau upon his election to the House of Commons in October 2015; this includes any discussions about his financial investments," the statement said.

"Morneau Shepell wins business because we are good at what we do. We stand behind our success in the open, transparent, competitive process for government contracts."

Nor was the company ever consulted about Bill C-27, the legislation introduced by Morneau that now has ethics commissioner Mary Dawson — who signed off on the minister's decision to forgo a blind trust for his considerable assets — double-checking for signs of conflict.

The firm acknowledged Friday that it has expressed its support for the concepts in the proposed legislation, but it doesn't expect a windfall if the legislation becomes law.

"Bill C-27 is not expected to have a material impact on our company," the statement said.

"If passed, it would allow federally regulated pension plans the option to implement target benefit pension plans. They would not be required to do so."

The statement refutes media reports that suggest Morneau Shepell obtained and renewed contracts with the federal government after the Liberals came to office. All contracts were awarded fairly and competitively, and "nearly all" of them were awarded when the Conservatives were in power, the company said.

It ends with this: "While we understand that we cannot always control the context of how our name is referenced, we will defend our reputation, our employees and our clients."

Morneau, who built the company alongside his father into a large, successful firm, stepped down as executive chairman shortly after the 2015 election and before he was named finance minister a couple of weeks later.

He has denied he was in conflict of interest regarding Bill C-27, although Dawson is looking into the situation following a complaint last week from NDP ethics critic Nathan Cullen.

"Your letter leaves me with concerns in relation to Mr. Morneau's involvement with Bill C-27," Dawson wrote. "Consequently, I will follow up with Mr. Morneau and will inform you of the outcome in due course."

Morneau announced last week that he will sell all of his roughly one million shares in Morneau Shepell — holdings worth at least $21 million, according to current stock prices — and put all his other considerable assets in a blind trust.

On Thursday, following continuing opposition accusations that his actions as minister could have increased the value of those shares, he went a step further, saying he will donate to charity the difference in the value of the shares between the date he was elected in 2015 and the day they're sold.

Conservative MP Gerard Deltell called Thursday's news "proof, without a shadow of a doubt, that he was in a pure, profitable conflict of interest for the last two years and he only acted when he's trapped in a corner."

Morneau introduced C-27 just over a year ago and it has sat on the Commons order paper ever since, with no debate and no attempt by the government to move it along.

Bill Morneau to sit down with ethics watchdog to reassure Canadians