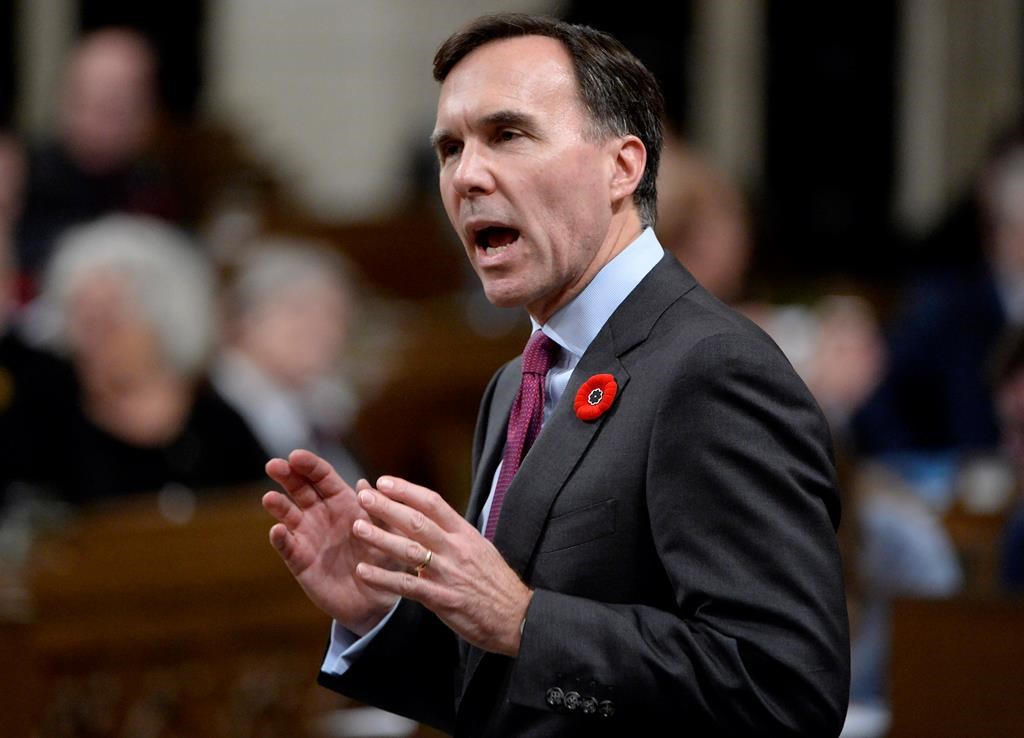 Bill Morneau suggested Tuesday that it was their own personal financial interests that motivated Conservative MPs to oppose reforms aimed at ending tax advantages for wealthy owners of private corporations.

The federal finance minister levelled the charge as the Liberals attempted to turn the tables on the Conservatives, who continued to accuse Morneau of conflict of interest over to his decision not to put his own considerable assets in a blind trust.

Since the furor over his personal fortune arose two weeks ago, Morneau has promised to sell his shares in his family human resources and pension management company, Morneau Shepell, and donate to charity any gains in the value of those shares since taking office in 2015. He has also promised to place all his other assets in a blind trust.

But the Conservatives have not let up on the issue. On Tuesday, they hammered away at the six numbered companies owned by Morneau, demanding to know precisely what assets they hold.

Morneau countered with the fact that 21 Conservative MPs are themselves owners of private numbered corporations.

"We also know that the members on the other side of the House argued vociferously against the changes that we wanted to make to make sure our tax system was fair," he told the House of Commons.

"Therefore, while we were working on behalf of Canadians ... they were focused on the advantages that 1.7 per cent of those privately incorporated individuals might have. While they protect their interests, we will protect the interests of Canadians."

"I can do this bingo game too," Morneau said.

Conservative finance critic Pierre Poilievre retorted that not one of those 21 Tory MPs "owns stocks in a company that he or she regulates. Only the finance minister has that distinction."

Morneau owns some $21 million worth of shares in Morneau Shepell. Those shares are held by a numbered Calgary-based holding company, which is majority owned by an Ontario numbered company of which Morneau is the sole owner.

He jointly owns four other numbered real estate holding companies with his siblings, all of which are involved in condominiums in Florida.

Because the Morneau Shepell shares are not held directly by Morneau, federal ethics commissioner Mary Dawson advised him in 2015 that he did not need to divest them or put them in a blind trust. Rather, she recommended that he set up a conflict of interest screen to ensure he was not involved in any discussion or decision that could benefit Morneau Shepell.

Morneau followed Dawson's advice but opposition parties have accused him of conflict of interest since he, as finance minister, regulates the pension industry. They have zeroed in specifically on a bill Morneau introduced a year ago that would allow pension administrators to convert direct benefit pension plans into targeted benefit pension plans — a change for which Morneau Shepell had lobbied.

The bill has languished on the order paper since its introduction. Nevertheless, in response to an NDP complaint, Dawson last week said she has some concerns about Morneau's involvement with the bill and intends to look into the matter.

In the Commons on Tuesday, Prime Minister Justin Trudeau continued to reiterate that Morneau followed Dawson's advice to the letter in dealing with his assets. And he said ministers in the former Conservative government arranged their personal finances in a similar way to avoid conflicts of interests.

Trudeau attempted to draw Conservative Leader Andrew Scheer's finances into the debate, saying he's "absolutely certain" that Scheer "also followed the advice of the conflict of interest and ethics commissioners in accordance to his own personal tax dispositions."

That appeared to be an oblique allusion to the fact that Scheer has an ownership stake in three real estate limited partnerships (RELPs), which can be used as tax shelters. One Liberal MP, Raj Grewal, told the CBC that it's "the height of hypocrisy" for Conservatives to hammer Morneau when Scheer himself "holds investments that are designed to take advantage of the tax system."

Scheer dismissed that as "a baseless accusation." He said RELP investments are open to anyone earning $75,000 a year and, in any event, the Liberals only knew about his investments because he'd disclosed them to the ethics commissioner — something he accused Morneau of failing to do.

Earlier this month, Morneau admitted that he had disclosed his ownership of a villa in France but, due to an administrative oversight, had not told Dawson that the villa was owned through a numbered company.

"The point is that there's information that he has withheld from Canadians," Scheer said outside the Commons, adding that Morneau had also led people to believe he'd put his Morneau Shepell shares in a blind trust.

That's why the Conservatives are demanding to know precisely what other assets are held by the minister's numbered companies, Scheer said.

"We are left to take his word for it but, as we've seen, he has failed to disclose other things. So we're asking why can't he just come clean?"

Scheer had his own moment of embarrassment Tuesday associated with Morneau Shepell.

An online notice of a speech Scheer is to give to the Canadian Club of Toronto on Nov. 30 listed Morneau Shepell as a sponsor of the event. The company disappeared from the list of sponsors later in the day.

Jake Enright, a spokesman for Scheer, said the Conservative leader's office was not aware that Morneau Shepell was sponsoring the speech.

"When we learned that that firm was sponsoring the event, we spoke to the host and told them that it would be inappropriate for Mr. Scheer to attend an event sponsored by the firm, given the current context," Enright said.

Dawson vs Morneau: if the laws aren't enough, who should take the next step?

Morneau Shepell defends its dealings with Ottawa amid minister's controversy