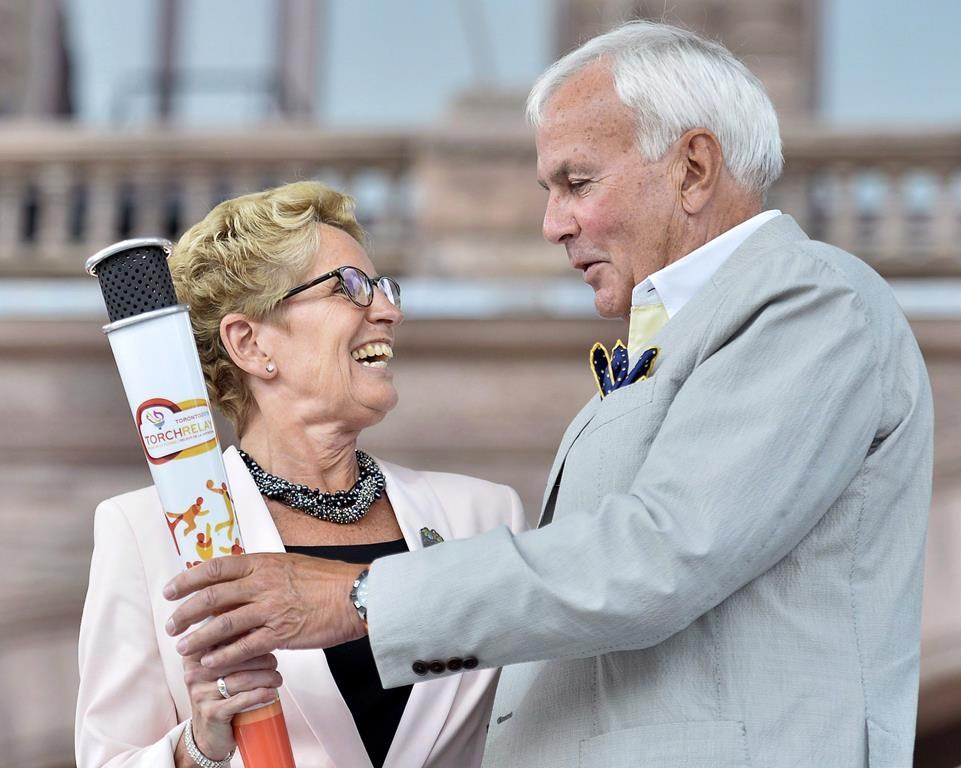 Kathleen Wynne receives an honourary Pan Am Games torch from David Peterson, chair of the board that is organizing the Toronto 2015 Pan Am/Parapan Am Games during a ceremony at Queen's Park in Toronto, on July 9, 2015. File photo by The Canadian Press
Previous story
Next story

A sexual harassment lawsuit against former Ontario premier David Peterson has been dismissed, his lawyers said Tuesday, noting that the woman who launched the legal action had apologized for doing so.

The lawsuit was brought in 2015 by a former Toronto Pan Am Games manager, Ximena Morris, and initially sought $10 million in damages, and was later amended to $3 million in damages. It alleged a history of flirtatious remarks from Peterson — who was chair of the board for the Games — that escalated into unwanted hugs, sexually tinged remarks and public humiliation.

Peterson had denied the allegations, calling them "wild and untrue."

In a statement issued Tuesday, his lawyers said the lawsuit had been dismissed by Ontario Superior Court and Morris had apologized to Peterson and his wife. The court order does not award costs to either party.

"David Peterson is a public figure who has contributed enormously to the service of the people of Ontario, both as premier and through continued volunteering activities, including chairing the Pan Am games," Peterson's lawyer Lisa Talbot said in the statement.

"We have maintained from the beginning that this lawsuit was completely without merit. Sexual harassment is intolerable. This was never that case."

Morris had also named the Pan and Parapan Am Games organizing committee, the Canadian Olympic Committee (a partner of the Games) and three members of the executive team at TO2015 in the suit.

Peterson, who was premier from 1985 to 1990, was instrumental in helping Toronto win the bid to host the 2015 Pan and Parapan Am Games and had served as chair of the board since September 2013.

Ontario deputy premier Deb Matthews, who is Peterson's sister-in-law, said she has spoken to the former premier.

"We're all very happy to see a resolution of this issue complete with an apology," she said.

Peterson's lawyers had complained that the suit was lingering in the courts and Matthews acknowledged it was a long and difficult process.

"It's been tough, for sure," she said. "But David felt very strongly that an unfounded allegation should not go unchallenged."