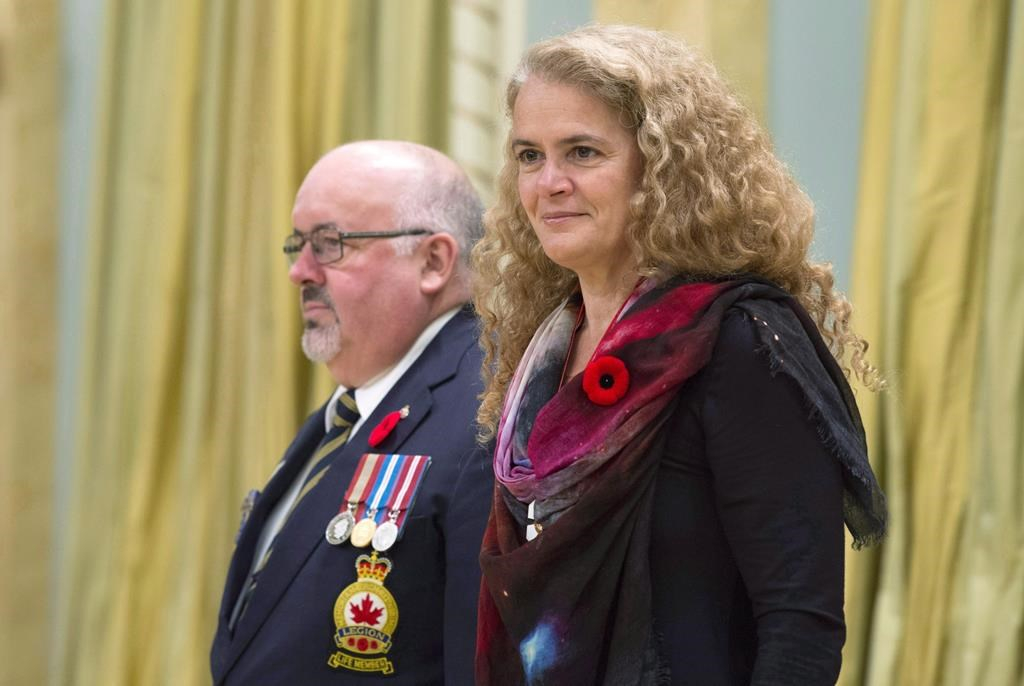 Julie Payette stands with the Dominion President of the Royal Canadian Legion Davi Flannigan after receiving the first poppy for the National Poppy campaign during a ceremony at Rideau Hall, on Oct. 23, 2017. File photo by The Canadian Press/Adrian Wyld
Previous story
Next story

According to popular Canadian astrologer Georgia Nicols, Canada's Governor General should be doing what she can to "keep the peace" with loved ones today and avoid the "planetary vibe" that is urging people to engage in power struggles and disputes.

The advice, contained in Julie Payette's Nov. 2 horoscope on Nicols' website, might have come a day late, though Payette likely wouldn't have listened to it anyway.

The Governor General made clear in a speech to scientists at an Ottawa convention Wednesday she has a very low opinion of the validity of horoscopes, people who believe in creationism or those who don't believe in climate change.

"So many people ... still believe, want to believe that maybe taking a sugar pill will cure cancer if you will it good enough and that your future and every single one of the people here's personalities can be determined by looking at planets coming in front of invented constellations," she said, to the delight of many scientists and researchers in the room.

Emmett Macfarlane, a political professor at the University of Waterloo said nothing stops a governor general from stating opinions and while there have been unwritten traditions against it, Payette's most recent predecessors did not always hold their tongues.

Michaelle Jean, who was the governor general from 2005 to 2010, waded into a number of political issues including Quebec sovereignty and Canada's military mission in Afghanistan. She was against the former and in favour of the latter.

More recently, David Johnston criticized the military for taking a "stiff upper lip" approach to mental illness among soldiers and not doing enough to support to members of the military dealing with post-traumatic stress disorder.

Conservative political strategist Alise Mills said Payette went way over the line with her speech, which she characterized as not only political but "mean-spirited."

"I definitely agree science is key but I think there is a better way to do that without making fun of other people," Mills said.

There isn't a lot of data on horoscope and astrology beliefs in Canada but a 2005 Gallup poll suggested around one in four Canadians believed in astrology.

Horoscopes are still published daily in most major Canadian newspapers including the two national papers, and there are hundreds of online sites and services, some of which make big money. Astrology Zone, one of the most popular online sites, exceeds six million visitors a month.

Newman University in Manchester, U.K., this fall released a survey that showed about one in seven Canadians believe in creationism.

Prime Minister Justin Trudeau didn't seem to have any issue with what Payette said, saying his government and Canadians understand the value of science.

"I applaud the firmness with which she stands in support of science and the truth," he said.

Astrologer Nicols said she had "no wish to take on a woman who is as accomplished as Julie Payette," whom she notes is a "feisty Libra with three planets in Scorpio."

But she did suggest Payette would be better to stick to what she knows.

"Astrology is not the stuff of horoscopes in newspapers, albeit I do write them," wrote Nicols in an e-mail. "It is actually a complex study based on mathematics. Not fairy dust falling from the stars."