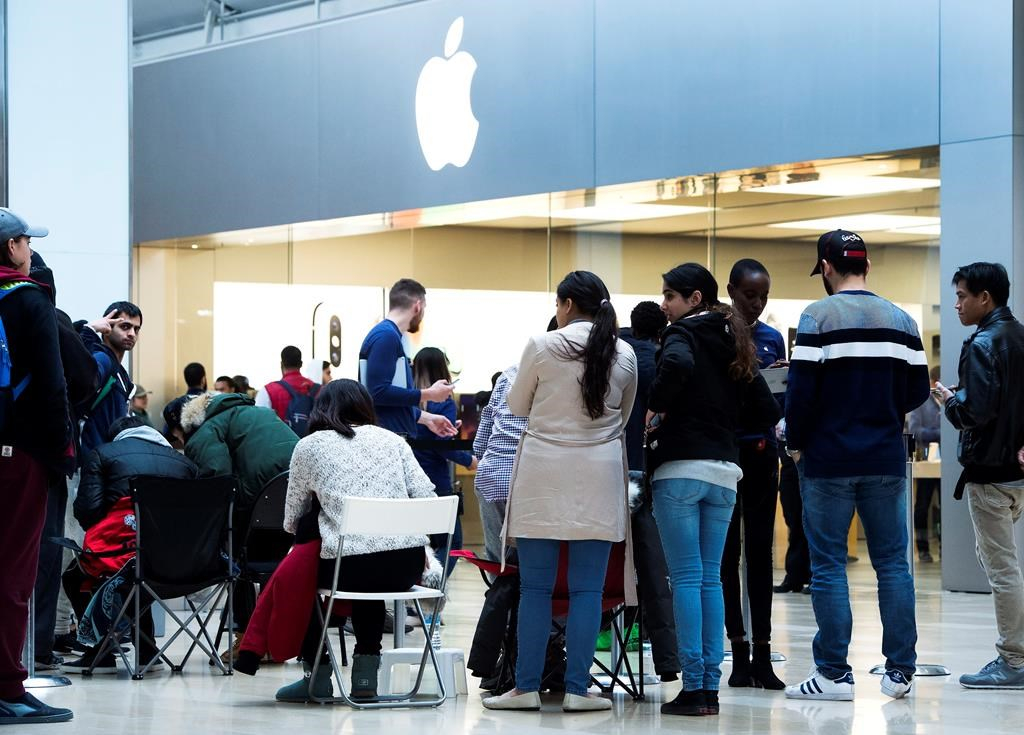 People line up for the new Apple iPhone X at the Square One Shopping Centre in Mississauga, Ont., on Friday, November 3, 2017. File photo by The Canadian Press/Nathan Denette
Previous story
Next story

A decade after Apple launched its original smartphone, the lineups at stores are back today as the ultra-expensive iPhone X comes to the market after months of anticipation.

In Canada, the smartphone with a lush screen and facial recognition technology is being listed between $1,350 or $1,570 before carrier discounts.

By comparison, the iPhone 8 that's been available since September is listed at $950 or $1,170 depending on memory.

Apple Canada says its stores are putting on extra staff and opening at 8 a.m. local time to handle the anticipated crowds.

It won't disclose how many devices it expects to have available on the first day, although each store has some of the newest Apple smartphones available for walk-up customers.

In addition, customers who pre-ordered the phone early enough through Apple will be given time slots for picking up their device. The device will be available through other retailers and wireless network carriers.

Even with the iPhone X's delayed release, Apple is still struggling to catch up.

Apple is now giving delivery times of five to six weeks for those ordering in advance online. Most analysts are predicting Apple won't be able to catch up with demand until early next year.

They say Apple's suppliers haven't been able to manufacture the iPhone X quickly enough due to advanced components such as its new type of screen and facial recognition technology.

However, CEO Tim Cook said on a conference call with analysts Thursday that Apple is increasing its iPhone X production capacity and expects the coming year-end holiday season to be "our biggest quarter ever."

That was down from the comparable period two years earlier, when Apple shipped 48 iPhones, but up from 45.5 million at the same time last year after the iPhone 7 came out.