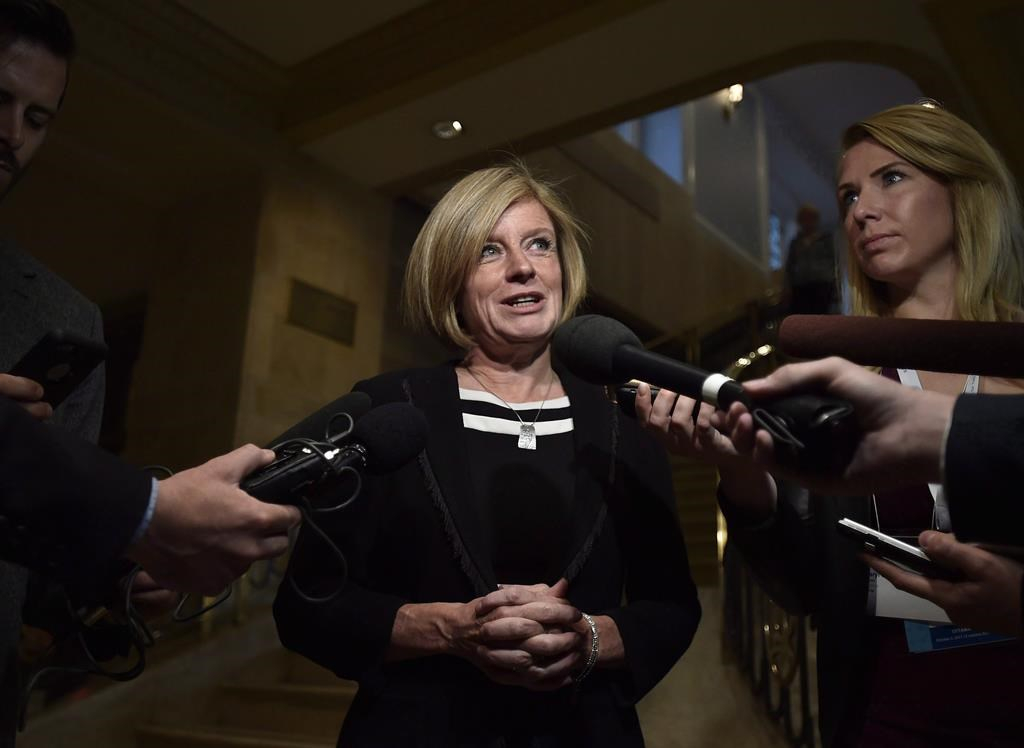 The City of Burnaby, B.C., hasn't issued necessary permits to allow Kinder Morgan Canada Ltd. to expand its pipeline from the Edmonton area to a tank farm and port in Burnaby.

Trans Mountain wants the board to clear the way for work to begin and Notley shares that view.

"We are going to push very hard to have that matter heard very quickly, because we think they are overreaching extensively. We should not be allowing projects that are of such national significance to be held up by municipalities using laws for purposes for which they were not intended," Notley said Friday.

"The position of the municipality in that case is not very strong. Delay is not helpful and playing around with authorities in order to create delays is not the way to go."

Kinder Morgan has said that Burnaby's "failure to act in a timely manner raises serious issues of jurisdiction'' related to the $7.4-billion pipeline expansion.

The company also wants the board to set up a way to make an "expedited determination'' about similar complaints in the future.

Alberta, British Columbia, and Saskatchewan have all indicated they want to intervene in the Burnaby permit proceeding, the board said Friday.

"The chair of the board has authorized a panel to deal with this matter," board secretary Sheri Young said in a letter.

Saskatchewan Justice Minister Don Morgan said the interprovincial pipeline has already been approved and shouldn't be held up by a municipality.

He said Burnaby is deliberately slowing down an important project for an industry that is just starting to recover from sluggish oil prices.

"Saskatchewan has consistently taken the position that once an interprovincial pipeline has been approved by the federal government, provinces and municipalities should not be able to interfere," Morgan said in a statement.

"Our government will continue to advocate for an expansion of pipeline capacity across Canada."

"The more people that can be engaged in it (the hearing), the better. As I've said, we're not particularly interested in pursuing a delay in that matter."

Kinder Morgan already has energy board and federal approvals to twin the pipeline, more than tripling its capacity, but CEO Steve Kean said recently delays in permits and regulatory approvals mean the project could be almost nine months behind schedule.

Notley said she doesn't see a need for any further intervention by the federal Liberal government.

"You have to respect the role of the NEB to a certain degree, so if you push too hard and you undermine the process such that it then becomes subject to challenge, that's not helpful either," she said.

"We know the federal government has made the decision that the project is to go ahead. That's what we needed to have happen. I think they are also working fairly hard on the issues that remain of concern to people in B.C."

Notley said she will continue her arguments on the importance of Trans Mountain when she visits British Columbia later this month.