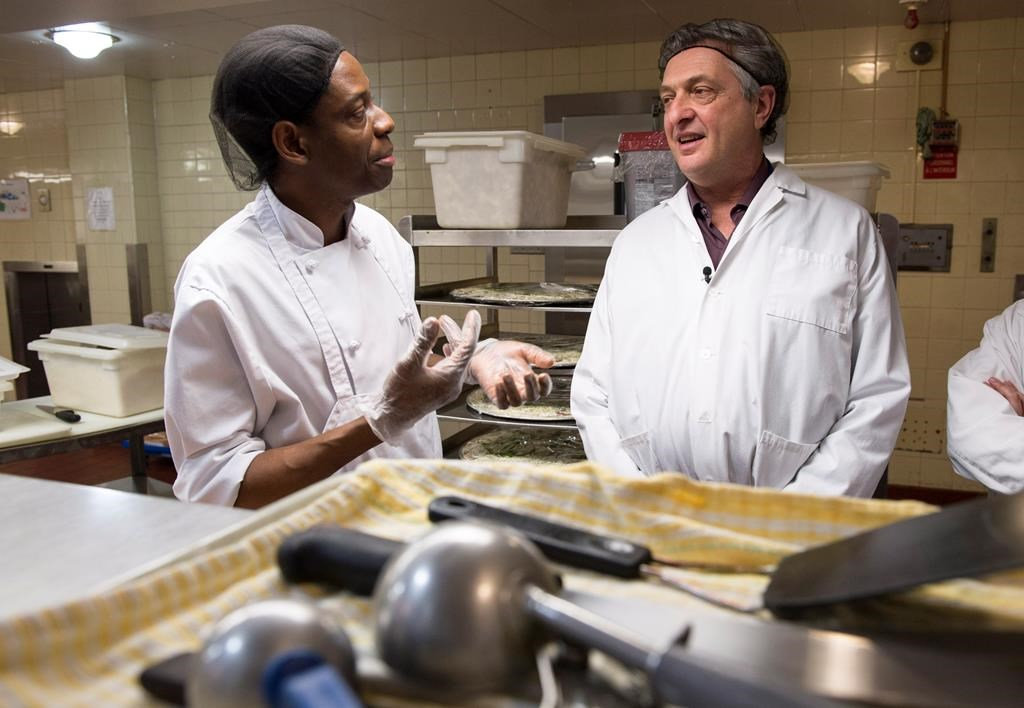 Filippo Grandi, the UN high commissioner for refugees, right, meets with Jean-Claude Puati, 40, a refugee from the Democratic Republic of Congo, while at work in a hospital cafeteria on Nov. 3, 2017 in Montreal. Photo by The Canadian Press/Paul Chiasson
Previous story

The United Nations High Commissioner for Refugees says Canada's reputation on refugee matters is solid, but he's hoping it can do even more.

Filippo Grandi said Friday he believes Canada can maintain its champion role by ramping up resettlement programs to help share the burden with countries facing an influx of refugees needing a new home.

That doesn't appear to be in the cards, however, as the federal government announced this week the number it will take via the UN will remain the same, although it will increase the number of privately sponsored refugees.

It expects to take in 43,000 refugees next year — 3,000 more than this year — but the number of government-assisted refugees will remain stagnant at 7,500.

Grandi said he will call on the federal government to go further when he meets with officials Monday.

"It's a positive message because Canada is an important, leading country in refugee matters from every perspective," he said in Montreal where he attended several events and met a resettled refugee who works at a local hospital.

"Positive, but also that Canada can do more and must to keep that position."

Grandi highlighted the case of Jean-Claude Puati, 40, who has been in Canada for two years and works regularly as a cook at Notre-Dame Hospital.

He left his native Congo because of his homosexuality and went first to South Africa before facing discrimination and coming to Canada.

"It's not easy, because coming here people are a bit reserved to begin with," said Puati, who has built up a social network and calls his time in Canada far more positive than negative.

"There's a lot of opportunity here and I'm looking toward the future with a lot of hope."

Grandi said Puati's is the kind of case he wants to see Canada further embrace and that he would like the country to help LGBTQ members, women, rape victims and unaccompanied children.

On Thursday, the custodian of the UN refugee convention appealed to the Security Council to do more to prevent and resolve conflicts and work toward peace.

"They heard, I hope they listened," Grandi said.

Grandi said he hopes Canada, which has an interest in securing a council seat, will move to restore its multilateralist reputation and global peacekeeping role.

Asking Canada to do more comes as the United States moves to cut by half the number of UN-referred refugees. The United States remains a leader in accepting refugees, but Grandi called the American trend worrisome.

Ninety per cent of refugees are in the poorest countries and resettlement is a way to lessen their load.

"What signal do you give to those countries that bear the biggest burden: Ethiopia, Pakistan, Bangladesh, Kenya, Uganda," Grandi said.