Freeland was warned about 'fake news' before U.S. trip

By Carl Meyer | News, Politics | November 6th 2017
#98 of 138 articles from the Special Report: Secrets of Government 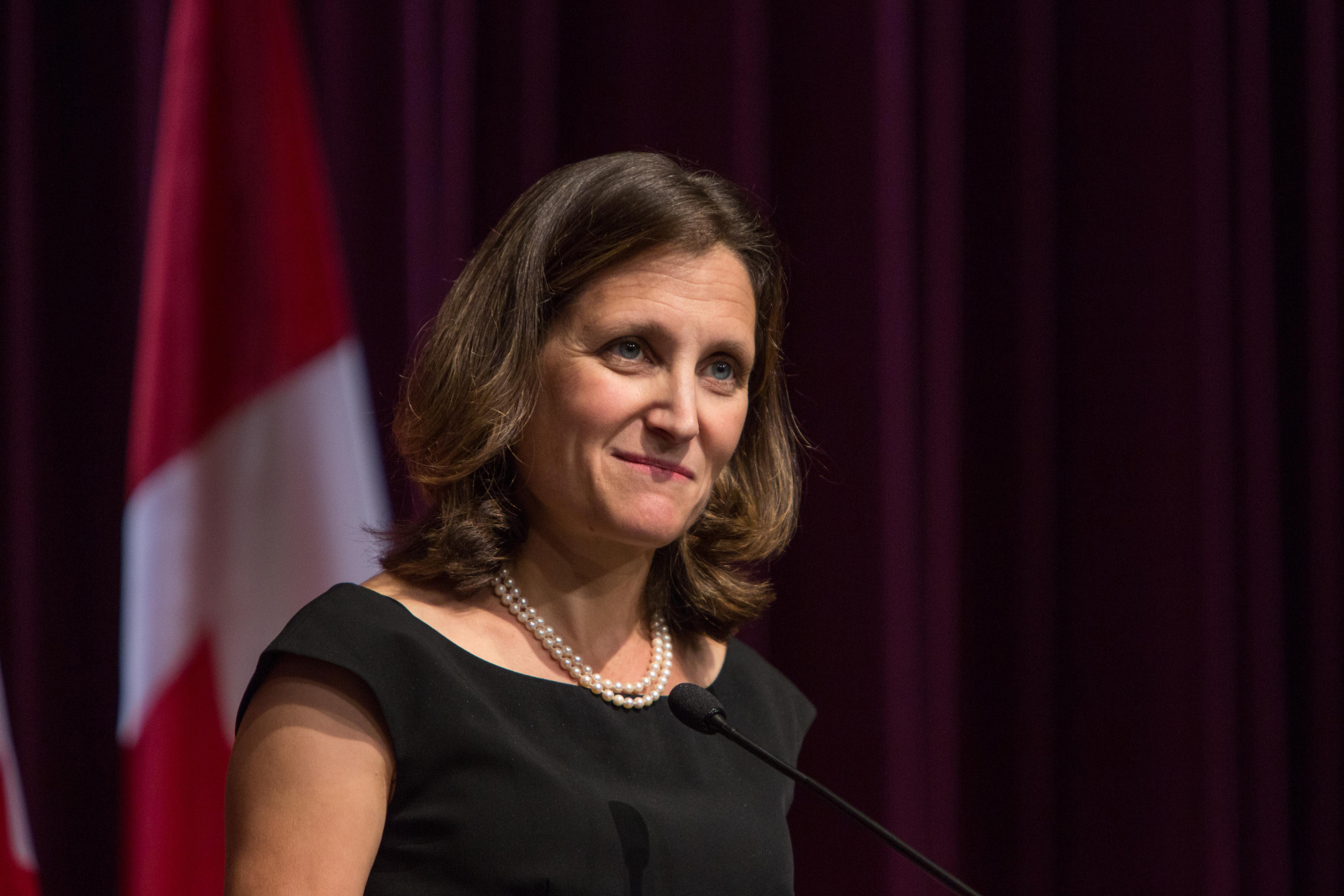 Foreign Affairs Minister Chrystia Freeland was warned of "hybrid warfare" tactics like "fake news" in a briefing note ahead of her visit to the United States this spring. Photo by Alex Tétreault
Previous story
Next story

Ahead of a recent visit to the United States, the federal minister was advised to beware of "fake news", "hybrid warfare" and other sophisticated tactics designed to achieve military and political goals.

The warnings were delivered in a newly-released federal government briefing note obtained by National Observer. It told Freeland that the tactics were becoming "increasingly of concern" to Canada and only the "tip of the iceberg" of the threats yet to come.

“While hybrid warfare is not a new concept, the manner in which some countries, such as Russia, have integrated the techniques, adapted them to 21st-century realities, and used them to pursue political-military objectives is increasingly of concern (e.g. in Georgia, Crimea and Eastern Ukraine)," said the briefing material, prepared prior to a trip that Freeland took to Washington, D.C., last May.

“Open societies are especially vulnerable, so we must make our national institutions and public as resilient as possible. Public education, awareness and engagement are key.”

The briefing note was released under Canada's Access to Information Act, which allows Canadians to review federal records upon request, after paying a $5.00 fee. Part of the briefing note was censored by the government, prior to its release, under a section of the access to information legislation that allows federal officials to withhold information that could damage Canada's international relations or security.

The briefing didn't appear to contain direct references to technology giants Facebook, Twitter and Google. These firms have come under fire for the role Russia-backed operatives played on their platforms during the 2016 U.S. presidential campaign.

But it does note that "cyberspace is a key domain for waging hybrid warfare, and cyber-infrastructure can be hacked or co-opted for information warfare / hybrid warfare purposes (to influence popular opinion)."

On Twitter, thousands of fake American accounts run by Russian actors have been operating for years supporting U.S. President Donald Trump, some launching into action "within weeks" of his 2015 announcement of a run for the presidency, a Nov. 6 analysis from the Wall Street Journal showed.

Tweets connected with accounts associated with Russian intelligence wound up embedded in tens of thousands of news articles in the lead-up to the election, NBC News reported. Dozens of celebrities and politicians were also duped into boosting these tweets, the news outlet said.

Meanwhile on Facebook, roughly 126 million Americans may have seen Russian posts intended to sway the election, the company admitted Oct. 30. And Google said in a blog post the same day that they, too, uncovered evidence of Russian-linked "efforts to misuse our platforms" during the election.

Beyond operatives posting and amplifying content, state institutions linked to Russian President Vladimir Putin also funded investments in Twitter and Facebook through an associate of Jared Kushner, Trump's son-in-law and White House adviser, according to leaked documents reported in the Guardian on Nov. 5.

Russia has denied that it attempted to sway the election.

‘Blurring the lines of truth’

The briefing note makes it clear that Canada considers “information warfare and cyber attacks" to be the “two main threats to Canada," besides conventional military threats.

“Hacking and fake news are only the tip of the iceberg," the note reads.

"Information warfare is about making people receptive to new ‘truths’ by making them uncertain about what they used to believe. Blurring the lines of truth is achieved by using fake news, distorting and omitting facts, spreading misinformation and simplifying complexity, among other things.”

Facebook has introduced a plan to prepare for possible threats from "bad actors" to the integrity of the next Canadian election, but the federal government's democratic institutions minister, Karina Gould, has said this is only the beginning of what's needed to protect Canada.

Freeland is well aware of "hybrid warfare." In June, ahead of a foreign policy speech, she said Canadians should be "mindful of the new challenges that hybrid warfare poses."

The minister, who is sanctioned by Russia and banned from entering the country, has also been targeted in social media campaigns over a family connection to a pro-Nazi newspaper. In March, she said "it shouldn't come as a surprise" if Russian tactics were used against Canada.

Canada has also infuriated Russia by passing the Justice for Victims of Corrupt Foreign Officials Act, which allows the government to freeze assets of foreign officials. It was modeled on the "Magnitsky law" after Sergei Magnitsky, a lawyer who the Canadian government says uncovered tax fraud subjected to "psychological and physical abuse that ultimately led to his death" in a Russian prison in 2009.

On Nov. 3, the Trudeau government put that law into action by sanctioning 30 individuals "linked to acts of significant corruption," saying Canada "long expressed deep concern" about what the Magnitsky case says about "the state of the Russian justice system and the rule of law."

Russia shot back the following day, with the embassy in Ottawa calling the decision to extend the anti-Russia sanctions "absolutely pointless and reprehensible" and "under the false pretext of hypocritically championing human rights."

"Isolating itself from one of the key world powers to please Russophobic lobby, while praising an international fraudster sponsoring his personal vendetta, brings Canadian foreign policy back to the narrow black-and-white worldview inconsistent with modern geopolitics," the embassy said.

Reached for comment on this story, Canada's foreign affairs department said it continues to monitor the situation "very closely."

The Russian Embassy in Ottawa accused the briefing note’s authors of hypocrisy.

"The said briefing note is a classic case of shifting blame, given the U.S. and its 'Five Eyes' allies, including Canada, unmatched cyber-capabilities and predilection for 'coloured revolutions' and regime change abroad," said Russian Embassy spokesman Kirill Kalinin.

Kalinin was referring to Canada's “Five Eyes” intelligence alliance with the U.S., U.K., Australia and New Zealand. Russia’s national security strategy states that foreign agents, non-governmental groups and economic structures seeking to destabilize Russia are behind the social movements called “colour revolutions” that emerged in post-Soviet states, according to the Center for Strategic and International Studies.

"Thanks to Edward Snowden and alike, the world is now aware of how the NSA and CIA globally eavesdrop on any device, and create malicious software to conduct hybrid warfare. This is the real issue unlike fake divergence fashioned by 'Five Eyes' themselves," Kalinin added.

Canada a ‘target’ due to Latvian mission

The briefing note says Canada anticipated being an “information warfare target” as a result of its NATO mission in Latvia.

Roughly 450 Canadian Army members have been deployed to Latvia since June 19, 2017 to lead a NATO battlegroup that also includes troops from Albania, Italy, Poland, Slovenia and Spain.

"Canada anticipates being an information warfare target as a result of its leadership in implementing NATO's enhanced Forward Presence strategy in Latvia," the briefing note states.

In the spring, Latvia's foreign minister also warned Canada to be ready to counter fake news when troops arrived. Sure enough, anti-Canada propaganda greeted the military upon arrival this summer, CBC News reported.

Canada’s defence policy, unveiled in June, notes that the country’s defence can be “affected by cyber threats at home and abroad.”

On Nov. 3, the Canadian military inaugurated its first “Cyber Operators,” a new designation of military personnel dedicated to cyber defence.

These soldiers will monitor communication networks and “contribute to active cyber operations in support of government-authorized military missions,” the defence department said.

This is fascinating and it'll

This is fascinating and it'll be interesting to see if the government will take this threat seriously, and, even if it does, what can be done. Google, Facebook, and Twitter say they are struggling to find ways to stop 'fake news'. Unfortunately, those who gamed the social networks to get Brexit and Trump will be working just as hard to keep it pumping.