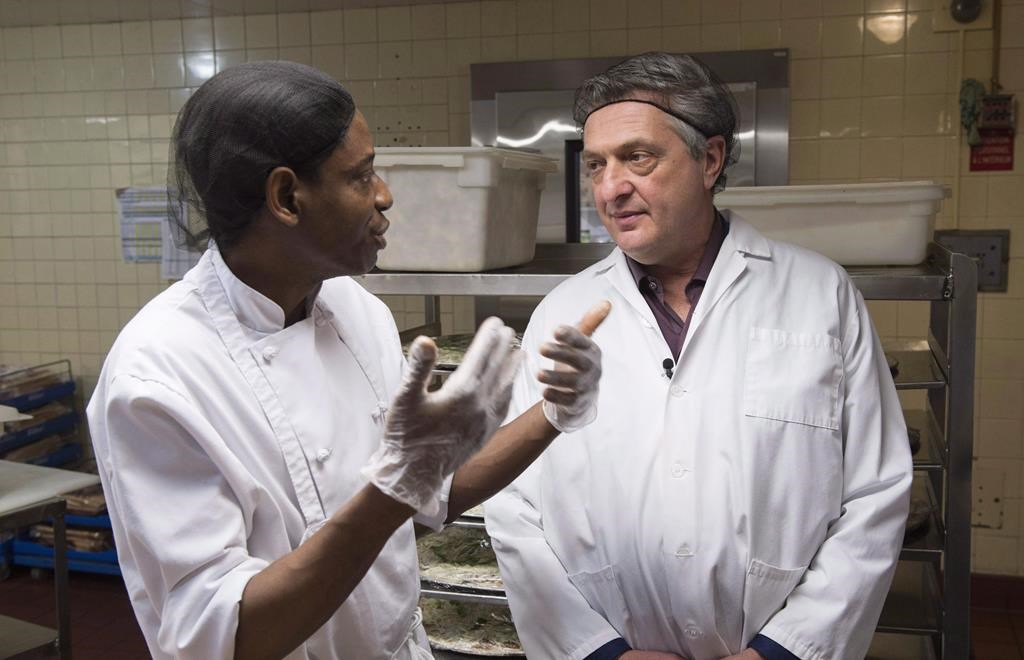 Filippo Grandi, the UN high commissioner for refugees, right, meets with Jean-Claude Puati, 40, a refugee from the Democratic Republic of Congo, while at work in a hospital cafeteria on Nov. 3, 2017 in Montreal. Photo by The Canadian Press/Paul Chiasson
Previous story
Next story

With the future of the Immigration and Refugee Board under review, one thing is certain, the head of the United Nations refugee agency said Monday: it needs to remain independent.

"You have a body in this country that is insulated, relatively well insulated, from political pressures," Filippo Grandi said in an interview. "And I think that's important, especially at this time of great politicization."

The board has for months been struggling with a rapidly growing caseload, pushing wait times for hearings from weeks to months.

In June, Immigration Minister Ahmed Hussen ordered a full review of the arms-length tribunal, and that was even before a surge of asylum seekers at the border placed additional pressure on the board's decision-makers. In August, more than 2,300 claims were filed from border crossers, and a further 5,390 were filed in September.

One idea under consideration is whether the Immigration department itself should take over the refugee determination process.

Grandi said he echoes concerns from advocates who say that could risk politicizing the process.

"The board has to remain independent, this for us is very, very important," he said.

Hussen indicated that eroding the board's independence would not be the goal of the review, but the UN is taking a wait-and-see approach, Grandi added.

"We'll have to see what is the detail of this simplification."

Grandi is UN's chief agent in charge of finding settlement spaces for a relative handful of the more than 60 million people currently displaced by conflict and strife worldwide.

He arrived in Canada late last week hoping to be able to cheer the Liberal government for increasing its own intake in the face of dwindling spaces — the U.S. is cutting theirs by half.

What Grandi knows now is that the numbers here will increase by just 4,700 between 2018 and 2020 for a total of 31,700 resettled refugees that year. This, after the landmark Syrian refugee program saw upwards of 25,000 Syrians resettled to Canada in a matter of months.

Grandi shrugged diplomatically when asked if he was disappointed. He said he can count on his fingers the countries that support the UN like Canada does, and he's grateful for the help. The current plan for refugee settlement is good and progressive, he said.

"But I think Canada can do more."

So, he's trying a different tack, urging Prime Minister Justin Trudeau to partner with the refugee agency to create a targeted settlement program for women at risk, not linked to any specific country.

Grandi said he'd prefer such a program be run outside the normal refugee intake plan.

Grandi and Trudeau met briefly Monday, and discussed "the need to protect and support refugees at a time when needs are especially high," a spokesperson from the Prime Minister's Office said in a statement.

Conservative immigration critic Michelle Rempel said the Liberal government ought to take no instruction from the UN as to how many refugees Canada admits.

Rempel has been a vocal critic of the UN refugee referral process, arguing it fails to adequately provide resettlement options to some of the most vulnerable.

"The government must also request that the UN reform its refugee selection process to prevent discrimination against minority groups and to better support internally displaced persons and genocide survivors," she said in a statement.

Among the other issues Grandi raised was Canada's ongoing approach to immigration detention.

He said he was pleased to see Public Safety Minister Ralph Goodale issue a first-of-its-kind directive Monday on the detention of minors, clearly instructing border officers to take the best interests of the child as their first priority.

"We are campaigning first and foremost for no detention of children asylum seekers, but also no asylum seekers to be put in detention," Grandi said. "This is a bit of longer term (plan), but I think children — I think the minister is very serious in reducing it."