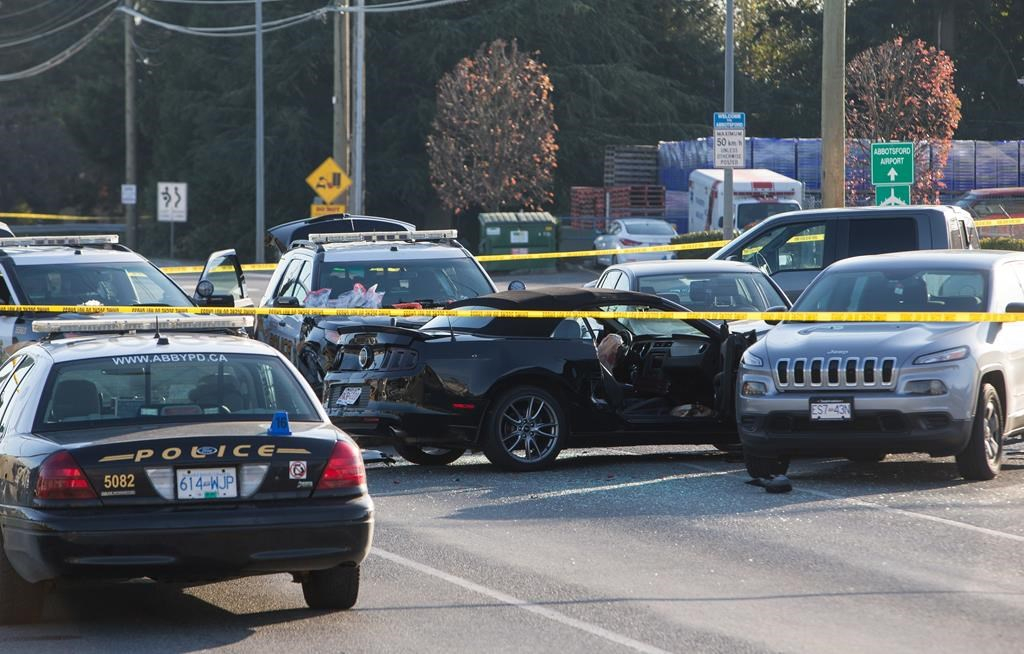 Police officers investigate the scene of a shooting that left one Abbostford Police officer dead in Abbotsford, B.C., on Monday, November 6, 2017. Photo by The Canadian Press/Ben Nelms
Previous story
Next story

A British Columbia police officer is being remembered as a "hero" after he died Monday in an exchange of gunfire with a man accused of shooting at people in a parking lot.

Chief Bob Rich of the Abbotsford Police Department said officers were called about a possible stolen vehicle in the parking lot of a shopping complex at about 11:30 a.m.

The caller blocked the suspect's vehicle in while waiting for police to arrive, Rich said.

"Unfortunately, a male suspect emerged from that vehicle and began shooting at the caller and others with a shotgun," Rich said at a news conference.

There were several 911 calls reporting the shooting and police officers arrived in the area and attempted to engage with and arrest the suspect.

"There was an exchange of gunfire," Rich said, and one officer was taken to hospital with "very serious injuries."

"The horrible part of this story, our injured APD officer was pronounced dead at the hospital shortly after he arrived."

The suspect, a man in his 60s from Alberta, fled in the vehicle and police officers pursued him to the intersection of Mt. Lehman Road and Fraser Highway, Rich said. The man was apprehended and taken to hospital for treatment of non-life-threatening injuries.

The deceased officer's name has not been released.

Rich said the investigation will continue and there are still many questions left to be answered. He said the police department's priority will be supporting the officer's family and each other.

He said he met with the officer's spouse and delivered the "horrible news face to face."

"The officer who gave his life today is a hero. He was protecting this community. He will always be my hero."

An employee at a nearby vehicle dealership said the fatal shooting is connected to a sports car that was allegedly stolen over the weekend.

George MacDonald, a manager at MSA Ford in Abbotsford, said a man came in to test drive a Mustang around 9 a.m. on Saturday and drove off without leaving his driver's licence.

Shortly before noon on Monday, a dealership employee noticed the vehicle parked about 400 metres away at a restaurant, MacDonald said.

"One of my guys blocked the car in until the Abbotsford police came and before the police came the guy came back with a rifle and decided he wanted the car back," McDonald said. "The truck took two or three bullet holes."

McDonald said he left to return a key to the dealership minutes before the shooting took place.

"I did 20 years in the military but I'm not used to anything like that happening this close to home," he said.

The Independent Investigations Office, which looks at all officer-related incidents that result in serious harm or death, sent its investigators to the scene. The office says it's believed the suspect was shot.

Premier John Horgan issued a statement on Twitter expressing his condolences to the family of the police officer.

"Deeply saddened to hear of the death of an Abbotsford police officer today. My heartfelt condolences go to the family, friends and colleagues," he said.

"As British Columbians, we are filled with grief at this tragic loss and give gratitude to those who put their lives on the line for us."

— With files from Geordon Omand and Laura Kane