US at climate talks may be like unhappy dinner guest 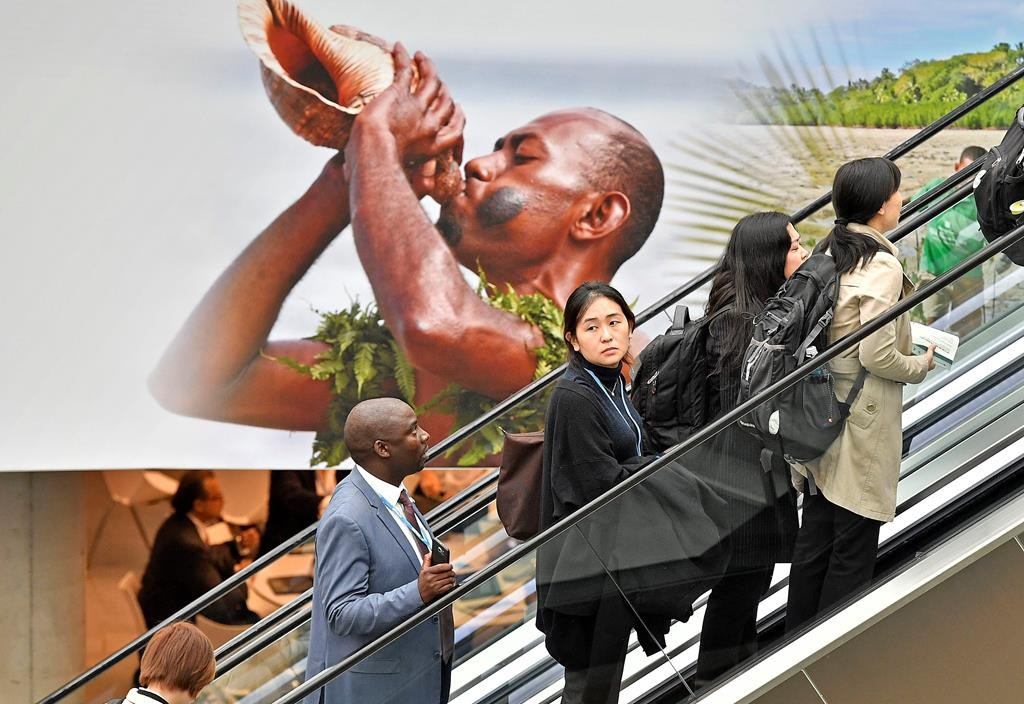 Delegates arrive at the convention center during the COP 23 Fiji UN Climate Change Conference in Bonn, Germany, on Monday, Nov. 6, 2017. Photo by The Associated Press/Martin Meissner
Previous story
Next story

How's this for awkward? The United States has a delegation at international climate talks in Bonn that will be telling other nations what they should do on a treaty that the president wants no part of.

President Donald Trump has promised to withdraw the U.S. from the 2015 Paris climate pact where nations set their own goals to reduce the emissions of heat-trapping gases, but because of legal technicalities America can't get out until November of 2020.

"It's like having a guest at a dinner party who complains about the food but stays anyway," said Nigel Purvis, who worked climate issues in the State Department for Presidents Bill Clinton and George W. Bush — and dealt with a similar situation.

In 2001 Purvis was a climate negotiator for the U.S. State Department when the new president, George W. Bush, had pulled out of a landmark global warming agreement the previous administration had championed.

The U.S. position is not just awkward, it's potentially bad for the environment, scientists say.

Most of the Bonn meeting will be coming up with rules on how countries report emissions of heat-trapping gases and how transparent they are. The United States used to be the leading force in pushing for tougher rules and more openness, Purvis and other experts said. The rules probably won't be as strong now, Purvis said.

"If it's left to Chinese leadership, which is what's left, you will have less transparency," said Massachusetts Institute of Technology management professor Henry Jacoby, who co-founded the Joint Program on the Science and Policy of Global Change.

The United States government is becoming increasingly isolated on climate change. On Tuesday, the Syrian government, mired in war and the last United Nations country not to sign the Paris accord, announced it would sign the pact. That means the United States will be alone when it pulls out.

State Department spokeswoman Heather Nauert responded to the Syrian decision by attacking its government. "If the government of Syria cared so much about what was put in the air, then it wouldn't be gassing its own people," she said.

In a not-so subtle jab at Trump, French President Emmanuel Macron plans a separate "One Planet Summit" in Paris to push his "Make Our Planet Great Again" agenda on Dec. 12, the anniversary date of the climate accord. He invited more than 100 world leaders to his event, but not Trump. Instead, he invited lower level U.S. diplomats.

"The rest of the world needs to get on and negotiate ... and treat the U.S. as more of an observer in the process and the U.S. should act that way," said Greenpeace International Director Jennifer Morgan, who has been at these negotiations for more than 20 years.

That's not what the U.S. plans.

As meetings started on Monday, U.S. negotiator Trigg Talley said, "The president has made clear that we will engage countries on energy and climate change related issues and we look forward to working with colleagues and partners to advance the work here over these two weeks and beyond."

The administration is hosting a panel on "the clean and efficient use of fossil fuels and nuclear power," White House Deputy Press Secretary Raj Shah said Tuesday. "It is undeniable that fossil fuels will be used for the foreseeable future, and it is in everyone's interest that they be efficient and clean."

Of the major fossil fuels, coal is by far the biggest climate change culprit. In 2014, coal accounted for 46 per cent of the globe's carbon dioxide emissions, but was only 29 per cent of its energy supply, according to the International Energy Agency.

Three U.S. governors, some mayors, corporate leaders and students will also be attending the Bonn talks.

"We have one major major player who is on the sidelines," California Gov. Jerry Brown told The Associated Press. "The rest of us will do everything we can to keep advancing efforts and keep doing what is needed to reduce carbon emissions. There is no time to wait."

Nashville, Tennessee, Mayor Megan Barry said, "the power lies within cities ... we know that we can make a significant difference with or without the federal government."

If the U.S. remains out of the Paris accord and tries to dismantle President Obama's initiatives to curb emissions, the Earth will warm by an additional one or two tenths of a degree, said Glen Peters, a Norwegian scientist who is part of the Global Carbon Project.

Scientists say that even a few tenths of a degree of warming can have dramatic impacts on ecosystems and even day-to-day life for people.

Purivs said "countries will be frustrated and resentful" toward the Trump administration at the negotiations. But he added: "Many nations will understand the rules of the Paris agreement are going to be more important and more durable than any U.S. administration and there will be a strong desire to get it right."

Frank Jordans in Berlin, Maria Murru in Rome and Matt Lee and Zeke Miller in Washington contributed to this story.

Resisting a climate of misogyny

By David Suzuki | Opinion, US News, Energy, Politics | November 8th 2017
Reports from the Race to a Safer World

By Michael Biesecker | News, US News, Energy, Politics | October 24th 2017
Reports from the Race to a Safer World