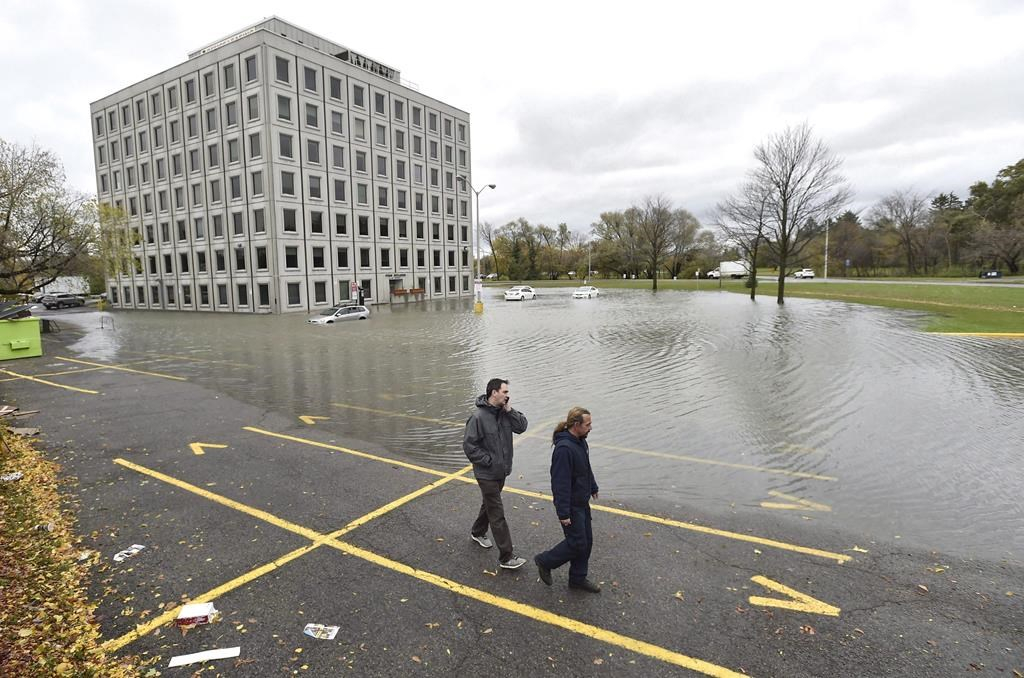 People walk past the flooded parking lot of the Pebb Building, located across from the Ottawa River, following a rain storm in Ottawa on Monday, Oct. 30, 2017. Photo by The Canadian Press/Justin Tang
Previous story
Next story

The National Research Council says Canada's homes and highways were built with assumptions about weather patterns that are no longer relevant, thanks to climate change.

Now the NRC is asking for help to figure out what kind of weather to expect in the coming years, so it can revamp national building codes to ensure everything from houses and office towers to bridges and wastewater systems can withstand the consequences of a warmer planet.

"Canada’s buildings and public infrastructure systems ... are designed based on historic data assuming a stationary climate, and were not designed to accommodate certain extreme weather events being attributed to climate change," reads a Nov. 6 tender issued by the council.

"As such, there is a growing risk of failure of buildings and infrastructure."

From melting permafrost and coastal erosion due to higher sea levels in the north, to the unusual warmth and dryness of the summer in British Columbia this year, experts say Canada has already started to bear witness to the effects of climate change.

Prime Minister Justin Trudeau warned about the increasing frequency of extreme weather last spring while he was touring homes in western Quebec damaged by the engorged Ottawa River.

The costs faced by the federal disaster financial assistance program have also soared. Since 2011, the program has spent an average of $360 million a year, three times what the average annual cost was over the previous decade. Most of that is for floods and forest fires.

Adapting the building code to mitigate and adapt to new weather patterns is one of the commitments of the national climate change framework, agreed to by Ottawa and 11 provinces and territories almost a year ago. In the spring budget, Ottawa set aside $40 million over five years for the NRC's five-year climate-resilient buildings project.

But before the building codes can be adapted, the NRC needs to know what kind of extreme weather to expect.

The tender seeks a consultant to update weather and climate data for 660 locations across the country, including expected temperatures, wind patterns, rain and snow fall, and humidity.

The successful applicant will work with the Meteorological Service of Canada as well as officials from Environment and Climate Change Canada to develop information about the expected impacts from average increases in global temperature from 0.5 degrees Celsius up to a maximum of 5 C.

The earth has already warmed up more than one degree on average compared to preindustrial levels and the Paris climate change accord commits the world to trying to keep it from hitting two degrees by the end of the century.

The tender closes Dec. 11 and the NRC expects work to begin on the project in January.

A conversation with Elliott Cappell, Chief Resilience Officer of the City of Toronto

Sea level is rising and there

Sea level is rising and there is nothing anyone can do about it because of the long time constants in the system. How much will it rise? The IPCC worst case suggests about a metre by 2100, but one must read the fine print; there are things that people do not know how to model and these could lead to larger rises. An example of this is the melting of the West Antarctic glaciers; these are stoppered by the ice shelf and if that melts the glaciers will come down and raise sea level another three metres or so. See “High Tide on Main Street” by John Englander.