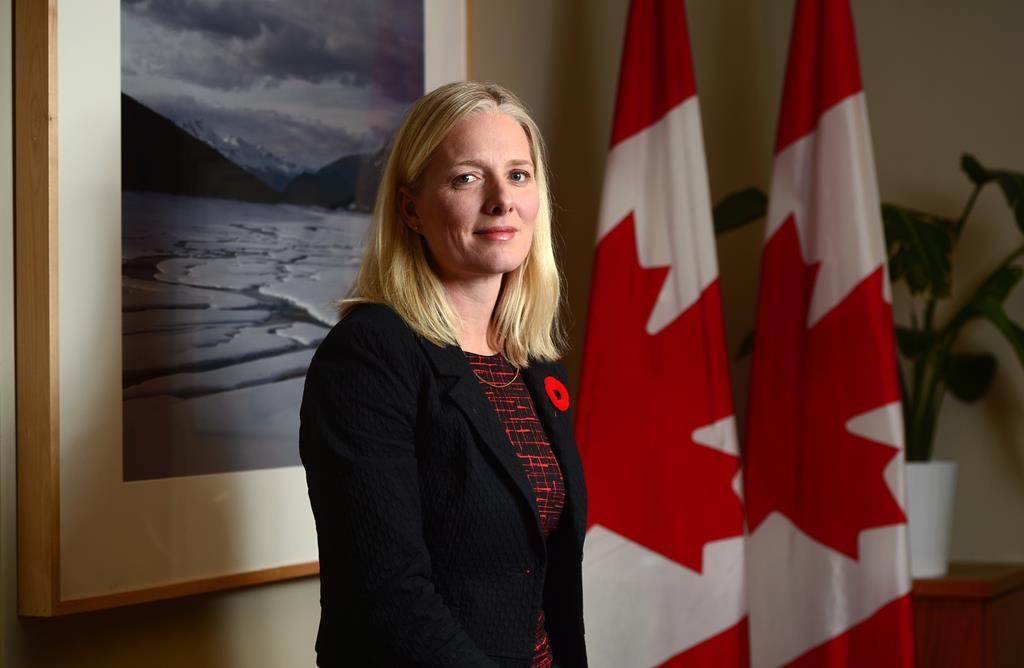 Minister of Environment and Climate Change Catherine McKenna poses for a photo in her office on Parliament Hill in Ottawa on Tuesday, Nov. 7, 2017. File photo by The Canadian Press/Sean Kilpatrick
Previous story
Next story

A U.S. effort to stoke the fires of coal-powered electricity didn't escape the attention of Canada's environment minister Monday as Catherine McKenna used her Twitter account to troll the carbon-based fuel just as American officials were extolling its virtues.

McKenna is in Bonn, Germany, for the 2017 United Nations climate change talks, where the rules for implementing the 2015 Paris accord are being hammered out — and where she and British counterpart Claire Perry hope to convince the world to abandon coal-fired power.

By contrast, the United States — with President Donald Trump at its helm — has famously promised to "end the war on coal."

Having declared his intention to pull the U.S. out of the Paris accord, Trump dispatched George David Banks, his special assistant on energy and the environment, to Bonn to host an event promoting coal, natural gas and nuclear energy, as well as technology that can reduce their impact on the environment.

Speaking in Manila Tuesday where he is attending the Association of Southeast Asian Nations summit, Prime Minister Justin Trudeau pulled no punches by calling coal the "dirtiest of all fossil fuels."

"Let me be very blunt about this. Coal represents perhaps the greatest challenge to the world not meeting its climate change targets," Trudeau said. "Unless we reduce coal consumption, we are not going to be able to prevent catastrophic global warming."

The International Energy Agency forecasts global demand for coal and natural gas will not diminish over the next 25 years, Banks said Monday. Coal already produces two-fifths of the worlds energy supply, and another 1,600 coal plants are in the works right now. And by 2040, Southeast Asia will get half its power from coal plants.

"Without a question, fossil fuels will continue to be used and we would argue that's it's in the global interest to make sure that when fossil fuels are used, that it's as clean and efficient as possible," Banks said.

He acknowledged as "provocative" the decision to promote fossil fuels at an international climate change conference, but argued that while renewables have a bright future, much of the necessary innovation to store and transmit power from wind and solar sources is still in its infancy.

"Before that innovation is realized, the idea that the world can somehow meet ambitious mitigation goals, support development in poor countries the way we should and ensure energy access by only deploying solar and wind is naive."

All the while, McKenna was on her Twitter account, extolling the virtues of alternatives to coal in a series of tweets that stood in sharp contrast to the U.S. position.

"Burning coal responsible for 41 per cent of our global emissions," McKenna tweeted. "The largest single source worldwide. Phasing out coal represents a massive opportunity and #ClimateAction."

Coal, she continued, is "the most powerful fossil fuel in the world. We must all work together to get off fuel and transition to cleaner forms of energy."

Some 23 countries, states and cities have either already phased out coal or have a plan to do so, including Canada, she further noted to her followers. "In less than a decade, solar will be cheaper than coal in China, India, Mexico, the U.K. and Brazil."

Many environmental activists argue there is no such thing as clean coal, though even McKenna and Perry's alliance appears to allow for coal if it's accompanied by carbon capture and storage technology.

Canada, where coal accounts for about one-tenth of the electricity supply, has committed to phasing out coal power plants by 2030, as has the Netherlands. The U.K., Italy and France all plan to get rid of it by 2025.

Trudeau said in Manila that Canada has taken "significant steps" in phasing out coal and will continue to ensure those efforts are successful.

"We are investing in renewables, we are moving beyond it ... we are committed to working with our international partners, with our friends and allies, to reduce coal consumption, to reduce emissions related to coal and to find alternatives that are less polluting."

In some ways, however, Banks's message was not entirely different from Canada's position on oil under Justin Trudeau's Liberal government.

Natural Resources Minister Jim Carr has said many times neither Canada nor the world will eliminate fossil fuel use overnight, and that Canada's oil resources will be produced and transported in a sustainable way, remaining an important part of global systems for many years to come.

"We need to ensure we are creating much greater energy efficiencies while at the same time, ensuring the way we are extracting and processing and using these fuels has the minimal impact on the environment," Trudeau said.

"That's hardest to do with coal, but we recognize there is much to do to improve our efficiencies and our cleanliness or the lowering of emissions around all fossil fuels."

— With files from Andy Blatchford in Manila.

There is absolutely no excuse

There is absolutely no excuse for using coal. Burning natural gas produces half of the carbon dioxide that burning coal does to generate the same amount of heat. There is a plentiful supply of natural gas. This assumes that the fugitive emissions that occur with natural gas extraction can be greatly decreased.
This is of course only for a temporary transition to zero carbon dioxide and methane emission.