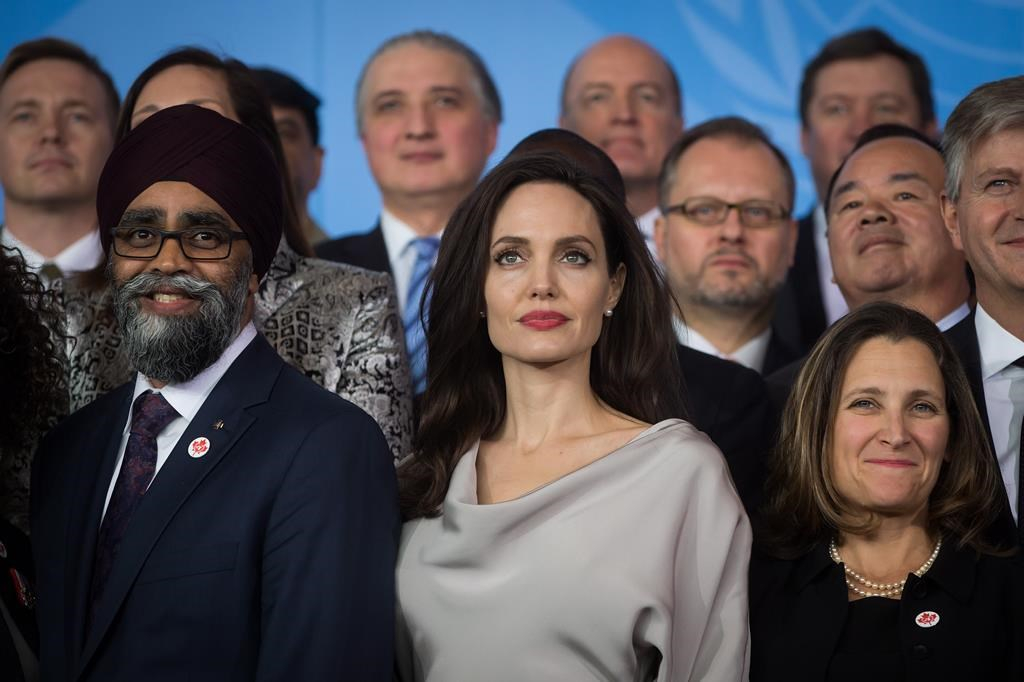 UNHCR Special Envoy Angelina Jolie stands with Harjit Sajjan and Chrystia Freeland during the family photo with delegates at the 2017 U.N. Peacekeeping Defence Ministerial conference in Vancouver, B.C., on Nov. 15, 2017. Photo by The Canadian Press
Previous story
Next story

Angelina Jolie delivered a stinging rebuke Wednesday of global efforts to stop the use of sexual violence in war and called on the UN to finally help turn the tide.

The meeting also saw a renewed push to prevent the use of child soldiers and better protect children caught in conflict, as attendees unveiled a series of commitments signed by 53 countries.

Canada played a key role in advancing both conversations as host of the meeting and by pledging $21 million to increase the number and role of women in peacekeeping missions and military operations.

The pledge was made amid a growing recognition that female personnel are essential when it comes to many peacekeeping tasks, such as helping victims of sexual violence and interacting with local women in the field.

It also coincides with ongoing concerns about peacekeepers themselves sexually abusing or exploiting the very populations they have been ordered to protect.

Yet only 7 per cent of the 13,000 police officers deployed as peacekeepers and two per cent of the 87,000 military personnel are women, and those numbers have remained stagnant despite promises to double them.

During her address, Jolie, who is also a special envoy for the UN High Commissioner for Refugees, listed the many promises, laws and resolutions that have failed to eliminate sexual violence from war.

And she didn't pull any punches as she blasted the UN's failure to increase the number of female peacekeepers deployed on missions, or its efforts to stop peacekeepers from sexually abusing vulnerable populations.

"It has 21 years since the UN first promised to address sexual abuse by UN peacekeepers and to increase the number of women deployed in operations," she said.

"Yet the exploitation of defenceless civilians still takes place. And still less than four per cent of all peacekeepers are women."

But there was also an acknowledgment that a cultural shift is afoot, with Jolie saying that many military leaders have started "to address the taboos around these issues and to take action."

Canada along with the United Kingdom and Bangladesh were singled out for special mention for promising to work together to increase the number of women and better incorporate gender perspectives in their militaries.

That initiative was only one of several unveiled by the Trudeau government on Wednesday, along with a pledge of $21 million to boost the number of women in peacekeeping operations around the world.

The money included $6 million to help with reforms at the UN and $15 million for a new trust fund that will be used to help countries increase the number of women in their respective militaries.

The money could be used to facilitate partnerships with other countries that already boast sizable female contingents, and provide incentives to increase the deployment of women into the field.

"I hope they are just the beginning," Jolie said. "We will not only strengthen our societies and improve peacekeeping."

By The Canadian Press | News, Entertainment, US News | September 13th 2017