Anna Paquin, Viola Desmond among those added to Canada's Walk of Fame 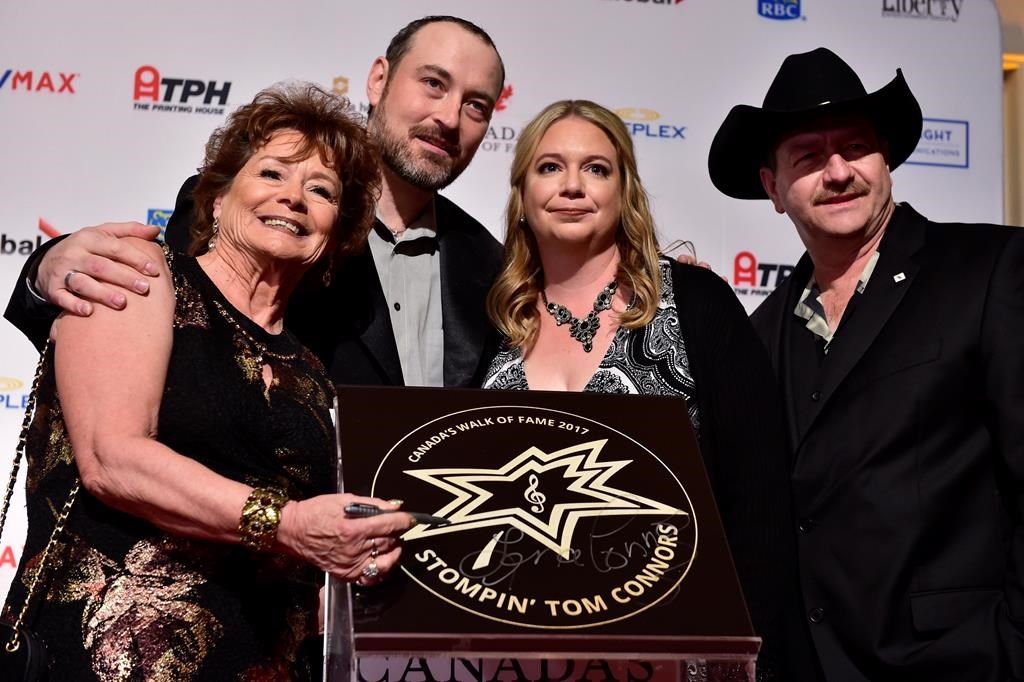 Members of Stompin' Tom Connors family unveil the late country singer's star at the Walk of Fame induction ceremony in Toronto, on Nov. 15, 2017. Photo by The Canadian Press/Frank Gunn
Previous story
Next story

Sprinter Donovan Bailey says he knows that his induction into Canada's Walk of Fame will affect the way he's seen by future generations.

"This is definitely a huge legacy piece for me," Bailey said from the red carpet alongside his 11-year-old son, Mateus, who presented his award.

"This is the gathering of the embodiment of success in Canada ... I'm quite humbled."

Bailey, of Oakville, Ont., was one of six people inducted into Canada's Walk of Fame in a ceremony in Toronto on Wednesday evening.

Suzuki said he has Canadian supporters to thank for his continued success. "I'm very pleased that there seems to be a sense that I deserve this recognition," he said. "This funny-looking science geek, that I could become a person they would trust and watch — that says something about Canada."

Suzuki "created environmental activism in this country," said Jim Cuddy of Blue Rodeo, his longtime friend, who was chosen to inducted him into the Walk of Fame.

"I think we're the better for it," said Cuddy, adding other countries continue to grapple with environmental issues.

But Suzuki said he doesn't necessarily think his recognition signals Canada's unwavering dedication to environmental causes. "The environment as a really major issue? I'm still waiting to see," he said.

Paquin, who at 11 became the second-youngest Oscar winner ever for her role in "The Piano," said she was "flattered and honoured" by her inclusion in this year's Walk of Fame, but that she was also "quite nervous for tonight."

Paquin, who was born in Winnipeg and raised largely in New Zealand, said she's proud of her recent work on Canadian productions. She appeared in Sarah Polley's TV adaptation of Margaret Atwood's novel "Alias Grace" and stars in the CBC crime drama "Bellevue."

"I've worked in Canada an awful lot, because so much shoots here, but it was amazing to get to be part of two completely Canadian productions," she said. "It was for Canadians, by Canadians, about Canadians.

"To get to experience firsthand the enormous amount of talent and creative power that Canada has to offer ... it's some of the work that I'm most proud of."

When asked about the barrage of sexual assault allegations coming out of Hollywood with startling frequency since the Harvey Weinstein story surfaced last month, Paquin said she's been thinking about it lot, but didn't feel a celebratory event like the Walk of Fame was the right place to start that discussion.

"I have so much to say about that ... I just feel like that's a much larger conversation than a quick catch-up on a carpet," she said. "But at some point, when I feel more comfortable, I have rather a lot to say about that."

Walk of Fame CEO Jeffrey Latimer said he wanted to include posthumous inductees in order to focus the event on people from Canada's past, and on people who have made social contributions that deserve more attention.

"I think that we've done a great job of celebrating stars," he says. But now, "we have to empower our young people to find roads to achievement, and find out ... how (an inductee) became a star, more than just what their fame was."

One of the first people who came to mind was Viola Desmond, the Nova Scotia woman who became a civil rights pioneer after challenging racial segregation at a movie theatre in 1946. Latimer admits he hadn't previously known very much about Desmond, who will appear on the new $10 bill in 2018.

"I learned a lot in the last few months," he said.

Desmond was inducted into the Walk of Fame by a group including her niece Dawn Millington, nephew Sydney Parris, Canadian actor Lyriq Bent, and Martin Luther King III, who travelled to Toronto from his home in Atlanta for the ceremony.

Desmond's story should be known because "every nation needs to understand its history," King said. "It's phenomenal that this woman is going to be on a $10 bill. Because she will be in the monetary system, young people will be asking: tell me more about what she represents, what she did."

When asked about Desmond's legacy, Bent, who starred in "The Book of Negroes," simply said, "We're living it.

"Whatever it is that you enjoy about your life, that is the legacy."

The gala will be broadcast next year, although a date has not yet been set. Global will air a one-hour retrospective special Dec. 3, hosted by "Will & Grace" star Eric McCormack.

In 'Defying the Nazis,' Ken Burns and Artemis Joukowsky document an inspiring story