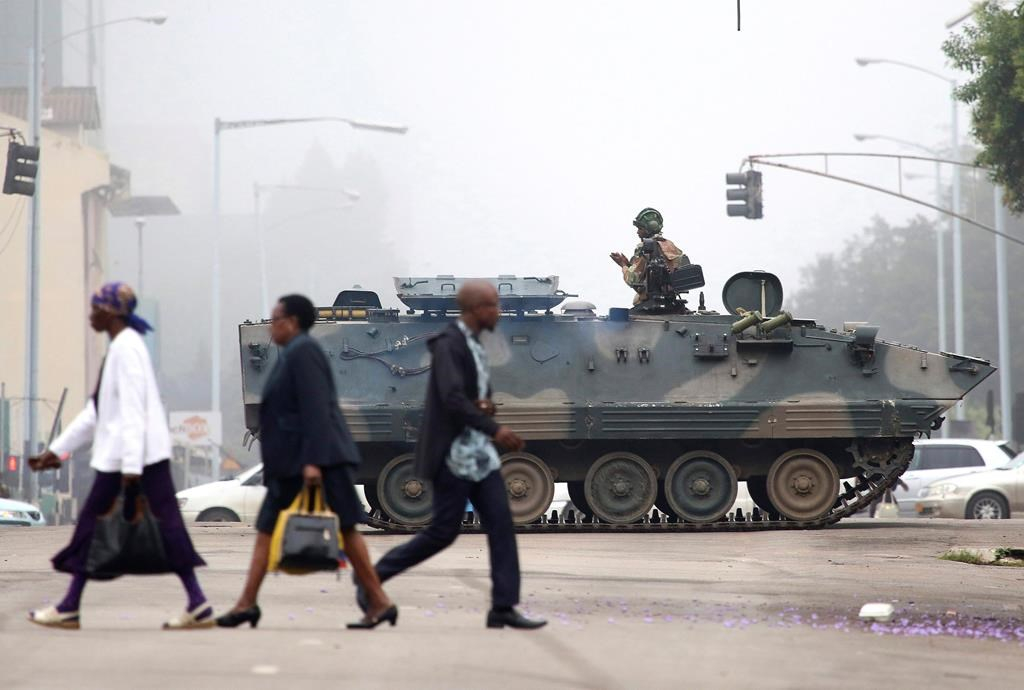 An armed soldier patrols a street in Harare, Zimbabwe, on Wednesday, Nov. 15, 2017. File photo by The Associated Press
Previous story
Next story

Members of Canada's Zimbabwean community say they're hopeful unfolding political turmoil in their homeland will bring about lasting change.

Zimbabwe's army said it has placed longtime president Robert Mugabe and his wife in custody and was securing government offices and patrolling the capital's streets following a night of unrest that included a military takeover of the state broadcaster.

The activity triggered speculation of a coup, but the military's supporters praised it as a "bloodless correction."

Zimbabwe Cultural Society of Alberta Chair Regis Musango says the army's actions could allow Zimbabweans to conduct peaceful, democratic elections in the near future and select a leader who truly represents the people.

Belinda Fernandez, who was born in Zimbabwe, says Mugabe’s arrest has her wondering whether a new government could take over, open up international trade and help all Zimbabweans, not just elites.

But Zimbabwean-Canadian Remedzai Kawadza says real change may not be seen until Mugabe's entire generation of politicians is gone.

Mugabe, 93, has been in power since Zimbabwe gained its independence in 1980.

The country's military says it did not stage a military takeover, and is instead starting a process to restore Zimbabwe's democracy.

Global Affairs Canada has advised Canadians in the Zimbabwe capital of Harare to stay indoors and monitor the media as events unfold.

Soldiers in armoured personnel carriers stationed themselves at key points in Harare, while Zimbabweans formed long lines at banks to take out cash. At least three explosions were heard in Harare overnight.

Mugabe has been long been accused of human rights violations, including increasing crackdowns on dissent, amid a deteriorating economy.

Last month, Prime Minister Justin Trudeau joined the United States and a host of other countries, as well as health and human rights leaders, in condemning Mugabe's appointment as a goodwill ambassador for the World Health Organization.

"Quite frankly I thought it was a bad April Fool's joke," Trudeau said last month after hearing the news.

The WHO removed Mugabe from that role after numerous organizations, including the World Heart Federation and Cancer Research U.K., said they were "shocked and deeply concerned" because of Mugabe's "long track record of human rights violations."

Trudeau condemns appointment of Mugabe as WHO ambassador